Turn Yo’ Headphones Up: A Tribe Called Quest [Mixtape] 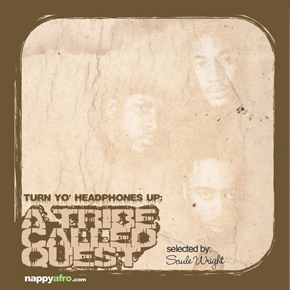 A few weeks ago, my homie Chew let it be known that he is not too familiar with A Tribe Called Quest. I took it upon myself to help my boy out as I think that the link between the older generation of Hip-Hop and the newer generation is missing, and that’s why there is no real sense of passing the torch or embracing the new sound.

Our generation got to a certain point, and vanished from the face of the game. They became ghost writers, producers, label heads, and some stepped away completely.

So, I thought, hey, why don’t I put together a tape that kinda of tells who this legendary group is. What the fuck was I thinking? How do you sum up 20 years and somewhere around 13 cds? It’s not easy when they already have a CD that contains all the commercial hits and cult classics. Then it hit me, you Turn Yo’ Headphones Up!

I put together what I think, is a fantastic album. I wanted to get those songs that most of us know, but a lot of songs that folks slept on and even a few that people have never heard. I combed all the albums including the 2 little heard Phife Dawg albums and the unreleased Kamaal The Abstract as well as a few mixes of the songs you already know and love. I hope you dig this look into the group. I am biased, but my headphones have been on blast since I made the FINAL rip. I hope you enjoy it. So Chew, nappyafro readers, and fans of Hip-Hop, this is for you. Turn Yo Headphones Up.

Download: Turn Yo’ Headphones Up: A Tribe Called Quest (Selected by by Saule Wright)