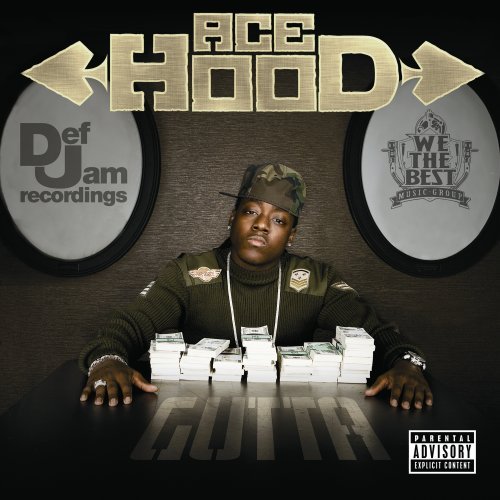 Even though DJ Khaled has help to progress the careers of some of today’s more popular music artists such as T-Pain, Akon, Rick Ross, & Plies, he never actually handpicked and groomed a rapper of his own. Enter: Ace Hood; the first rapper of Khaled’s Def Jam distributed label, We The Best. My thoughts about Ace Hood have been always confusing. I kinda thought he wasn’t worthy of being in XXL’s Class Of ’09/The 10 Freshmen (Even though he’s one of the few on the list to actually release an album). Then I was surprised at how he held his own in the best cypher at the BET’s 2008 Hip-Hop Awards (With Jadakiss, Fabolous, & Juelz Santana). Well, Ace Hood may put the doubters to rest with his debut album Gutta. Is Ace Hood ready to take his game to the next level?

1. I Don’t Give A Fuck
Produced by Kane Beatz
Production wise, Gutta starts off on the right foot. Kane Beatz gives a truck rattler as Ace rides the beat. Even though Ace Hood rhymes leave a lot to be desired in terms of originality, his actual flow and voice get the job done.

2. Can’t Stop
Featuring Akon; Produced by The Runners
“Konvict Muzik!” Why do people let Akon yell this on a song even when he doesn’t produced the beat? I can’t front though here; even though I’m tired of Akon, the best part of this song is the hook. The beat sounds like you standard fair when it comes to The Runners’ produced beats. Ace continues to talk about buying Louie bags and mall shopping sprees. I guess the recession is not effecting Ace Hood.

3. Get ‘Em Up
Produced by Drumma Boy
For the observant folks out there, you might remember the song being played at the end of Ace’s “Ride (remix)” music video. Even though the subject matter doesn’t vary much, Ace Hood is in his zone here over this Drumma Boy produced beat; “I say I maybe gave a damn, but I never gave a fuck. Rep your city like a G and put your middle finger up”. It works.

4. Gutta
Featuring Trick Daddy; Produced by Gold Ru$h
Did they just flip Vicki Sue Robinson’s “Turn The Beat Around”? Yes. I won’t lie, I was ready to hit the skip button at first. But on further listen I actually think it’s one of the better tracks on the album. It really reminds me of something Trick Daddy would have done himself earlier in his career. This is one to check out.

5. Guns High
Featuring Rock City; Produced by DJ Nasty
Even though the beat sounds like it was well produced by DJ Nasty, I’m hoping Ace changes subject matter from guns, money, and drugs…or at least brings something different to the topic. I don’t feel either way about this track. And is it R. City or Rock City?

6. Cash Flow
Featuring T-Pain & Rick Ross; Produced by The Runners
One reason I think this song didn’t catch on better than it did earlier this year was that it sounded like it was another DJ Khaled song instead of spotlighting Ace Hood. The beat on this one is hard though; I always thought that. Ross and Ace rap about, uh, what else: money. Love him or hate him, the one who steals the show here is T-Pain (And how long was that hook?).

7. Ride
Featuring Trey Songz; Produced by The Inkredibles
I can imagine the Def Jam executives talking about this track; Exec A: “Ace Hood’s album needs more buzz. Maybe we should suggest he diversify his subject matter?” Exec B: “Hell no! Your ass better call Trey Songz or Ray J and tell that nigga to make a song for the ladies. It’s a recession fool!” All jokes aside, Trey Songz does his thing on the hook. Even though there have been a million “down ass chick” songs made, I guess this one could have been worse.

8. Fed Bound
Produced StreetRunner
Okay; the production here is actually high quality (Especially the intro). It has a good cinematic feel to it. The only slight drawback beside lines like “I keep that lead to pencil sharpen your head”, the track sounds a little like an intro track. A notable selection.

9. Stressin’
Featuring Plies; Produced by J.U.S.T.I.C.E. League
Ace Hood does a useful job in detailing the stress in life (Bills, jail time, betrayal, child support, etc.). The production is provided by J.U.S.T.I.C.E. League which is a good thing since most of the time they do good work. I’m scratching my head over the Plies supplied hook. “Trying to help a nigga and he wes me…” What the hell does “wes” mean?

11. Can’t See Y’all
Featuring Brisco; Produced by Shawty Redd
Ace Hood keeps the “Gunshine State” theme going and hooks up with yet another Floridian. I give this one a pass because instead of doing the copy and paste thing, Brisco and Ace actually go back and forth and come out with a hood banger (The Shawty Redd beat adds to this). Is Brisco still on Cash Money?

12. Get ‘Em
Produced by The Inkredibles
I checked out the music video for this one and it’s pretty bland. But the actual song isn’t half bad and is saved by the electric gutair and my favorite part, the “Blocka, Blocka, Blocka, Blocka, boy there he go!” part.

13. Call Me
Featuring Lloyd; Produced by The Inkredibles
Yeah, Ace Hood has almost all the R&B singers who specialize in doing Rap hooks: Trey Songz, T-Pain, and now Lloyd. This might as well have been “Ride Pt. 2”. I know this will probably get radio play, but SKIP!

14. Ghetto
Featuring Dre; Produced by Cool & Dre
It seems like Cool & Dre production has took a down turn as of late; a year or so ago this track would have been better. At this point, it seems like Ace really doesn’t have anything else to talk about besides money and the streets. Maybe if I would have heard this sing earlier in the album, my thoughts would have been different. But after a whole album full of this kind of stuff….

15. Top Of The World
Damn, I guess they saved the best for last. This is by far the top track on Gutta. Ace Hood finally drops the posturing (Well, not really). The kids singing on the hook could actually make this a great single. The piano powered beat gives this song a retrospective feel and ends the album on a good note.

16. Ride (remix)
Featuring Trey Songz, Rick Ross, & Juelz Santana; Produced by The Inkredibles
I spoke about the video for this song a while ago. The track is more of a bonus than really a part of the album and hey, it’s actually better than the original.

Bottom Line:
Seeing that Ace Hood is looked at by some as one of leaders of the new school, you’d think he’d try to carve out a niche of his own. While he does show some talent, it seems like Ace never opens up and shows the world that he’s more than just materialism and  gangster pretentiousness. The album does have a note-worthy cast of producers and Ace does keep in Florida with the guests. I sure some may love Gutta but personally, I don’t think this album, or maybe Ace, would get much attention without the DJ Khaled co-sign.