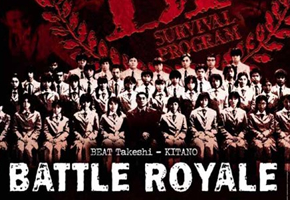 And once again nappyafro goes left. If your wondering: “Why would they put up an 8 year old subtitled Japanese movie full of violence?”; Uh, because that shit is awesome. The movie labeled “crude and tasteless” by members of Japanese parliament and other governmental officers is now on nappyafro.com. I saw this film on bootleg a few years ago and thought it was like a video game come to life. Here’s the plot:

Think about it: you got 42 high schoolers running around on a deserted island trying to kill each other…fuck Lost; THIS shit is gutta! For you film nerds out there you’ll also notice Chiaki Kuriyama is in this movie (Gogo Yubari from Kill Bill Vol. 1…which I also posted last week. See what I did there?). The movie itself has gained an almost cult following since it’s release and there was even talk of a American remake. If you’ve never seen this movie or just wanna watch it again, check it out. Oh yeah, there’s a sequel to this movie called Battle Royale II: Requiem. I started watching, it was bad and I stopped watching. Happy Friday Night ‘Fro. Enjoy.