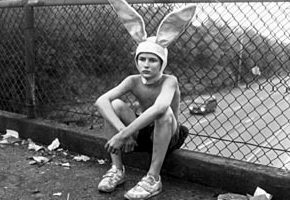 Okay Hip-Hop nerds: Does anybody know the name of the movie that was quickly featured in the film Belly? The one Nas & DMX watched after the opening bank robbery sequence? You know; 2 dirty white kids shooting toy guns at another kid in a bunny outfit? Well, if you DO know what I’m talking about; two points for you. I know I always wanted to know the name of that movie and now I do: Gummo (Released in 1997). What’s weird is that it’s directed by Harmony Korine who also wrote the screenplay for the movie 1995’s Kids (Which I thought was raw as hell). While Kids was an eye opening look in the the sex and drug filled world of America’s youth, Gummo is just…disturbing. This movie really has no plot and shows a lot of images sometimes too painful to watch (One of the first scenes is a cat getting drowned). I would be lying if I said I didn’t feel a little sick after watching Gummo, but I will say that it’s an experience. Tell me what you think… Oh and if you got any movie recommendations for a future Friday Night ‘Fro‘s hit us up on the forums and let us know. Peace.