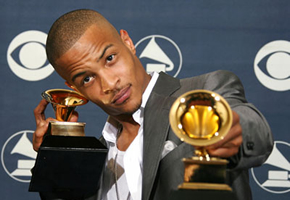 Well, it looks like the Grammy Award nominations have come in, and it’s mostly what I expected: Weezy killed the shows nominations (8 by the way) and was the only rapper who got the Album of the Year nomination. That’s incredible. At this rate, Weezy will be last year’s Kanye at the awards. Ne-Yo getting an Album of the Year nomination was a good look too. It’s hard to imagine that 3 years ago no one knew who this guy was. However, both of them have tough competition. Actually, I take that back: Weezy has tough competition. Ne-Yo should clean up in the R&B category (If “Miss Independent” doesn’t win one award, I’ll be pissed).

After looking at the nominees, I feel like I know who will win, but even more so, I have my own opinion on who SHOULD win. And the Nominees are…

*And the Winner is…
Lil’ Wayne – “A Milli”: I think we knew this was coming; this song was all over the radio; it was ridiculous. The only song up there that got more airplay was “Sexual Eruption”, but I doubt people even remember that song anymore (I didn’t until I saw it was nominated). The first Lil’ Wayne victory of the night.

*Who will get robbed…
Nas – “N.I.G.G.E.R. (The Slave and the Master)”: It was in between “Roc Boys” and this for me, but Nas edges out Jay on this one because of the quality of the song that he put together. However, it won’t win mainly because it got no airplay. I can’t wait to hear the presenters say the title, that’ll provide some primetime entertainment.

*And the Winner Is…
Jay-Z & T.I. featuring Kanye West & Lil’’ Wayne  – “Swagga Like Us”: Based on both airplay and the popularity of the sample. I’m actually not sure about this one; I’m fairly sure Weezy will take this one too, whether it’s “S.L.U.” or “Mr. Carter”. Second award of the night for Weezy.

*Who will get robbed…
Big Boi featuring André 3000 & Raekwon  – “Royal Flush”: Being a legend in the game just doesn’t mean much anymore, does it? I mean, check out the features on this! Not to mention that this definitely a great song. Oh well, better luck next time.

*Who will get robbed…
John Legend featuring Andre 3000 “Green Light”: I’m not saying Lupe doesn’t deserve to win the award, but “Green Light”’s funky tune and John Legend’s crooning over the track is simply infectious. This is definitely one of my most favorite tracks of the year.

*And The Winner Is…
Lil’ Wayne – “Lollipop”: It pains me to even write this, but yes, Weezy will win this award, this was undoubtedly the song of the summer, with “Whatever You Like” a close second. Weezy’s third award of the night.

*Who will get robbed…
Lupe Fiasco featuring Matthew Santos – “Superstar”: Looking at the nominees, this category is just plain sad. Lupe’s excellent collabo with Matthew Santos easily outshines everything else on the list.

*And The Winner Is…
Lil’ Wayne – Tha Carter III: We all expected this one. When you get nominated for the Album of the Year of the award and your the only person to nominated in your genre, your guaranteed this award. Straight up, I don’t agree with this at all, but at least it will quiet the Lil’ Wayne stans out there. Weezy’s fourth award of the night.

*Who will get robbed…
Nas – Untitled: Nas outshines everyone on this list. Jay-Z would’ve won this last year against Graduation, but I guess that’s the penalty of releasing your album in Q4. Same thing goes for Lupe, and T.I.’s album just doesn’t stack up the other stars on the list. Nas’ Untitled is probably the most intelligent release of the year and should win this award.

Bottom Line:
This will be a “Lil’ Wayne Grammy Awards” show in every aspect. He’ll win at least four awards when February rolls around. I knew this was coming. No matter how you shake it, 2008 was Lil’ Wayne’s year, hands down, whether you think he had the best album or not. While I’m not going to get pissed off that Nas, an undeniable legend in the game who hasn’t won one Grammy in his 14 year career will get snubbed by Weezy (OK, maybe a little…), I will say this: if Weezy wins the Album of the Year award over heavyweight contenders like Ne-Yo and, my favorite to win, Coldplay (Who will also clean up), he can lay claim to being the Best Rapper Alive, but I’ll have lost all respect for the Grammys.