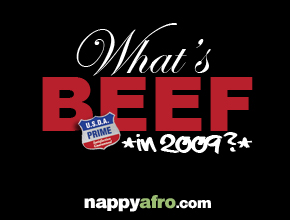 The late great Christopher Wallace may have asked (and answered) the question “What’s Beef?” over a decade ago, but in 2009 Rap Beefs seems to be still prevalent in Hip-Hop. We are still in the second month of this year and already the diss songs are all over the place. Now, most of these beef have common threads: Most of the time at least one of the participants have an album coming out, at one point someone’s sexuality will be questioned, & in this new age, more than actual music will used in the battle. Where years ago you would have to wait months for a response track, in this “internet age” you get a response to a response track four days after the original. Here are the noteworthy three Rap Beefs of the year…so far…

Soulja Boy Tell ‘Em vs. Bow Wow
Diss Songs: 2 (Soulja Boy Tell ‘Em – “Fuck Bow Wow” & Bow Wow – “What I Think About You”)
Album Coming Out Soon?: Bow Wow – New Jack City Part 2 (March 31st 2009)
Grade of Beef: Standard 2.0
Summary: I don’t really think anyone expected to hear another “Takeover” out of this battle. Especially when the whole thing started based on whose Lamborghini was the nicest (Really?). In an originally friendly competition about cars, Bow Wow apparently went too far by referencing Soulja Boy’s recent robbery.
Result: Squashed…over the phone that was that was then put up on YouTube (Very new school).

Joe Budden vs. Saigon
Diss Songs: 4 (Joe Budden – “Letter To Saigon”, Saigon – “Under Achiever”, Joe Budden – “Pain In His Life”, & Saigon – “Pushin’ Buddens”)
Album Coming Out Soon?: Joe Budden – Padded Room (February 24st 2009)
Grade of Beef: Choice
Summary: Lyrically, this one is way ahead of any other battle on this list. It started out with Saigon taking a Budden line from a freestyle to heart and went from there. Like most beef these days, dissing the family and relatives were fair game (I understand the girlfriends/wives; but the kids?). Both these rappers were quick to throw lyrical blows; I remember writing an article about the beef and by the time I was finished another song had came out.
Result: Squashed…maybe. Just Blaze jumped in and got the Budden and Saigon to make peace over the phone. Both say the other begged the other to stop; somebody lying.

50 Cent vs. Rick Ross
Diss Songs: 6 and counting… (Rick Ross – “Mafia Music”, 50 Cent – “Try Me”, Rick Ross – “Kiss My Pinky Ring, Curly”, 50 Cent feat. Lloyd Banks & Tony Yayo – “I’ll Be The Shooter (Officer Ricky’s Done)”, Rick Ross – “Push’Em Over The Ledge”, 50 Cent – “Tia Told Me”)
Album Coming Out Soon?: 50 Cent – Before I Self Destruct (March 24, 2009); Rick Ross – Deeper Than Rap (March 24, 2009)
Grade of Beef: Prime
Summary: I though I’d never say this: 50 Cent didn’t start this feud. But damn if he isn’t trying his hardest to end Rick’s career. While there have been a lotta diss songs released (I only included the one actually by 50 or Ross), that’s definitely isn’t the only thing used in this battle. There’s been websites: thisiscurly.com, officerricky.com, as well as 50 Cent ‘s official site thisis50.com. A lotta sound bites and numerous videos; Ross really hasn’t done much in this area but 50 playing his alias “Pimpin’ Curly” has a series of clips as well as getting Rick Ross’s baby’s mama to talk slick about Ricky. And yes, they even brought out the flash cartoons: Ross’s “Gay Unit Workout” and 50’s “Officer Ricky Cartoons” (Another series). Oh yea, this started out by Rick calling 50 Cent’s treatment of 50’s kid’s mother (You almost forget sometimes…)
Results: This one ain’t over by far