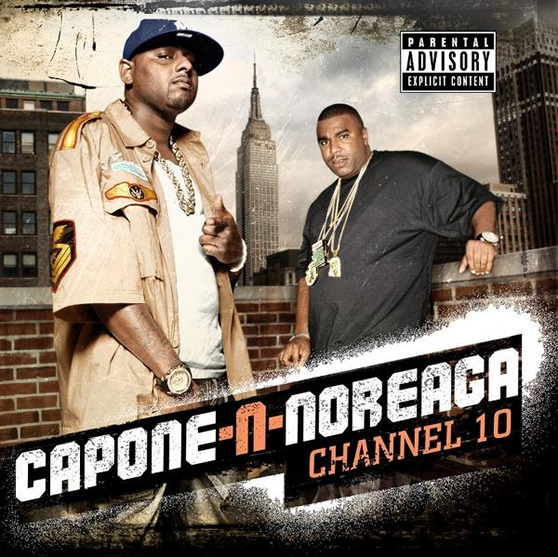 It’s been 12 years since Capone-N-Noreaga dropped their debut The War Report, an album that was applauded for it’s rhymes that gave a look into the gritty tales of the hood. Their sophomore album, The Reunion, also captured a second Gold plaque and showed that the duo could still make good music that appealed to fans. A lot has happened during C-N-N’s 13 years in the game; Unsigned Hype features, Middle Eastern hood lingo, inner group turmoil, a N.O.R.E. solo career, jail stints, and now the release of their 3rd album, Channel 10.

1. Intro
The intro to the album has various clips from the duo’s previous albums. I always wondered how they cleared the James Earl Jones “This is CNN” sample. Maybe they didn’t.

2. United We Stand
Produced by SPK
As soon as I hear the mediocre chorus on this track, I know that it’ll be hard for me to get past it. The beat is a little redundant but not terrible. The song’s subject matter is about the group’s unity but with lyrical references of the Mark Walberg movie Shooter and New Edition member Ronnie DeVoe, the whole song sounds dated.

3. Rotate
Featuring Ron Brownz & Busta Rhymes; Produced by Ron Brownz
I go back and forth with this song. I’m trying to figure out if this song didn’t have Ron Brownz on it, would I still not like it (Is anybody else tired of Ron Brownz?). It’s just something about this song that just sounds lazy. I guess the beat does it’s thing because it has Noreaga in his element. In fact, this was originally N.O.R.E.’s song (“The Superthug is back!”). I first saw this track with just Busta & Noreaga.

4. Talk To Me Big Time
Produced by The Inkredibles
This track shows that C-N-N still has good chemistry as they go back and forth. But what’s up with the hook? The production reminds me of something that would appear on one of their previous albums.

5. Bring It Here
Produced by Kyne Beats
Capone and N.O.R.E. rhyme about a popular subject in rap music: beef (“Last time it’s beef I had to bring it to your door/This time it’s over nigga brains on the floor”). This song is really similar to the last one, but it’s actually better. The beat fits the mood of the song but it would be better sequencing if it was further apart from the previous track.

6. Grand Royal
Produced by DJ Premier
Who doesn’t like a Premier beat? This is the second combination of these two parties (The first being “Invincible” off The Reunion). Most of the time you know what you’re going to get with a DJ Premier production and it he delivers here. This is good New York Hip-Hop.

7. The Argument
Produced by Hazardis Soundz
Here C-N-N rhyme about the ups and down of their relationship. It’s put together well and they get their point across; (N.O.R.E.) “My first solo album, I set it up for our future/You was locked up but still executive producer” (Capone) “It was suppose to be the same on my first album but the lines got switched, nigga we was wildin’”.

8. Mirror
Produced by Hazardis Soundz
Over a piano heavy production, C-N-N rhymes about the tribulations of their past and present; “You see my life is full of good and disaster, looking at mirror and the mirror broke after.” Nothing really groundbreaking here, but the beat really helps here.

9. Wobble
Featuring Mobb Deep; Produced by Havoc
“Shorty see you wobble wobble, and see you shake it shake it.” Really? This is sad because without the terrible hook, this song might be good. The beat combined with N.O.R.E.’s funny rhymes about a girl’s “pussy tighter than Kanye’s shirt” had potential.

10. Channel 10
Produced by SPK
The album’s title track (It also shares the name of a track off The War Report), has C-N-N explaining that they still holding it down. Noreaga says in the beginning that somebody wanted to put a girl on the chorus singing instead of him. So far this is probably the best track at showcasing the chemistry between the two.

11. Beef
Produced by StreetRunner
Didn’t they cover this topic on “Bring It Here”? I guess not. They didn’t add nothing to the whole the subject matter and it’s kinda cliché. Album filler.

12. My Life
Produced by Hazardis Soundz
Here both rap about how they live they life the way they want to live it (Well, Capone goes off subject but hey…). This is back dropped by a piano loop. Once again, nothing really you haven’t heard before.

13. Stick Up
Produced by The Alienz
As you would expect from the title, C-N-N rhyme about a robbery. The track tries to be conceptual, but at the end you realize that they really never deliver. The production is monotonous and doesn’t assist at all.

14. My Hood
Featuring Clipse, Tha Dogg Pound, Maino, & Uncle Murda; Produced by SPK
As you would expect this song clocks in over 6 minutes as all the participants represents hoods from Queens, Long Beach, Brooklyn, & Virginia. The production sounds like something the Neptunes would have made in 1998. The song isn’t as good as it looks on paper but old head hearts will warm when they think about Dogg Pound and C-N-N being on the same track.

15. Follow The Dollar
Produced by The Alchemist
Alchemist has produced some bangers. But this one? Naw. Straight brick. I actually like the concept about following where a dollar dropped on the ground comes from. But not with that beat.

16. You See Me!!!!
Produced by SPK
I don’t know if they where to start a trend but the hook is awkward and doesn’t go with the provided beat. They way they say “You see me!” sounds like Ms. Peachz on “Fry That Chicken”.

17. Addicted
Produced by Hazardis Soundz
It seems as if C-N-N limped across the finish line with this one. The song here is about addiction (Which is a good subject because we all have them), but the beat sounds like it someone’s first beat. Now that I think about it, Noreaga said something to that nature in the beginning of the track.

Bottom Line:
It’s good to see groups from the late 90’s still being able to make music, but I think one problem with Capone-N-Noreaga is that it’s really not an equal match. When Capone went to jail, N.O.R.E. really broke out as a solo artist. When C-N-N got back together, he really overshadowed his partner. This is still the problem here twelve plus years later (Noreaga still does all the hooks and most of the time steals the show). This isn’t the only problem with the album. Maybe they should have trimmed the album down a bit because it can get redundant. All in all, loyal fans viewers of C-N-N will probably still like this album and stay turned in. Other will probably be quick to change the channel.

nappyPicks: No tracks will be kept on my iPod.