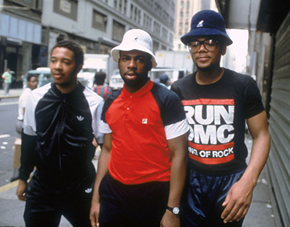 In a time when folks are debating if Weezy is the best rapper alive and people are selling 3 million ringtones but only 20 albums, I think it’s important that we recognize the one’s that personified what it meant to be Emcees.

Run DMC (R.I.P. Jam-Master J) were one of the pioneers of rap. They used to PERFORM as Emcees. This wasn’t 3 dudes on stage holdin’ their crotch while 9 other dudes rapped along with the record that played in the back. The presence of being an Emcee….or MC as Rakim said “Move the Crowd”…was something they took pride in. Even to this date, with Rev. Run doing shows last year, he was still true to what he was doing, being an Emcee. I don’t know that we will ever get another group like Run DMC, and I am glad that the Rock and Roll Hall of Fame realizes and acknowledges the greatness of this legendary group. They will be inducted into the Rock and Roll Hall of Fame on April 4th, 2009, the second hip-hop group to be inducted (Grandmaster Flash and the Furious Five).