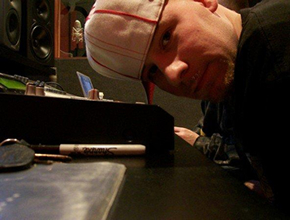 I recently caught up with Justus League member Joe Scudda and chopped it up about where he was from, the Georgia Bulldogs, and of course his music. I decided to turn the tables a bit instead of asking run of the mill questions, we wanted YOU the reader to get to know JOE SCUDDA the person. Sit back and check out the interview.

I grew up in NC..Greensboro (Big Shouts) to be exact. Tell everyone how long you been in the game?
I cashed my first rap check in 04 i think it was for my verse on the Foreign Exchange album…”Raw Life” was the song so lets say since then. I had only been rapping a couple years before that because I started out as a DJ.

What are some of the places you have been able to see courtesy of Hip-Hop?
It’s takin’ me a lot of places people from where I’m from have never seen unless they went into the military. I’ve been all around the U.S. many times over, been overseas to Europe, got to do a little acting gig on FX’s The Shield and got to meet people that I grew up listening to and being a fan of and got to work with some of those people I respect so its been pretty good to me so far….and its only looking up. I cant settle for the little I have had…that’s just a taste of whats to come.

I hear that. Getting some of that acting money. What are you working on right now?
Right now im 100% focused on finishing my solo album up. This is a album that should have been done and out years ago!! Due to me having a lack of focus at times…going through ups and downs its taking longer than I would have thought! I’m my own worst enemy at times…but I had to hit that bottom to get back up and go harder than before! That’s the reason I titled the album “FASHIONABLY LATE”….it fits like a glove! hahaa

Being in the Justus League has to have its privileges. Has aligning yourself with some of the best lyricists in the game helped you out?
Of course it has! When you hang around broke people…your gonna be broke. When you play sports against average talent…you can only get but so good! Same as rapping…if you rapping with some of the best then it makes you better and makes you step your game up so much. A bar has been set so you have to stay on point to stay above the bar! I think Phonte and Pooh are two of the dopest cats I have ever been around…so running with them and watching how they do things only has helped me.

Outside of the crew who would be your dream collabo?
That list is so long I could be here all day!!! If you would have asked that back in the day when I was in high school then 1 of those collabs came true because I have recorded with a lot of people from the Boot Camp!! Buckshot, Sean Price, Steele….I grew up a hugh fan of those guys!! So getting to record songs with them and just kick it was a real pleasure for me. But as far as right now….Ice Cube or Scarface!

Let’s get a little personal, tell the people something about Scudda they do not know.
Well some people might know and some people might not …but I’m a borderline PSYCHO Georgia Bulldog fan!!! Its almost sad..hahah. I moved to NC from GA in junior high so my GA roots are still strong. I rep for NC but some things never left me. I go to bout 4 or 5 games a year…this past year was the first bowl game I’ve missed in about 5 years. I know EVERYTHING…the number, the name, what year they are, what position they play…what incoming freshman we got….what they play …what kids we are going after……EVERYTHING. Yeah Imma chill cause I was really about to go in….hahahahhah

Hold up, you are a Georgia Bulldog? Aw Hell! GO GATORS. Let me ask you a redundant question: who are some of the people that inspired you to become an emcee?
Boot Camp, Outkast, Scarface, Ice Cube, Snoop, Jay, Big….everybody! I always liked it all. It kinda sucks now because I rap so I look at music with more of a different eye than I did before…because I do rap so I think I’m more critical than I used to be. And really….that’s wack! I had to get out of that….start taking music for what it is and what its meant for. I think that’s a lot of peoples problems nowadays. Nobody is just a fan anymore…they either rap or produce or they are arm chair critics. I’m not saying you got to like everything under the sun but I wasn’t as hard on rappers and music back then as I am now. But the radio was a little different then too so who the hell knows..hahahaah

What is Scudda’s favorite album of all time?
No clue…way to many! Ice Cube’s first 2 albums. Big- Ready To Die. Jay-Z- Reasonable Doubt. EVERY Outkast Album!!!!!!! Ghostface- Supreme Clientel. ALL Boot Camps FIRST albums. Mobb Deep-The Infamous My favorite Little Brother album is GET BACK!! I swear if that was the album that came out on Atlantic they would been OUTA HERE!! So many I cant write it all…….my first album of I ever paid money for was Bobby Brown Don’t Be Cruel album HAHAHAHAH

Inside information: What is Scudda’s favorite place to eat?
BOJANGLES!!!!!! Chicken Biscuit Combo with a tomato…fries, sweet tea! Packet of Hot Sauce and honey mustard for the biscuit and the fries!!!!!!! Think I might go get one when Im done here!!! OH….my new shit is this place here called DICKEY’S. It’s a BBQ spot but they make Georgia style BBQ instead of NC style BBQ. NC puts vinegar in their BBQ sauce…and Georgia is more of a ketchup based!!!! I live in NC so my people from NC don’t get offended…hahaha…but NC BBQ cant fuck with GA BBQ!!!!!!!!!!! Wow didn’t know I was gonna get into that…lol

There you have it…Joe Scudda loves Bojangles chicken! Okay, Scudda’s in the club, what is he drinking?
EVERYTHING PUT IN FRONT OF ME!!!!!!!!!!!! I GO IN! But if I got to narrow it down my drinks of choice are Jack & Coke….and for the beer its Pabst Blue Ribbon or better known as PBR. I’ll drink pretty much anything with alcohol in it as long as it aint sweet. Look fellas….if your drink matches your girls dress or her purse….PUT THAT SHIT DOWN!!! You cant hang with Joe Scudda if you go to the bar and order a sex on the beach or a blue motorcycle!!!!!! I dont give a damn how good you say that shit taste….MAN UP!

Scudda is shooting a video and needs a model…who are you picking?
Used to be Lauren London but I think she got knocked up didn’t she???? Probably go with either Scarlett Johansson or Rosario Dawson…..I’m not picky though…if she fine…RUN IT!

Interesting picks. Tell the people why they should mess with Joe Scudda.
Because…..I’m that guy you could be kicking it in the bar with. I’M YOU!….I go through shit just like you…I party like you…I make mistakes like you…I pay bills like you…I miss bills like you! I think everybody is gonna be able to find something on my album that in some shape or way they can relate too!!!

This is one for the ladies out there. If you are taking a girl out where would you take her…Ruth Chris or Wendy’s?
MAAAAN NEITHER!!!!!! Damn….I’m not a cheap bastard but please….RUTH CHRIS??? You got to be wifey status to get that hahhaha. Let’s do the middle of the road on that one. Take her to a nice spot…not a chain restaurant but I nice spot downtown or something. Dim lights….little wine…little candle lit action…nice jazz music in the back! That’s if she the type of chick that deserves that……..if not….its WAFFLE HOUSE TIME!!! hahahaahahha wait….this interview took a left turn somewhere..hahahaha

Last question, what is your favorite website? (Hint)
Ummmmm NAPPYAFRO.COM

Good looking out Joe! Do you have anything else to say?
Thanks for the support and FASHIONABLY LATE COMING 09!!!!! Take it to the bank!