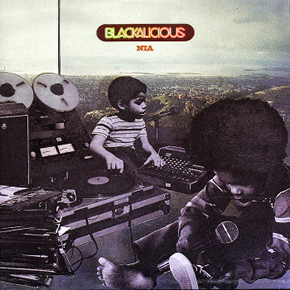 Nia. It’s been you the whole time. Nia is the girl in high school who was the complete package, but got overlooked by the head cheerleader. Nia is the advice you didn’t take; later appreciated when it’s too late to apply it.

In the year that gave us The Slim Shady LP, The Chronic 2001, and Vol. 3: The Life and Times of S. Carter; rap looked to be as mean-spirited and excessive as ever….

Nia cried out for more, begged for more, and not enough people listened. What a message you missed.

Gift of Gab and Chief Xcel combine their lyrical and production powers, respectively; to form quite possibly one of the most overlooked duos’ in the rap game. Compared by some as a California Outkast, due to their raw yet thought provoking style, they’ve been at it since 1992. The sheer creativity and style they bring to each track they craft is obvious. It sounds like Hip-Hop from true lovers of the art. From the album cover to the final track of their debut album, Nia is a hand-written love letter to what Hip-Hop is and has the potential to be.

Blackalicious brings it on every end of the spectrum across 19 tracks. You’ve got lyrical whirlwinds like ”Smithzonian Institute of Rhyme” and the creative “A To G”, where Gift of Gab drops verses where most, if not all, of the words start with a specified letter of the alphabet like so….

“We’re going to learn to hear words with vowel “A” sound….Listen with care

(Gift of Gab)
I be the analog arsonist, aimin at your arteries/
All-seeing abstract, analyze everything/
Adding on, absolutely abolishing/
Average amateur’s arsenal just astonishing/”

And it only gets better as he dissects the alphabet’s starting lineup. I can’t recall how many times I’ve cruised aimlessly to mellow tracks like “If I May”, “Deception”, and “Shallow Days”; the beats an easy going meld of drums and real instruments, but assaulting you with questions that may make you rethink your responsibility to Hip-Hop as a fan or otherwise such as these bars from “Shallow Days”…

“Time and time, a brother asks why
The rhyme is not laced with a gangsta touch
I said “Simply because I don’t live that way
Still kickin’ them rhymes rugged and rough”

“But that won’t sell,
cause you gotta keep it real
so that we can feel
where you’re coming from
Because these streets is ill so if you ain’t
killing niggas in rhymes
your whole sound’s just bubble gum”

Even the drum and synth heavy, Golden Child-inspired fantasy romp “Hanger, Cliff” is a symbol of beautiful production, haunting storytelling, and crossing the “safe” zone of rap into Love Below territories of strange. As cold of a wordsmith as Gift of Gab is, Chief Xcel takes the sounds that back him to levels I’m still wanting to see out of modern producers. Fresh samples, REAL instruments that add to drum patterns, and keeping the flow steady for the adventure that is Nia.

How often can you listen to an album and be left in shock over what you just heard, just to be turned on your ear once again? Blackalicious achieves diversity through this CD without the need for features or a laundry list of producers; they just know how to keep you guessing and waiting to see what they do next. 99’ seemed so deadest on reinventing the sex, drugs, and violence wheel that the West Coast left behind; which left the rap world missing out on two cats advancing the game by just putting out exceptionally crafted Hip-Hop.

Wow, what a concept. Seems like the only Nia people were checking for though was Long, and I couldn’t blame ‘em for that. What you get with Nia is 74 minutes of what rap was, is, and could be if we saw more artists taking the risks this duo started with this album and continue to do this day. Isn’t Hip-Hop supposed to be about progression anyway? Or did we just get comfortable in the formula?

Whatever the answer may be, 10 years removed from being overlooked, this album still remains ahead of its time. Any album with that kind of staying power, which can STILL be learned from, deserves a nod as classic material.