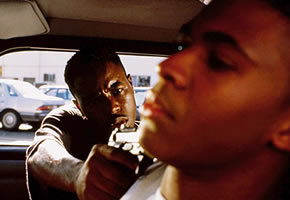 Yeah, it’s about time we put this up here. It’s Friday, and I have to take some SAT Subject Tests tomorrow, so I’m not gonna do a lot of talking here. When I first saw this movie at age 14, it was without a doubt the hardest movie I had ever seen. From the drop, within the first 20 minutes, the two main characters stick-up, rob, and kill two Asian shop owners, only going in there to pick up some beer. That’s basically how the entire movie goes: Caine, the movie’s main character, is a dealer just trying to survive in the hood, while his best friend O-Dog, is just living his life, not giving a fuck about anything, and getting Caine into trouble most of the time.

Everything about this movie makes it a hood classic: O-Dog is still one of the baddest brothers ever to grace the movie screen; The classic stick-up scene from the beginning of the movie, and who could ever forget the ending?? It was one of those endings that didn’t settle well, but at the same time you could never forget about it. Caine’s story as a youth just trying to make it is both crazy and it also makes you think about influences and how young children pick up how to survive in the hood at a young age, and later, without realizing it, pass those lessons on to even younger kids.

In short, this whole movie is insane. I could go on and on, but like I said, it’s Friday. Enjoy: May looks like it’s gonna be a hot month for music, and we’ll be back with the new shit. Enjoy.