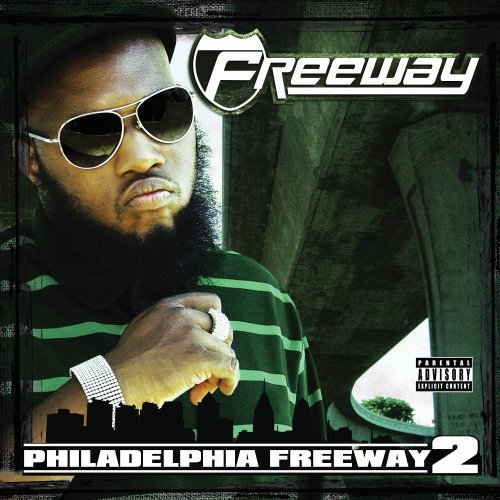 When I first heard about this album, it seemed almost too good to be true: Freeway was not only making another album, but it would be the sequel to his debut album, Philadelphia Freeway, a solid album that, to this day, remains a hood classic. Freeway burst on the scene with hard lyrics and popular singles like “What We Do” & “Flipside”. He caught the sophomore jinx though, and his last album, Free at Last, tanked with only 100k sold to this date. Now with an album on Real Talk Records, can Freeway get back in the game in a major way?

Pay Attention
Freeway just comes back, talking about the album. It’s basically the introduction into the next track.

Finally Free
Now this is the shit I love to hear! Freeway came with this one: the first single off the album, and for good reason. The track bangs, and the hook is hot too: “Finally Free, Free back finally!” I’m glad he’s back too. This is a great way to start the album, it makes up realize that we’re happy Freeway is back on his grind. “Be in it for the whole duration/Fuck waitin’, get dough!”

Gotz To Be Tha Bomb
This is song for me was just OK. I mean, he’s got more Osama references than you count (you know, the whole Bomb thing…), but the hook is kind of lazy and drags on. Lyrically, Freeway shows us more of the skill and ability that he’s been known for, talking about days in the past, but I feel like he could be a lot better at times, like here: “I used to keep the lazer on my hip/Same days when I used to keep the pager on my hip/That was back when you could sell a million on the strip/And next…but now shit all fucked up.” Average song at best.

Hands Up
The beat on this BLAZING! I have no idea who produced it, but it’s amazing, sounding like the East and the South merged together into greatness. It’s got an epic feel to it; strong enough to be a banger, but at the same time good enough that Freeway can take out his lyrical skill. And Freeway rides it like a vet, constantly switching flows on it:

Freeway really did his thing here, you gotta check for this one.

Think About It
This a quick skit from a movie clip about how the drug game has changed things in the ‘hood.

Crack Rap
The production here was amazing!! I was going crazy as soon as this song came on, easily my favorite track out of them all. Freeway is rapping some real shit on this album too: “Half you niggas ain’t even been a gun battle/Ya’ll niggas just lyin’ rappin’, high as a scaffold/But if a nigga start to clap at you, you won’t know what to do/Crying to your mother, standin’ frozen like a statue.” Free definitely stepped it up for this one, and all 5 minutes of this song is fire.

Murda Muzik
This song was aiight. The beat goes hard, but it doesn’t stand up to the production that came before it. Freeway sounds almost uninspired right here, and the hook is suspect: it’s too long and awkward to make this song a banger. I’m not skipping this one, but it is a disappointment.

Around the World
This one shoulda been the first single: the production on it sounds really clean, and the beat is hard enough to pass as street and yet at the same time club-ready, which is what makes it so genius. Freeway here raps about traveling: “I’m bi-coastal, the black hopeful/The Obama of rap, with a gat, holla!” That’s a cold line right there, but Freeway again isn’t as lyrical as he was in the early parts of the album. Still, a great song.

Streets Won’t Miss ‘Em
I’m really loving the production on this album a lot. When the pianos on this song come it, it just becomes too hot. Only problem is that even on song #9, these songs are starting to sound very similar, and it’s hard to tell them apart. This one is only 3:10, so it’s short and it doesn’t do a very good job of standing out from the aforementioned tracks on the album. Average song.

The Nation
This is a clip from Menace II Society, the scene with Caine and Sharif’s teacher talking about Sharif’s conversion to Islam and how it made him a better person. You know I gave ya’ll this as a Friday Night Fro’, so if you still haven’t seen the movie, go check it out.

It’s A Good Day
This song is alright, but it’s nothing you haven’t heard before. I mean, this is a commonly tread topic in rap. Freeway even calls this his version of “It Was A Good Day”. He talks about a good breakfast, fly clothes, and hooking up with a girl, so basically exactly the same as the original version, only not as good. The lyrics sound like Freeway was sleeping on this track, just going through the motions. Average track.

Keep Yo Hands Up
Featuring Sheek Louch
This is essentially a remix of the original track, but Sheek Louch comes on as a guest feature. Truth be told, his verse is aiight, I think this version should have been put on in place of the other one, instead of putting both versions on the same album. It makes the first version seem mainly like filler.

Philly Freezer
Freeway just comes on, telling us that more new music is on the way soon, and he also gives a shout out to Roc-A-Fella Records and State Property. Didn’t he get dropped?

Bottom Line:
This album is too short. I don’t know why, but Freeway’s albums are always really short and leave you wanting more. This album did leave me wanting more, but it doesn’t even feel like a real album, more like a mixtape that was pieced together and rushed to the shelves. It’s 10 tracks and 3 skit like tracks. Hell, you could even say it’s actually only 9 tracks because “Hands Up” is essentially on here twice. Another thing that disappointed me was that while the tracks on here were good, I think the tracks I heard before from Freeway’s “Month of Madness” were easily much better than this, and it seems disappointing that he would even call this the sequel to his excellent debut. If it seems like I’m bashing the album right now, I’m not, I just think the album could have been a lot better if he spent more time perfecting it. Still, this is a solid effort from Philadelphia Freeway.