Song of the Week: CunninLynguists – “Never Come Down (The Brownie Song)” 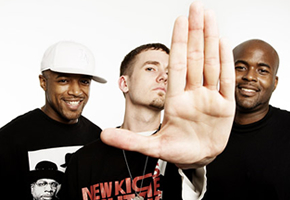 I have to admit to sleeping on the southern trio CunninLynguists. I have known about them and even checked for them a time or two when they were featured on bigger projects. When the big homie Saule did a review for their last LP Dirty Acres, I started checking for the group once I found out they were from the south. Little info about the group in case you didn’t know; the group consists of members Deacon the Villain, Natti, and Kno. Natti and Deacon the Villain are from Kentucky, while Kno is from Georgia. They released their first album in 2001 titled Will Rap for Food (which only featured Kno and Deacon). Enough on the intros, let us get to the meat! We recieved this song the other day and on first listen I was HOOKED! This one goes out to the ones that like to partake in the likes of Jack Herrer, AK-47, OG Kush,…well you get my drift. This is off their upcoming mixtape titled Strange Journey Volume One..which you will find here on nappyafro. So if you haven’t checked out CunninLynguists before, take this time to CHECK THEM OUT NOW! As always, enjoy this installment of Song of the Week!