Turn Yo’ Headphones Up: Unladylike – Certified 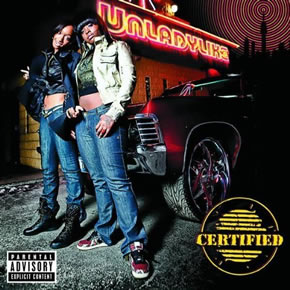 This weeks topic is dear to my heart. You’ve heard me talk about the importance and absence of women in Hip-Hop and my beloved hometown of St. Louis…I get both of them this week. Unladylike dropped their debut CD Certified this last week, shout out to under promotion! Def Jam, do better. They still seem to be doing better than you’d expect with no exposure outside of the 314/618 area code. I think that has a lot to do with loyalty of the Midwest, loyalty to artists, and them being female in a game that is sorely lacking in that area.

Enough about that, how’s the CD. In a word, NICE. The beats are largely “swag” music (think Dro) meets Three 6 Mafia. I don’t know that there is a song on this 12 track album that wouldn’t do well in the club. I bet Club Casino is going crazy to this joint, as evidenced by the lead single “Bartender”.

Lyrically, Gunna and Tee bring a few different flows to the table. They flawlessly go from a harmonies sing song flow to a slower paced southern feel and then kill the track with a more frenetic rapid fire delivery. You get the STL accent with some “hurr” and “thur” scattered over the album, but it definitely doesn’t crowd the album or become a gimmick. The topics range from the baller-riffic, drinking, and partying to love, relationships, and the global community.

In a market where the majority of CD’s are not only made by men, but are full of sex and songs overtly advertising trickin’ (if you got it or not, it’s still trickin’) and violence, this is a CD about having a good time, the club, and having a good time in the club.. They have the braggadocious “Sit Down”, one of my favorite tracks, where they chant “Why you bitches keep jumpin (sit down) 3x / So sit’cho ass down (3x)” where they openly challenge any chick to step to them, but even that has the chant and hand clap (and Lil’ John sample) to make sure that everyone will be having a good time talkin’ shit. They also have songs like “Like You” (another sure fire hit) which is that song about the mack and approach and “Old You” where they openly talk about lost love due to folks changing and letting go of the history tied to someone that you really don’t know like you thought you did, or once did.

If you are looking to find a fun album, some serious breakneck thump, and something that makes you roll down the windows and break the volume knob, this is the CD. Fellas, you may want to skip “Papi Over There”, unless that’s how you roll. If you are like more and more people in today’s economy and rolling with the public transportation, make sure you check out Unladylike and be sure to Turn Yo’ Headphones Up. (Amazon.com has the low low on this one, $7.99 for a digital!!!! Get involved!)