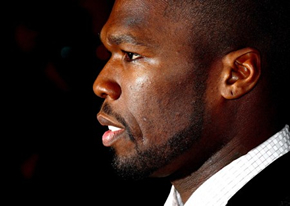 It’s that time again. More music is coming out and once again it’s up to your old friend B-Easy to round ’em up. And thankfully this time it does not include Lil’ Wayne or Gucci Mane (Hey, just to change things up a bit). In this edition we have 50 Cent getting Norman Bates-like with Marshall, DJ Khaled calls some friends and gets fed up, and we get one foot out with Mike Posner. (*clicking through iPod and setting it to Hustle) Let’s get it.

Download: 50 Cent feat. Eminem – “Psycho”
Produced by Dr. Dre
Well, looks like Curtis’ Before I Self Destruct has sprung a leak almost a month before it’s scheduled release. And of course the first song I pick is the one that features Eminem with Dr. Dre on the boards.

Download: DJ Khaled feat. Usher, Young Jeezy, Rick Ross, & Drake – “Fed Up”
Produced by The Runners
By now you should know what a DJ Khaled posse cuts sounds like: Runners on the beat; Akon Usher, Weezy Drake, Ricky Ross, & Jeezy on the track. Hey, if it ain’t broke don’t fix it. Khaled’s Victory drops in 2010.

Download: Mike Posner feat. Big Sean & Freddie Gibbs – “Bring Me Down”
Produced by Block Beattaz
I just recently go into Mike Posner and what a good time since his second mixtape One Foot Out The Door just got released. Why did I picked this track? I fucks with Gibbs and Big Sean (Uh, you know what I mean). I ‘ll tell you what I think of Mike “Senior at Duke University” Posner another time.