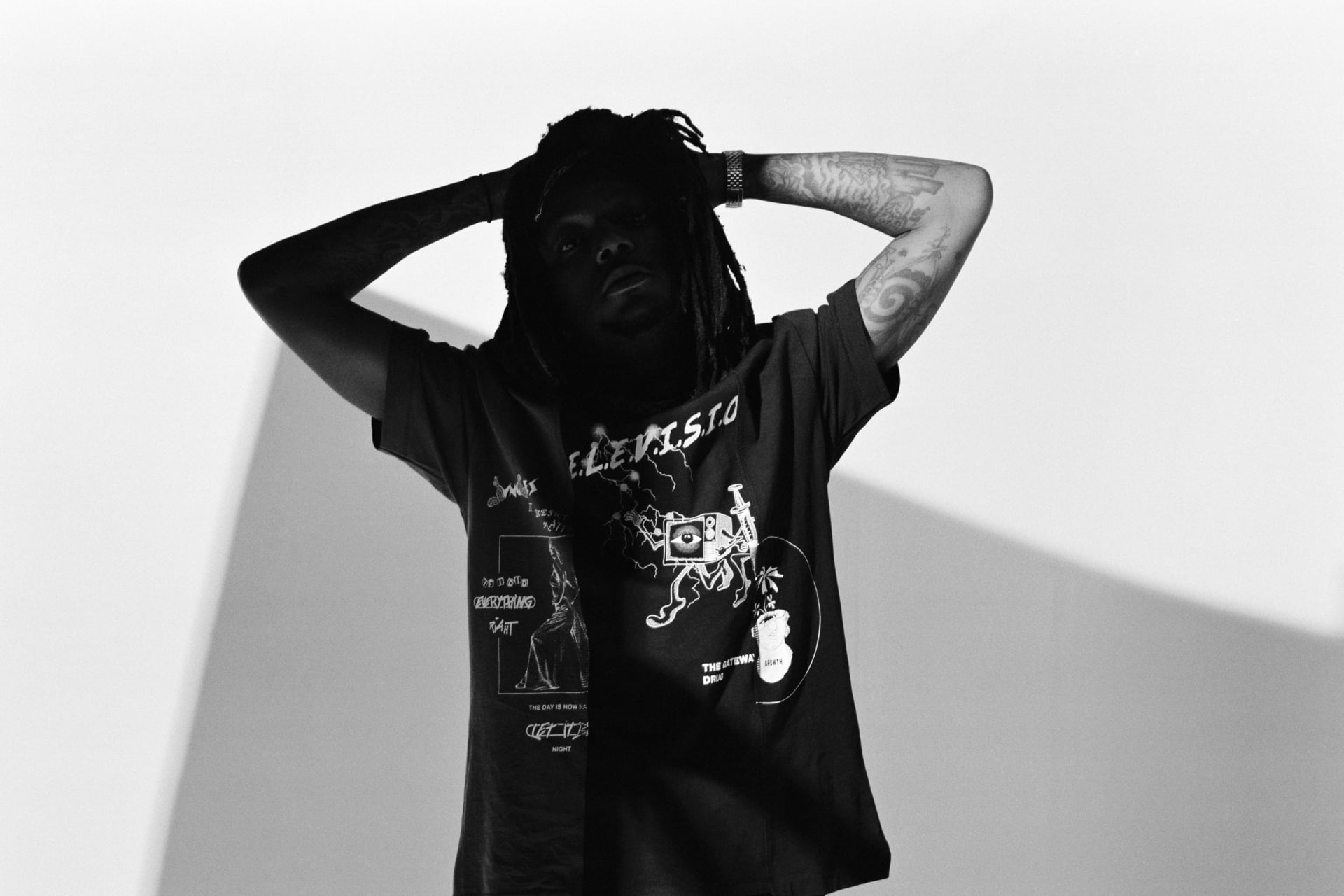 So, in attempting to complete the triad of albums that I’ve been meaning to review for the last few weeks, next up is The Forever Story from one of Dreamville’s resident ATLiens, JID. JID has always been someone that I have had my eye on, and as far as the new generation of emcees out, he’s in the top tier. The problem is, as dope as his material is, as controversial as this sounds, none of it screamed “essential.”

Hell, I won’t lie; when I first heard about JID around the release of The Never Story, he sounded like a Kendrick Lamar clone with a southern twang. I think he just needs that one project that sets him apart from the rest of the crop and definitely out of J. Cole’s shadow. I’ve only listened to this album one or two times and don’t remember any of it. So, I need to go into this joint clear mind and see what this sounds like without any reservations or biases. Can JID step out of the shadow? Let’s see!

1. Galaxy
Produced by Monte Booker
I don’t know who that bama is at the end of this intro, but I’m assuming this has to do with what may be the theme.

2. Raydar
Produced by Christo, Pluss, Nonstop Da Hitman, Childish Major, 2one2, & Quincy Riley
Prepare to throw ya bows and break your necks here. I was on the fence here with this at first; maybe it was my mood at the point I first listened here. But it will serve its purpose. It’s more to set the tone and scene for what’s about to come. I likes. Good start.

3. Dance Now
Featuring Kenny Mason; Produced by Aviad & Christo
As far as singles are concerned, this didn’t grab me as much as “Surround Sound” did, but this is a dope uptempo banger. There are some horns in the second verse that reminds me of “Spottieottiedopalicious” (just thought I’d throw that in there). Plus, JID is rapping his ass off here in which this is not going to be anything new throughout the album.

4. Crack Sandwich
Produced by Nami, Cardiak, TBHits, Groove, & Christo
A break from the double time flows as JID raps over a more boom bap/traditional Hip-Hop influenced beat. The lyrics and verses of the song depict memories that only kids in large families growing up in the hood can relate to. Even the refrains between verses detail a conversation between family going on in one room, talking over one another. It’s the blend of humility and braggadocio that makes JID the lyricist he is. This is dope.

5. Can’t Punk Me
Featuring EARTHGANG; Produced by KAYTRANADA & JD Beck
Part Spillage Village reunion, part Dreamville collab. Here’s my thing. While the song ain’t bad. I just wish I was more into EARTHGANG than what I am. I still haven’t even listened to their album this year. Original or deluxe. Is it good? Either way, I like the delivery here; I just wish the beat complimented it more.

6. Surround Sound
Featuring Baby Tate & 21 Savage; Produced by Christo, DJ Scheme, & Nurі
When this song came out earlier in the year, this was in non-stop rotation. Like everything just fits, the “Ms. Fat Booty” sample, JID is flowing like water from a faucet, 21 plays his role all the while getting better as a rapper, projecting more in his vocals, differentiating his flows, Baby Tate’s unnecessary yet welcome break in the chorus, before then beat change and JID getting back in his pocket rhyming word off of word off of word. Run the crown.

7. Kody Blu 31
Produced by Christo, Benji., Yuli, & Tane Runo
One thing I think we forget is JID’s ability to carry a song through the majority of it being singing. I love how with every portion of the song, it builds more and more, with the background vocals behind him swelling up more and more. JID’s verse tugs on the heartstrings while he goes through his adversity as an entertainer, as a young black male, his family’s struggles, and trying to overcome all of it.

8. Bruddanem
Featuring Lil Durk; Produced by DJ Khalil, TU!, Christo, & Yuli
This track is a weird one. Mainly cause I cannot break the stereotype of hearing Lol Durk over only drill/trap beats but he fits here for the most part and doesn’t overwhelm the song. The soulful instrumentation and JID’s vocal harmonies fit this more than Durk, but I guess you can say this is a story of two halves.

9. Sistanem
Produced by Hollywood Cole, Christo, & Yuli
James Blake has a way of just appearing when you least expect him. In the third verse, it appears that he is talking to his sister (hence the title of the song) and he is pondering rectifying their relationship until the twist at the end that unravels that idea.

10. Can’t Make U Change
Featuring Ari Lennox; Produced by Elite, Christo, Bass Charity, & A.J. Hall
The song started off good. Slow build-up, Ari doing her thing on the hook. As the song progressed, I was worried that the song wasn’t going to go anywhere, and then came the beat switch and JID’s verse where he proclaims that he wants to change his ways for his significant other but can’t help but to succumb to his vices as a man. It’s a song that was saved by the change-up.

11. Stars
Featuring Yasiin Bey; Produced by BADBADNOTGOOD, Christo, & Eric Jones
The rise, the fall, and everything in between is depicted in here and makes me think about my time doing music then and now and all that comes with it. I’ve put the chase of fame to the side and do it because I love to make it, but I think back to wanting to be like who I saw on my TV and heard on the radio every day. Never once did I imagine of what it would be like when you finally get there. Hypothetically speaking, that is. Hearing Yasiin Bey here is a welcome added extra… yet at the same time, I scowl at how he and Talib Kweli botched that rollout of the new Black Star album earlier this year. Sorry, I’m not spending $10 a month where the only way I can hear is to sit through your podcast. Sorry. Not sorry.

12. Just in Time
Featuring Lil Wayne & Kenny Mason; Produced by Christo & ​Monte Booker
Kenny Mason’s role is really downplayed on this album. To where I forget he’s on this album. JID and Wayne is like a match made in heaven here, and is a reminder that Carter 6 is on the way. Great braggadocio track.

13. Money
Produced by Khrysis
JID’s rapping on here is great; I can’t take anything away from him. What’s bugging me is not just this production here but the kids singing here on the hook. It’s just a little too playful, too tongue-in-cheek in regards to the intended humor here that it takes me out of it. Okay song, but I won’t come back to this one a lot.

14. Better Days
Featuring Johntá Austin; Produced by Christo, Benji., & Hero The Band
Another personal track where JID laments about his relationship with his best friend, from humble beginnings to growing apart due to JID becoming a rapper and his friend getting caught in the system. Now he prays for better days in hoping he can see his friend again without looking at each other through a glass window. It cuts deep when you have friends that you grew apart from due to whatever circumstances. Great song.

15. Lauder Too
Featuring Ravyn Lenae & Eryn Allen Kane; Produced by James Blake, ​Monte Booker, Groove, & Thundercat
James Blake produced this one. I like the beat pulsating while JID gets rapid-fire with the flow. There’s tension within the rhythm. It reminds me of Stankonia-era Outkast; a beat Andre 3000 would rip to shreds with Big Boi complimenting it with his trademark swagger. Yes, I said swagger in 2022, shut up. Great way to end the album.

Out of his catalog, it is definite that this is his best album and his most standout project to date. I don’t expect fans that only know him for “that’s the guy on J. Cole’s label” or “that’s the rapper on that Imagine Dragons song” to understand. I’m Bad Luck Fale on these hoes, fuck em!

JID has managed to improve on his flow, perfect his storytelling, and, all the while, craft singles that can stand next to what is currently on the charts without sounding as one-dimensional as some of those songs may be. These are songs that are suited better within an album context, so don’t expect any songs that you can just take away and just throw anywhere, every song flows into the other, and it works better that way. I will not say this is a classic by any means or the album of the year, there’s too much competition that has come out and is soon to come, but JID has come up with his best work to date and should be a reminder to this generation of rap fans, these young cats got something to say.