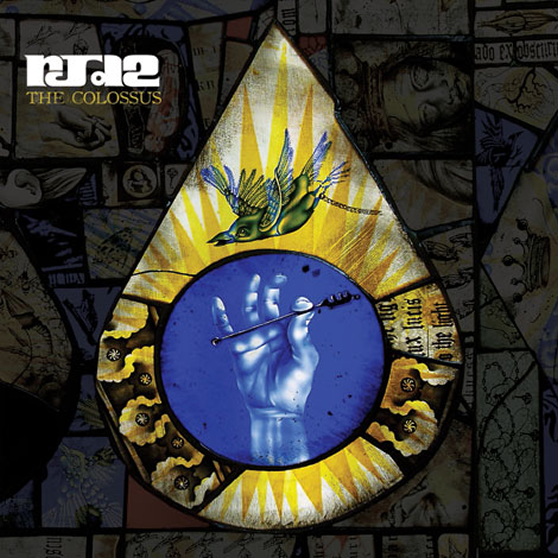 To be honest, I’m not really into instrumental CD’s. Of course there are some exception like Dilla’s Donuts, but for the most part I much rather have lyrics over beats. So you can see how the task of reviewing RJD2’s new album The Colossus would seem a little daunting to me. Add on the fact that beside the theme from Mad Men and few other occasions, I really haven’t given his previous albums or music serious listens.

But hey no problem, I just did some research (Yea, we do research at nappyafro) and checked out his previous albums such as Deadringer (2002), Since We Last Spoke (2004), The Third Hand (2007) plus some assorted cuts for EP’s and collaborations like The Horror, Magnificent City with Aceyalone, & Things Go Better With RJ And AL with Blueprint. What I did come away with from checking our music from RJD2’s catalog is that he’s a talented instrumentalist and his work if not anything is interesting and thought out.

The Colossus is actually a departure from his last album, The Third Hand, where RJD2 stepped from behind the boards singing and playing live instruments on nearly every track. He does it sometimes here on Colossus to mediocre results; both “The Glow” & “Gypsy Caravan” sound like music I’d here at the Gap. Not bad but not my cup of tea. When RJD2 does go get assistance, the results are better. On the Phonte featured “The Shining Path” the production gives the Little Brother member a soulful but  good change from the superb R&B he’s been recently doing with Foreign Exchange. “Game You Can Win” has singer Kenna backed by keys and synths to arguably the best song off the album. Aaron Livingston also makes a good showing on “Crumbs Off The Table”.

When RJD2 breaks out the instrumental productions, you see he still crafts them with care and detail. The first track off the album, “Let There Be Horns”, starts off the album with a bang and had my iPod on repeat noticing all the intricacies put into it (The music video for this is crazy too). The spacey “A Spaceship For Now” and “Giant Squid” (Which for some reason reminded me of Rick James) also show RJ’s skills; I didn’t love the last two tracks mentioned but I can see the talent.

The lone rap track on the album, “A Son’s Cycle” featuring The Catalyst, Illogic, & NP, shows new listeners that RJD2’s complicated productions can still be complemented with lyrics.

Bottom Line:
Out of the 14 tracks (Not including the iTunes bonus track), I think most open minded listeners will find a lot of things to like about The Colossus. There may be moments that will have some hitting the skip button but for the most part you can appreciate the work. It’s not “colossal” but it does the job.