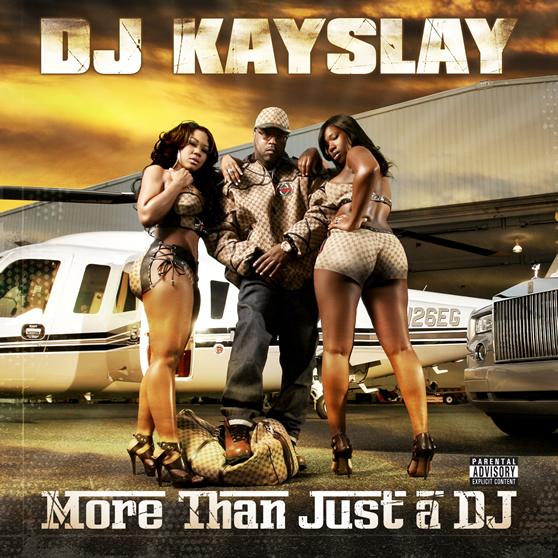 The DJ steered compilation album is nothing new in Hip-Hop. In recent years people like DJ Khaled and DJ Drama have held down this lane. Why can’t Kayslay get some love too? Well, it looks like after checking his Rolodex and calling in some favors (And getting some Straight Stuntin’ models for the album cover) Kayslay releases his official album More Than A DJ.

1. Intro
Featuring Busta Rhymes; Produced by DJ Scratch
Busta Rhymes comes in and helps Kayslay start off the album. DJ Scratch provides a beat that fits an intro track. Busta’s rambling flow, while not spectacular, does the job with one long verse and no hook.

2. Men Of Respect
Featuring Tony Yayo, Papoose, Lloyd Banks, Jim Jones, & Rell; Produced by Amadeus
It’s still weird seeing Tony Yayo & Lloyad Banks on a track with Jim Jones & Papoose. What’s even more weird is that I feel Yayo had the best most entertaining verse on the track; nothing quotable just better than his peers here. Actually, the beat is the real star. Without that the track would probably stay grounded. Plus Rell on the hook stalls thing s a bit.

3. Bad Girls
Featuring Jackie-O, Remy Ma, Hedonis Da’ Amazon, & Avanna Irish;Produced by Neo Da Matrix
Kayslay says he has “the best” women MC’s on this track. Naw. Sadly that title probably goes to whoever is featured on Ludacris’ upcoming Battle Of The Sexes. Aside from that track being average, Jackie-O sounded better that I previously heard her and the Remy Ma verse sounds a little dated too (She’s still in jail right?). The beat samples David Axelrod’s “The Smile” (Royce Da 5’9” used it on “Shake This”).

4. Blockstars
Featuring Yo Gotti, Jim Jones, Busta Rhymes, & Ray J; Produced by Street Radio
Most of the time if I see Ray J’s name on a song I immediately hit the skip button, but I got to give the track an honest listen right? It’s boring. I give props for putting a different mix of rappers together but there is energy and cohesiveness here. Plus the Ray J feature ain’t helping (Sorry, I tried).

5. Monster Muzik
Featuring Cam’ron & Vado; Produced by AraabMUZIK
With KIlla & Vado on a AraabMUZIK track, you’d think this a leftover track off of Boss Of All Bosses. Naw, but it could fit there with no problem. I personally am not feeling Cam’s music as of late, but if you do you’ll like this: “They had to hated/Agitated/Cash related/I tell you bitch grab my dick/Huh now mastibate it”. Meh…

6. Layed Out
Featuring Bun B, Twista, Papoose, Dorrough, Young Chris, & Jay Rock; Produced by Sparkz Tha Trakman
Another eclectic mix of rappers here. This time if works better seeing that the talent is raised. The hard hitting beat provided by Sparks Tha Trakman could be a soundtrack to getting knocked out to in the club. Papoose does a good Twista impersonation too. Good track.

7. Gangsta Shit
Featuring OJ Da Juiceman, Papoose, & Yo Gotti; Produced Zaytoven
Holy shit! OJ fucked this beat up! No, I not saying he killed it in a good way. I mean he messed up a beat and a song that had potential. Why give him the first verse? Papoose and Yo Gotti are not talented enough to save it after that. If I was Zaytoven I’d double dip resell this shit to another rapper.

9. Let’s Ryde Together
Featuring Trick Trick, M.O.P., Trae Tha Truth, & Tre Williams; Produced by The Alchemist
It seems Kay wanted to get all the MC’s who will most likely rob you all on the same track. Okay then why put this Eddie Kane Jr. sounding hook on it (And I think Tre Williams is talented). Is it about a relationship? Is it about riding out? Lack of direction takes this song down a few notches.

10. Thug Luv
Featuring Maino, Papoose, Red Cafe, & Ray J; Produced by Statiq & Denaun Porter
Most of the time if you sample Luther Vandross you’ll win; it works here too (Especially using “Don’t You Know That”). All the rappers involved fit bill, keep in on topic, and turn in good verses (According to Maino he’ll beat a bitch!). Did Kayslay just book Ray J for one day and have him do as many hooks as possible? Check out the music video here.

12. See The Light
Featuring AZ, Raekwon, & Ghostface; Produced Sean C & LV
Best. Song. On. The. Album.
From the beat, the parings of AZ, The Chef, & Starks; this all makes sense. This is also the first track that made me look forward to More Than Just A DJ. The Sean C & LV production here stands out as it mixes all of the styles involved. Be sure to check this one out.

13. Hustle Game
Featuring Bun B, Webbie, Lil’ Boosie, & Nicole Wray; Produced by The Alchemist
Yea, the combination of Alchemist with Webbie and Boosie had me scratching my head too. But the results weren’t bad at all; it’s actually good to here the Trill Entertainment boys over a beat like this (Boosie probably had the best verse). Not bad at all (Reminds me of the P$C/Alchemist joint).

14. God Forgive Me
Featuring Joell Ortiz, Jae Millz, & Saigon; Produced by DJ Infamous
This track changes up the mood and goes more introspective. It may seem boring to some but you need tracks like this on this album. Okay, it is kinda boring but it’s not bad. You may need to give this a personal listen to make your own judgment.

15. Kay Slayed ‘Em
Featuring Uncle Murda, Mistah FAB, & Grafh; Produced by Drew Correa
This track is based of the Kanye line “Cause after all of the drama, K slayed ‘em” from “Can’t Tell Me Nothing (remix)” (It switches up during the hook and verse). Nobody “slays” the track (Uncle Murda shines though) but it’s still a run of the mill track.

16. Make The Block Hot
Featuring Nina B, Mike Beck, KI Grip, Lucky Don, GI, & Nutso; Produced by Drew Correa & Laurent “Slick” Cohen
I think this “new cats” that’s on almost every Hip-Hop DJ compilation. I have heard of Mick Beck; he was the rapper (From the group K.A.R.) who was shot and killed last year. Even though the song is forgettable it was a good nod having him feature him.

17. You Heard Of Us (remix)
Featuring Sheek Louch, Styles P, & Ray J; Produced by Swiff D
Another Ray J chorus? Mix that with 2/3 of the LOX that doesn’t feature Jadakiss and the results are awkward (Did Brandy’s brother say he would bust a nigga’s head?). Not to completely write off this, I like Styles verses plus the sample is recognizable. The feeling of the track just doesn’t mesh well (The video has the same feeling too).

18. Street Credibility
Featuring San Quinn, Big Rich & Hood Stars; Produced by Swiff D
Bay Area is in the house on this track. It’s good that Kay is giving room for the Yay to shine, but I’m surprised the placing of this track; it kinda doesn’t fit here. But hey, even though I barely recognize the names here, the hometown love track is okay. The hook? Not so much.

Bottom Line:
The main problem with this album is that it follows the DJ compilation directions but not very well. It has a varied cast that’s not really all-star caliber. It has some notable names for production but not enough a-list work. While there are brief moments that show promise, in the end the product feels unpolished. Good thing Kayslay has a magazine & radio shows to fall back on. Hey, I guess he is more that a DJ.