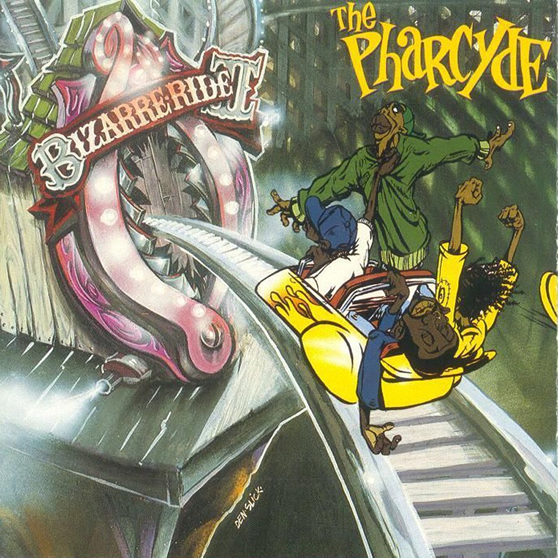 Another 90’s west coast album gets the Classic Material nod this time around. Similar to 93 ‘Til Infinity, this record was released way ahead of its time. When the “gangsta rap” image was starting to build out in the west, three dancers (Slimkid Tre, Bootie Brown, Imani) met up with Fatlip, and producer J-Swift to form The Pharcyde.

They went on to make the classic Bizarre Ride II The Pharcyde. The record only received a Gold certification, but everyone should note that this wasn’t an album for the west coast at that time. If the group came out of New York with groups like De La Soul, A Tribe Called Quest, Jungle Brothers, then I guarantee the group would’ve gone Platinum, and received more recognition.

The thing about The Pharcyde is they are all nice on different levels. Much like the Wu-Tang Clan, each member has a different style, but in the end their chemistry always comes together. For example, there is hardly a definitive person who takes the track lyrically. Each member has a similar yet diverse style that can have some fans loving their verse on one track, then liking someone else’s verse more the next time they hear it.

I’ll first get into some of my favorite tracks off the album. I feel the best way to show how creative and talented this group was is by giving a five track song review…

“Soul Flower (Remix)” – This is one of their first songs to get released, and its nothing less than amazing. This is the remix version; however, I prefer this beat over the original (released on Brand New Heavies’ Heavy Ryhme Experience album). “Soul Flower” is really about their introduction into Hip-Hop. They didn’t have any concept or crazy story, but they did illustrate their hilarious lyrical abilities. One of my favorite parts of the song is when Fatlip finishes it, “Yes I come from Cali, no I do not have a perm/I stand firm on the mic device when I gets nice/Don’t roll the dice if you can’t pay the price/I got more flavor than 7-11 Slurpees/If Magic can’t admit he got aids, then fuck it – I have herpes.”

“Officer” – Fatlip starts off the track reminiscent to the Public Enemy classic “Black Steel in the Hour of Chaos”, “I got a letter the dmv, the other day, I opened and read it, it said they were suckas”. From there on, the track is made more into a storytelling song of how their day went. Fatlip ends up saying fuck it and decides to drive anyway. The story continues with Bootie Brown jumping in the car, and suddenly regrets getting in by how Fatlip is driving. Imani gets on the mic next and helps explain the situation, “away…to our destination, no license no insurance, not even registration, tags on the plate say December ’82, car’s so dirty it looks gray, but it’s really blue”. Slimkid3 finishes the track, and illustrates how he is reacting to getting pulled over. In the end, they all go to jail.

“Passing Me By” – This is one of the best hip hop songs of all time. Everyone should at least have this song on their iPod. All four emcees speak on that one special girl they’ll never have. Bootie Brown starts the track on a good note about his feelings for his teacher. Next, Slimkid3 speaks on this girl (Shelly) that he’s been chasing around. Then, Imani lets us know how he had to let his last girl go. Finally, Fatlip drops one of my favorite verses of all time,

“Now there she goes again, the dopest Ethiopian
And now the world around me be gets movin’ in slow motion
when-ever she happens to walk by – why does the apple of my eye
overlook and disregard my feelings no matter how much I try?
Wait, no, I did not really pursue my little princess with persistence;
And I was so low-key that she was unaware of my existence
From a distance I desired, secretly admired her;
Wired her a letter to get her, and it went:
My dear, my dear, my dear, you do not know me but I know you very well
Now let me tell you about the feelings I have for you
When I try, or make some sort of attempt, I symp
Damn I wish I wasn’t such a wimp!
‘Cause then I would let you know that I love you so
And if I was your man then I would be true
The only lying I would do is in the bed with you
Then I signed sincerely the one who loves you dearly, PS love me tender
The letter came back three days later: Return to Sender
Damn!”

“Pack The Pipe” – This is Pharcyde’s song dedication to smoking weed. If you haven’t figured it out, much of their lyrics are heavily influenced by getting high. Slimkid3 steps up to the mic first and spits a few funny lines about how he’s trippin’. Bootie Brown drops a hot verse, and lets us know why he prefers marijuana over tobacco. The thing I really like about Bootie Brown’s part is the repeated lyrics in the background. It was nicely done like he is talking to himself. The highlight of the song comes from Fatlip. Who else would rap about getting a kid high for the first time? Imani jokes around during his verse, and guest feature Quinton ends it with a nice freestyle.

The above songs aren’t the only highlights on the album. How The Pharcyde can rhyme about anything is what makes them great. “Ya Mama” is a comical track that has them bagging on each other’s moms. Similar to “Soul Flower”, each member contributes to the chorus in their own way… a different yo mama joke. Slimkid Tre (along with L.A. Jay) produced the only song that’s not done by J-Swift titled “Otha Fish”. The song is about a breakup Slim is going through, and how there will always be other fish in the sea. This song can make anyone feel good while going through a breakup.

These songs along with “Oh Shit”, “4 Better or 4 Worse”, “I’m That Type of Nigga”, “If I Were President” show how outstanding and original this album actually is. If I would rate it among my top Hip-Hop classic albums, it would definitely be in my top ten. This was an album that covered so many social topics in an entertaining and talented way. The record is ranked number five on Chris Rock’s favorite Hip-Hop albums of all time. Plus, The Source magazine has it in their 100 Best Albums.

On a side note, this is not the only superb album by The Pharcyde. LabCabinCalifornia is another classic. That record is a little more mature, and is unfortunately the last album by all four original emcees.