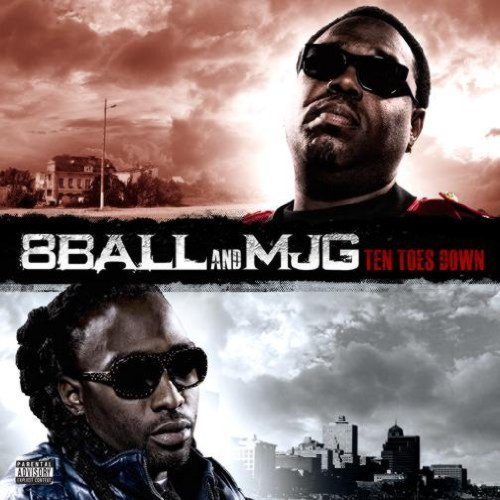 Orange Mound, Memphis should be proud. If Hip-Hop were professional sports, it’d be no arguing that 8Ball & MJG would make it in easy. Almost 20 years of making music Hip-Hop as well as influencing generations of upcoming rappers (Especially Southern rappers), the duo has a lot to be proud of. Recently, after releasing two album’s under Daddy’s Bad Boy South (Living Legends & Ridin’ High), Ball & G made the jump to T.I.’s Grand Hustle imprint. Now they unleash their 8th album, Ten Toes Down.

1. It’s Going Down
Produced by Drumma Boy
The album starts of with a hard-hitting beat from fellow Memphis native Drumma Boy (Who produced 3 other tracks on this album). The hook (“Fat Boy from the town/With my nigga MJG”) makes people realize that almost nothing has changed with 8Ball & MJG as both go back and forth with ease. Nice start.

2. Bring It Back
Featuring Young Dro; Produced by Nitti
This is the first track I heard off this album and on my initial listen, I kinda shrugged and moved on. Maybe I was tired or preoccupied because now, THIS IS MY SHIT! For the beat (Nitti gave them a banger) to the chorus (The girl was a nice touch). Everybody here does a good enough job, but unfortunately, the T.I. remix is much better. Why? Tip gives us his best flow since he was released for federal:

“In the club first time in a year so/My shit still bang in the club from a year ago/Everybody tuned in to their stereo/Wanna hear the King kick it? Okay here we go…”

You can also check out the music video here.

3. I Don’t Give A Fuck
Featuring Bun B; Produced by David Banner
Is it me or do a lot of David Banner’s beats still sound like “Rubber Band Man”? The same can be said about this track but it still works. The heavy guitar over the tracks fits the Memphis duo’s lyrics. By the time Bun B comes in on the last verse, your already singing along with the hook: “I don’t give a fuck/I’m a come down gripping my nuts/With a big booty bitch and a big body truck…”

4. Ten Toes Down
Featuring Lil’ Boosie; Produced by Drumma Boy
The chorus here was a little boring for my taste (“Ten ten toes down, ten ten toes down…”). Boosie Bad Azz fans will want to check this out seeing as he talks about his then upcoming jail time in his verse. Nothing really quotable. Still an average track.

5. Fuck You Mean
Featuring Soulja Boy Tell ‘Em; Produced by B-Don & SuperCed
No that’s not a typo; Soulja Boy gets a feature on a 8Ball & MJG album. But the combination isn’t as awkward as I thought. It’s not magic but it’ll do. I mainly thankful that SB didn’t produced as well (THEN that would not be a good luck). With the hard bass as well as the sing-a-long hook, I can see this getting spins in the club.

6. We Come From
Featuring David Banner; Produced by Midnight Black
Here the subject of this track is hometown pride. And while both 8Ball & MJG do a great job of putting on for their city (“Cornbread fed goons if you wanna act hard” – MJG), it’s tough for anyone to top the David Banner’s love for Mississippi:

The song as a whole is not a homerun but it’s worth a listen even to just hear this verse.

7. She’s So Fine
Produced by Swizzo
We get the obligatory “for the ladies” track with “She’s So Fine”. Sorry, but I don’t wanna hear about 8Ball “nibbling on kitties”. I know what they were trying to do but with the whole Bobby V vibe…naw.

8. Grinding
Featuring Ricco Barrino; Produced by Nard & B
This sounds like something that would be on DJ Khaled’s album. It’s another song about/for the women folk but not as bad as the previous track. The track doesn’t really bring anything new you haven’t heard from any other “down ass chick” rap songs. What sticks out most is line like “Now I’m that other guy/A family man slash pimp undercover guy”. What happened to “Space Age Pimpin””?

10. Right Now
Produced by Mo B. Dick
Ha! I didn’t know Mo B. Dick was still doing his thing. The track is real bluesy and soulful and put in the minds of older material for Ball & G. Some listeners will be thrown off by the slow tempo of this track, but the message of life struggles and well as money trouble will still come through.

11. What They Do
Featuring T.I.; Produced by Lil’ C & 1500 Or Nothin’
When the duo signed to Grand Hustle I think we all expected a T.I. verse on their album. Here it is. As with anything that has 1500 Or Nothin’ behind the boards, you can expect live instrumentation and you get that here also. I’m actually surprised they didn’t go for an up-tempo track but this is fine. The subject is overcoming is adversity and I can’t hate on that. That track is still just okay though.

12. Billy (Truth Be Told)
Produced by Nard & B
I thought this was gonna be a straight storytelling song but only on MJG’s verse is this true. It’s not an inventive story and the singing on it didn’t work for me. I did like Curtis Mayfield sample though.

13. Life Goes On
Featuring Slim Thug; Produced by Drumma Boy
Off the rip I’ll go ahead and say this track is one of the standouts on this album. Mainly because of the production and secondly because Thugga does his thing:

“Radio only play shit that’s wack/They ain’t trying to hear a nigga spit these facts/So I guess I’ll never get me no plaques/Shit I’ll quit before a nigga do that.”

14. Still Will Remain
Produced by Drumma Boy
It was a good idea to get a Drumma Boy beat for the closer. Here MJG and 8Ball explain that after all the changes in the rap game as well as personal trail, they will still be around. 8Ball – “And people ask me, ‘How you still got love for it?’/For real, sometimes I hate I just never show it”. Not a bad note to end on.

Bottom Line:
I was so close to giving this album 3.5 Stars. Then I realized that I only really like 2 songs. The others are mostly okay, but only “Life Goes On” & “Bring It Back” get the real spins from me. Still, it’s good to see 20-year Hip-Hop vets still putting albums. I’m also glad to see them work with popular producers like Drumma Boy, Nard & B, & Nitti. Even though Ten Toes Down won’t be on Top Ten list at the end of this year, it’s still a respectable outing for the duo from Orange Mound.