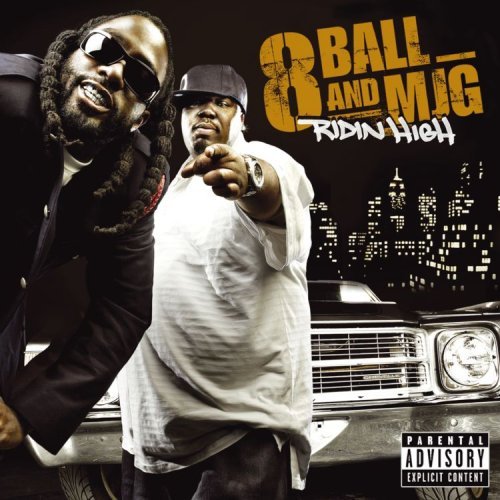 One of the most highly respected southern rap group returns with a new album, Ridin’ High, 14 years in the game, and these cats are still bringing that wood to the plate.But after a couple of disappointing efforts of late, can the boys from the Mound stay afloat in this wish-washy game we call Shit-Hop, oops I mean Hip-Hop?

The “Intro” starts off nothing really major just an intro, I mean what y’all expect these days? Now “Relax and Take Notes” samples Biggie off of “Dead Wrong”. This beat is hot, except for the Cali sounding horns in the background. Ball & G bring a lil’ something to the plate, definitely a club banger! Project Pat lends a typical 16, but COP THIS! “Ridin’ High” the title track….SKIP IMMEDIATELY! Okay after that I need a song like “Turn Up the Bump”, the beat will have the trunks beating, gotta love the way Ball & G flow like they hungry again. Now we have a love song, “Cruzin’” featuring Slim of 112, I just don’t go to 8Ball & MJG for my love songs…moving along! “Whatcha Gonna Do” featuring Pimp C, starts like your typical crunk song, kinda bouncy; we’ll bouncing to the next track! “30 Rocks” is terrible the beat is horrible! An interlude is next, come on people, just make music! Now this song better live up to the name “Hickory Dickory Dock”, well, it is a very sophomoric song. The college kids will love it, and that’s not a good thing. “Running out of Bud”, a song for the smokers, samples “When a Woman’s Fed Up”; kinda of hot, if you are into those type things. “Clap On” featuring Yung Joc, sounds like another one you’re gonna hear at the club, so if you’re a clubber, make sure this is on your Going To The Club playlist on your iPod! Did I say that “Hickory Dickory” was sophomoric? Well “Alcohol, Pussy, Weed” tops it all. Just what we need, another song glorifying that which is considered the downfall of our culture. SKIP! Another interlude, kinda of funny, but I would like to endorse “Pimpin Don’t Fail Me Now”; the hook I hate, but Ball & G, and Juvie made up for it, CHECK FOR THIS! “Worldwide” hits you like BAM! But they seem to just stumble through this one, should have been better. 8Ball & MJG must really be going after the club crowd with this album, because “Take it Off”, will be in the strip club….where the strippers be at! I mean if you are into those types of things. “Memphis”, the title is self explanatory, an ode to the hometown, GOTTA BANG THIS ONE! With the way the album is going “Get Low” was thought to be another club track, but it wasn’t that at all, it was GARBAGE! The last track “Stand Up” sounds like “My First Song”, by Jay-Z. Ball & G showed some lyrical ability, ripping the beat riddled with some gangsta guitar riffs! GET THIS!

Bottom Line:
Well to be honest with you, this is what I expected from 8Ball & MJG, a subpar album for them, but okay in today’s shitty Hip-Hop climate. The Puffy thing in their case is a good and a bad thing. They need Puff for exposure, but the bullshit he has them doing is messing up their legacy. Four words…GET RID OF DIDDY!