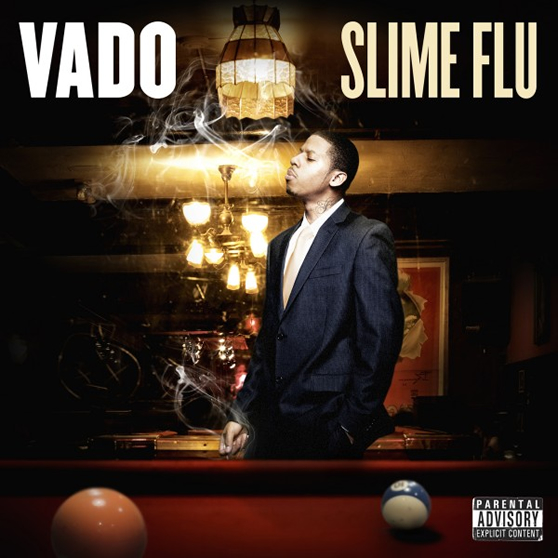 *DISCLAIMER* Here at nappyafro we are always trying to bring you the best reviews of what you guys want to hear. Some artists we cover and some we don’t. When you don’t see a review for a certain album that you want to see or you think you could do a better job, we are the ONLY site that gives the readers a chance to write their own review. A few people have taken us up on this offer and my man (PAUSE) P from the D is the latest to step up to the plate and do his best to give an “unbiased” review. – King Jerm (You can read the unedited version here)

I’m really excited about this one. Harlem bred Vado is Cam’ron’s newest protege and may be New York’s next best thing. This is his highly anticipated Slime Flu tape. This is also not an official album release, but its a mixtape that not available for free sort of like Gucci’s Burrrprint or whatever it was called. If you so called Hip-Hop heads want a change for the better in rap or a return of East Coast, this might be it.

1. Council Music
Crazy smooth beat. Sounds very Dipset like. “You write lines, mines define movies” just a jewel drop. Vado spits over this one crazy really cool track. Don’t understand why this is an intro though.

2. Polo
Produced by Omen
I loved this one when I first heard it and I still love it now. The beat is absolutely crazy. This is what separates Vado from other up and coming New York rappers. The fact that he can spit then change it all to something young listeners all over the country can feel. He’s not at his lyrical best on this track but he doesn’t have to its a song about Polo.

3. The Greatest
Produced by 4th Quarter
Sounds like a beat from the first Diplomatic Immunity and that’s something I absolutely love (I miss those days). This one was an almost perfect except for the hook it throws the song off.

4. Beat Knockin’
Produced by Jahlil Beats
Not to hard to figure out what this is about. Vado goes right in on this one. The production on this is almost flawless so far. Not much else to say about this one though.

5. Celebration
Produced by Feva Beatz
I can tell right from the jump I’m going to like this one; This is definitely top notch album quality. Songs like this is what makes me laugh at people that call Vado a mixtape rapper. He just needs to get better hooks.

6. Wake Up
Very New York here (Which you barely hear anymore). “Throwin up on his shit cuz I don’t spit I vomit” jewel drop. Perfect track

7. Rugby Down
This is the first one I’m really not feeling. In case y’all ain’t know Rugby is from Ralph Lauren and I guess is very popular in New York. Not terrible though just not feeling it.

8. The U.N.
A song called the U.N. not featuring Cam?. Okay. Once again spectacular soulful beat. Once again Vado spits but once again bad hook. Not hating it though.

9. Bullets & Gunsmoke
Featuring Meek Millz
The first feature on the album is from another one my favorite up and comers Meek Millz. Beat sounds like a Jeezy beat and shows that this album is definitely not low quality. Meek fits perfectly over the track and comes with a crazy flow.

10. CrimeSquare
Featuring Gruff
For all of y’all missing the DJ Premier days will love this one. Sounds like 1995 and its cool. The official title said featurintg Griff but I’m pretty sure they meant Gruff as in Mcgruff the Crimedog aka Harlem legend and former member off Children Of The Corn (the group Cam, Mase and Big L came from). I think it was really cool and real for Vado to put him on the track and it works well.

11. Snapped
I love how Vado can switch it up. Shows Vado skills as he goes into storytelling. Reminds me of a Raekwon story track. Short but cool.

12. Filthy Game
Featuring Jae Millz
For all those who didn’t know Vado used to be Jae Millz right hand man, and now in only like 1 year Vado is lapping him on one leg. Once again very New York, very old school, and Jae Millz just kind of blends in. People have been asking for rap like this for years now. Its hear and now most of them still talk shit about Vado.

13. Shoot ‘Em
Featuring Cam’ron
The first song featuring Cam’ron and to tell the truth I was glad the album wasn’t littered with Killa features; Vado has to establish himself as an artist. Sounds like the typical stuff you hear from Vado and Cam. Nothing special.

14. Speaking In Tongues
Featuring Cam’ron
Everyone should know this one by now. Cam and Vado’s number 1 hit so far. It’s a track that has to grow on you though and if you are not listening to it on a good system you probably won’t like it. But you can say what you want, its a club banger that does what its supposed to do.

Bottom Line:
Vado’s solo debut is as good as I thought it was gonna be. Besides needing more exposure, Vado is definitely one new rapper to watch. I just hope he doesn’t end up like an Uncle Murda or a Saigon or Papoose because he waited to long to capitalize on his hype;. Releases this album does put him one major step ahead.