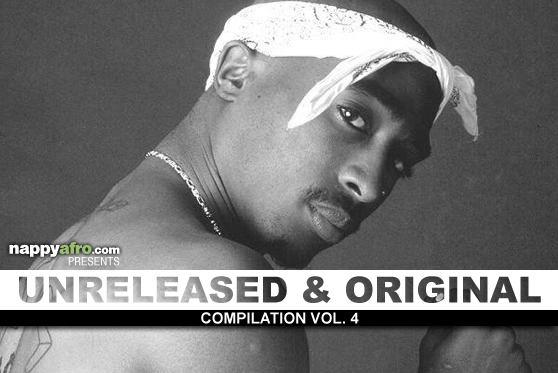 Yes guys and gals this is issue Number 4 and I’m already working on Number 5 as we speak.

I think some of these songs will actually be on 2Pac upcoming album which will be released later on this year from Death Row/Wideawake. They say they will release the songs in original form since Pac still have 50-60 more unreleased tracks we never heard ever. So far they been about they word from some of the albums I heard already they released and these leaks I been hearing such as the “Ride For Me”, “If They Love Their Kidz” and so forth. This will be the only time I’ll spend some actual money on a CD which I haven’t did in a long time.

I had got a request to add “Don’t Call Me Bitch” so check out the tracklisting.

I also put up the snippet of the last 2Pac song “Let’s Get It On” (In CD Quality) he made which was dedicated for Mike Tyson. I hope they released the whole version of it.

“Watch Ya Mouth” full version is on here but it is a phone rip though. I can’t wait until they leak out the whole song one day in the future, not sure when. He goes off on De La Soul, Biggie, Puffy, Dr. Dre, Nas and etc. This song was originally made for the Makaveli album The Don Killuminati: The 7 Day Theory but for some reason he removed the song off the album.

“Reincarnation” is a unreleased song with Fatal and Kastro. Its actually two versions I have. The other version is Pac doing the hook and talking at the end, but the song is Kastro solo song. This version is Pac rapping and doing his thing on it. If you ever seen the documentary Before I Wake you will hear this beat playing in the studio when he was talking to his body guard Frank Alexander family.

I included the unreleased One Nation track “Thug Nigga” featuring LS, Asu, & Greg Nice and I uploaded the original “Hennessy” track which samples is from D’Angelo…. Eminem fucked that song up badly on the Loyal 2 The Game album. When I first bought that CD (Which I knew I shouldn’t have) I wanted to throw it out the window.

I had to throw up the lost session of “Last Ones Left”, and the commercial song for St. Idles (A lot of rappers done commercials for them). Original unreleased version of “Thugz Mansion” that just leaked I had to make sure I post it up since I have two different versions as well.

I hope everybody enjoy these series I been creating for the fans. Stay tune in to Volume 5 which have some more of that fiya!!!!! If Pac isn’t the GOAT then he is one OF the GOAT’s. This mixtape is way over 80 minutes so either you have a mp3 player to play or just be shit out of luck. Enjoy peeps! I’ll catch ya on the next one

*I know people are going to say “P-Body you already put ‘Fortune & Fame’ on the other mixtape* well this version is better since its in CD Quality and I forgot to put this version instead of the other version. This sounds much better, you all will thank me later! Check out “Pain” original movie version! also*