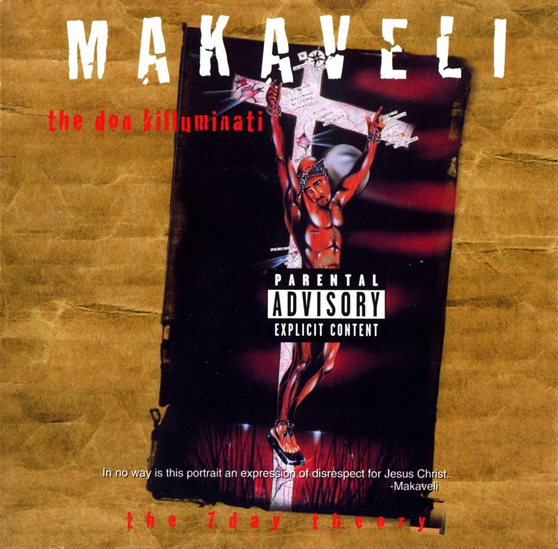 Back in the day, I would do all I could to not co-sign any music by 2Pac. Let me explain. I was, and still am, a huge Notorious B.I.G. fan; especially in 1996. It’s seems stupid now, but in the battle between Biggie and Tupac, I clearly went with the King of NY. Why did I have to choose? That meant I didn’t even think about listening to All Eyez On Me until months later after it’s release. I even fronted on “Hit ‘Em Up”. As I’ve gotten older (And gotten past choosing sides of beefs I have no stock in), I listened to All Eyez On Me (of course), I rate “Hit ‘Em Up” as one of the best diss songs ever, and I give Tupa Shakur the props he deserved.

While I spoke about All Eyes On Me, that’s not my pick for my favorite Tupac album. The Pac Makaveli album I rock with by far is The Don Killuminati: The 7 Day Theory. That’s the album while I put aside the whole, “Pac’s not lyrical” argument and welcomed the thought of how poetic the man was.

The album rightly starts of with “Bomb First (My Second Reply)”. Needlessly to say, Pac goes in. The song is like one you play before going to war: “It’s not about East or West. It’s about niggaz and bitches, power and money, riders and punks. Which side are you on?”. Raise your hand if you rewinded this song to catch Pac saying, “Suge shot me” in the beginning? Yea, it turned out to be fake, but so what.

Who can’t forget “Hail Mary”? Dudes had that song on constant rotation when it first came out. And don’t forget, 7 years later, the format of this song was by 50 Cent, Eminem, & Busta Rhymes to put the nail in the coffin of Ja Rule’s career.

“My & My Girlfriend” finds Pac at his most creative, taking a cue from Nas’ “I Gave You Power”, and building on it. Tupac wasn’t the best with metaphors, but here he comes with it. Years later Jay-Z would take inspiration from this song in beat and lyrics and make “’03 Bonnie & Clyde”. For real songs for the ladies, Pac gave them “Toss It Up” and to an extent, the laid back “To Live & Die in LA”. The latter, “To Live & Die in LA”, is an heartfelt tribute to Los Angeles while “Toss It Up” (featuring Danny Boy, Aaron Hall, K-Ci ,& JoJo) was diss song aimed at Blackstreet and Dr. Dre disguised as a sex song for the women.

My favorite track off the album is by far “Against All Odds”. Yea, he’s still dissing the usual suspects (Nas, Mobb Deep, Puffy, Biggie, etc.), but over the Tyrone “Hurt M Badd” Wrice production, this may be on of the realest things he ever wrote. Matter of fact, that term “The realest things I ever wrote” is forever in the Hip-Hop lexicon (How many times have you heard a rapper say those lines).

So yea, I may not be the biggest Tupac Shakur fan. I may have been on the late bus to some of his music. But I can’t help but gives props to the greatness that is and was 2Pac and The Don Killuminati: The 7 Day Theory. Happy B-Day.