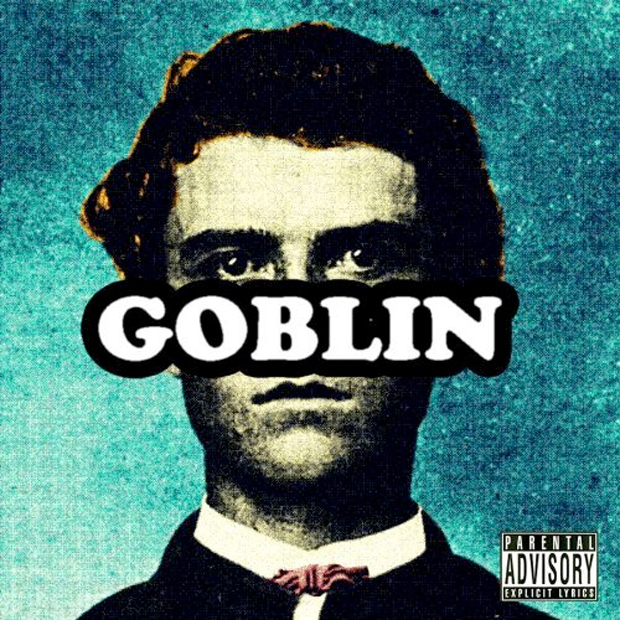 By now I think we’ve all heard of OFWGKTA. The group that took the world by storm in 2008 has been called everything from gimmick to this generation’s Wu-Tang clan. If that’s the case, then Odd Future’s RZA would undoubtedly be Tyler the Creator, who’s production, video direction, and charisma has brought all of the members into the limelight. His first televised performance on Jimmy Fallon signaled a turning point; it proved that DIY-marketing as an artist can help you to make leaps and bounds as an artist. After turning down major label deals, he’s finally signed a one album distribution deal to release Goblin, his first album to be released in stores. Will going commercial change Tyler? Let’s check out Goblin.

Goblin
The intro track of the album which mirrors that of his last album, Bastard, with Tyler talking to his therapist. I don’t think this lives up to the intro from his last album; rather than a long tirade like last time, this intro deals with a lot of the critiques Tyler’s been getting about his music: being classified as horrorcore, his lyrics, and some real details about his life. I feel as though this intro is more personal than the last one because he’s dealing with actual problems rather than just filling it with random ridiculous lyrics. This is definitely a standout on the album, but I don’t think it tops Bastard‘s intro, that was crazy.

Yonkers
The first single of the album mirrors the rest of the album lyrically; it mostly contains non-sequiters about Jesus, threesomes with triceratops, and killing B.o.B. This is all rapped under the Wolf Haley alias that Tyler uses for some of the album. Most people will jump to this track for the beat and the lyrics, but in my honest opinion, the lyrics aren’t really anything to write about; he’s not really saying anything on the beat. His flow over the beat is pretty impressive, however.

Radicals
The song starts with a random disclaimer about how the entire song is fiction, which to me is pointless; I’d assume that if Bill O’Reilly or whoever wanted to attack him for the lyrics in his music, he’d do it anyway. But back to the song: the chorus goes “Kill people, burn shit, fuck school”, so the PSA kind of looks stupid. This beat is ridiculous, and again Tyler flows adeptly over it, preaching tolerance for everyone’s beliefs and just doing what you want. I like the message, but the song is a little too long for my taste, and he barely even spits 16 bars on the whole thing.

She
Featuring Frank Ocean
This is the song for the girls. I like the beat and the hook, but Tyler sounds really weird and out of his element on this beat; he sounds like he’s trying to make a song for girls awkwardly on the second verse, and then makes it a catchy “date me or else” refrain on the third. It’s an OK song, nothing too special.

Transylvania
Co-Produced by Left Brain
This is Tyler, back in his element. This is basically the less soft version of the last song just played. So instead of rapping about getting date, he’s rapping about kidnapping and raping women. Still, I think he sounds better over this song and he flows better over the darker beat. This is just one long verse, but again, it’s not a song I would consider memorable.

Nightmare
Once the beat drops, Tyler wastes no time and just goes in: “My only problem is death/Fuck heaven, I ain’t showin’ no religion respect/Brain-damaged, therapy’s the only thing I regret/Talking to me is like a fuckin’ body missin’ a neck.” This song is pretty personal, about the trials and tribulations he’s been going through, and how his life was hell. He raps about going from being a misfit in high school to drunk driving in cars. This is the most lyrical display yet on the album, definitely another stand out track.

Tron Cat
Within the album’s storyline, Tron Cat is described a dark side of Tyler’s persona, whose voice he hears in his head telling him to do bad things. So this track is an excuse for another “Kill Them All” track: “You niggas rap about fucking bitches and getting head/I rap about fucking bitches and getting heads/While you niggas stacking money, I could stack a couple dead/Bodies, making red less of a color, more of a hobby.” This song is hella lyrical, but again he’s discussing the same topics as before. “Rape a fucking pregnant bitch and tell my friends I had a threesome/You got a fucking deathwish? I’m a genie, it’ll get done.” Even the therapist says WTF after the song is over. There’s not really any substance here, and while the beat is kind of cool, the song just doesn’t grab me.

Her
This is another song about girls, but it’s better because it plays out like a story. It’s about this girl he sees around the way who he likes, but she’s with someone who treats her badly. Still, he just can’t get her to leave the guy for good. He raps some real shit: “My nigga asked ‘Aye, what happened to such and such/I could stutter her name and then tell him I fucked/Or I could tell him the truth and say she ain’t like me much/Instead I lie and say she moved to Nebraska.” It’s a nice change in pace from the previous tracks.

Sandwiches
Featuring Hodgy Beats
I like the live version of this song a lot better, but at the end of the day, this’ll do. The song isn’t as hot as it could be, but lyrically it shows off the best of the group: “Those privileged fucks gotta learn that we ain’t taking no shit/Like Ellen Degeneres’ clitoris is playin with dick/I’m jealous as shit, cause I ain’t got no home meal to come to/So if you do, I’m throwin’ fingers up screaming FUCK YOU!” Hodgy Beats definitely came correct, but his lyrics might be a bit much for the religious hip-hop listeners. I don’t get how an ENTIRE song can be filled with references to satanism, forced abortions, and murder, but you can say your music isn’t horrorcore? Maybe Tyler just doesn’t like being categorized. This song is sick as hell though.

Fish/Boppin Bitch
This is another song about the girls, but it’s back to raping fantasy. The beat is very well done, but it’s all over the place as an actual track. Frank Ocean even comes in and sings a couple lines, sounding even more out of place in what was already a mess. This is a borderline SKIP to me.

Analog
Featuring Hodgy Beats
This song is more like an interlude for Hodgy Beats to rap on. I don’t really like the hook or Tyler’s contribution, but Hodgy’s verse is pretty hard and he fits the track pretty well. Regardless, this song is pretty forgettable.

Bitch Suck Dick
Featuring Jasper Dolphin & Taco Bennett
Seeing the title and the infamous Jasper & Taco combination of the Wolf Gang is a clear sign that this song isn’t to be taken seriously at all. It’s a completely different from the album; it sounds more like it belongs on Waka Flocka’s album than this one. At the end of the song, he kills both Taco and Jasper. This is definitely a SKIP.

Window
Featuring Domo Genesis, Mike G, Hodgy Beats, & Frank Ocean
The therapist introduces this posse track by announcing that he called his friends to the meeting to talk to him, hilariously saying he couldn’t find Taco and Jasper. Domo starts off, rapping about his smoking, his trademark. Mike G comes on rapping similar to Tyler with his stories about the Wolf Gang. Hodgy, rapping third, raps about females, while Frank Ocean raps as well, though not as well as the others. Tyler continues on with his personal look at his life, discussing failed house payments his mom was struggling through and dreams of paying bills for his family. Of course, at the end, Tyler takes a machine gun and murders everyone in the room. Everyone came correct on the track, good song.

Au79
This is just an instrumental. Nothing much to really say here, it’s a good beat.

Golden
This last track takes place after Tyler just killed all his friends. He raps about the stresses he still deals with as a rapper now, and the fact that several of the things he’s gone through he just won’t be able to get over. At the end of the album, the story comes full-circle, with the therapist revealing that he and all of Tyler’s friends are just figments of his imagination, and that he is actually Tyler. It’s a great way to end both the story and the album.

Bottom Line:
Overall, I still don’t really see all the hype behind OFWGKTA. When I first heard their material, I was very interested in hearing more from them; they sounded like a mixture between the Wu-Tang Clan and Eminem in my opinion. However, after 12 free mixtapes, this just sounds stale. I get the fact that Tyler has been through a lot of things in his childhood, but when you talk about killing and rape on every single song, it just gets boring and tedious. Why do you think Eminem gradually shifted out of his Slim Shady persona? It’s because, at the end of the day, you can’t just sound good on a track; if you rap on a track about satanism, rape and murder, put all that on your merchandise, and then at the same time say: “No, we don’t do this in real-life, and no, we’re no horrorcore. Stop calling us that,” I can only assume you’re doing it for shock value to get attention. For me, their 15 minutes was up after Earl, who is easily one of their best members, disappeared and they decided not to change up their material. I don’t care how big a fan of this group you are; anyone who says they’ll be listening to this ENTIRE ALBUM (yeah, that includes the Taco & Jasper song) and will be enjoying it about 6 months from now is LYING. About less than half of these songs are worth keeping, let’s be honest here. I’m probably gonna get slaughtered by fans for my review, but I think I’m being more than generous.