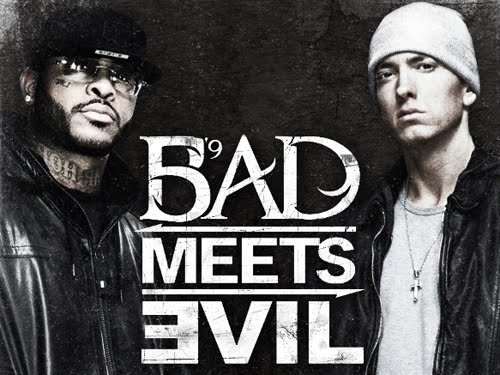 Forgive my recent absence from the Fro. But DJ LP is back (I know you’ve missed me Jerm) along with a LONG overdue Sound Session. Course when I do make my return the Fro’ is completely new, along with that I officially have my own column under Columns on the menu instead of the “MISC” on the old site (shout out to whoever did that).
Anyways since I’ve been gone for a while I’ll bring a double sound session in this spin.

I’ve done a Bad Meets Evil sound session before but when a good track surfaces then it must get attention. This leaked a while ago but it’s simply hard not to recognize the talent and chemistry (no homo) Royce and Eminem have on a track. It seems when they do get together in the booth that Real Hip Hop is present and that’s the case here. Both come with an interesting flow and lyrics as they prove why many of us are anticipating their collaboration album that’s due out soon.
DJ Khalil continues to give us magic behind the boards, being one of the most underrated producers in the game. I’m loving the beat on this one. Whoever put Liz Rodriguez on the track also must be applauded, I know Em has been singing his own hooks lately but it doesn’t hurt to get away from that (in this case and most cases I prefer it). It’s actually rumored that this track is unfinished and its suppose to feature a T.I. verse but who knows how that will go. I for one would be interested to see what the rest of Slaughterhouse does on a possible remix, knowing they aren’t strangers to a DJ Khalil beat.
Personally I don’t mind Royce doing tracks with Eminem on the side as long as he gets his work done with the rest of Slaughterhouse. I’m excited to see what comes of this project that’s in the works and waiting to hear the Slaughterhouse feature on the track also.

The second sound session I’m bringing in is a well known classic from top to bottom. The beat by itself is amazing. Don Cannon hit gold with having Outkast on the beat. If we are talking about lyrics then Andre 3000 comes out swinging with some material that speaks for itself on why he is one of the best lyrical rappers out there. It’s already Game Over at the beginning of the track as Andre goes in

“So I’m watchin’ her fine ass
Walk to my bedroom, and thought to myself
That’s the shape of things to come
She said, Why you in the club, you don’t make it precipitate?
You know, make it rain when you can make it thunderstorm
I’m like, Why?
The world needs sun
The hood needs funds
There’s a war going on and half the battle is guns
How dare I throw it on the floor
When people are poor
So I write like Edgar Allen to restore”

So please turn up the volume and enjoy as DJ LP brings you a double sound session of real hip hop as we listen to Bad Meets Evil & Outkast – “Echo” & “The Art of Storytellin’ Pt. 4”