What Tupac Shakur Meant to DuB 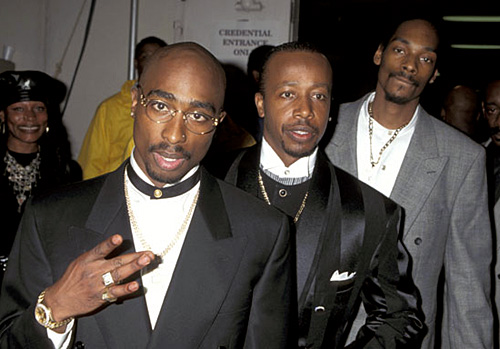 Being the Fro’s only West Coast representer, I knew it was only right that I tackle the importance that Tupac, his music, his poetry, and his life meant for me. I won’t pretend that I am as knowledgeable as some a P-Body, or a P From the D on the matter. That is not what this column is about. This is about the way this one man that I never met helped shape my childhood and may be the reason I am even on the Fro today.

In September of 1996 I remember my Mom picking me up from the local Boys and Girls Club. She worked at the airport and was scared to death to take the highway so she was normally running late. This time she was extremely late. It was fight night, Mike Tyson was scheduled to knock somebody out that night so the strip was extremely packed. She got to me around 5pm and we went out to eat and hung out for a few hours. By the time we got home the local news as well as the National News reported that Pac had been shot down. I remember the first report I saw said he was murdered, but was later corrected to shot. I was actually a fan of Will Smith, and had just discovered NaS, Snoop, and Jay-Z so I really didn’t know who Pac was. I asked my mom and all she said was “A Great Man”. That has always stayed with me. She didn’t say a rapper, a thug, or anything the media had tried to betray him as, but she said a great man.

The coming days were weird in my city. Normally Las Vegas doesn’t sleep, but it was as quiet as you will ever see it. The news had it reported that people were outside of the hospital to show their support, but it was bigger that that. People were going about their day and finding ways to try and uplift the Hip-Hop legend. People would say a prayer for him at dinner or just voice their support for him.I remember the day that it was announced he had passed away. My Mom got a phone call from her best friend crying. It was like he was apart of the family and she had to deliver the bad news. Needless to say that not only the Hip Hop world, but the world in its entirety were changed forever.

After Pac passed I actually began to do some research on him. It was pretty easy because BET and MTV were playing allot of his videos and talking about his career, plus the radio had nothing but 2Pac songs on. I remember the pride that Pac talked about when trying to express the power that Hip-Hop had. I remember 2Pac attempting to uncover the wrong doings and inequalities in the world through Hip-Hop. I also remember the young man who wanted to express his political views with the world. That political side of 2Pac inspired me to write a report on him for my 6th grade final assignment. I went to a private Christian School, and was the only black kid in my class. I remember turning in the paper with so much pride, and getting it back from the teacher as he gave me a look of disappointment. On the paper it said, “A rapper is not someone you should look up to or admire, Tupac backwards spells Caput for a reason”. I was a straight A student who never got anything lower than a B for any individual assignment. I was taken back when I saw he had failed me. It was then I decided that maybe my calling was to help destroy the negative image of Hip-Hop.

In High School, I remember rapping in cyphers, and battling friends all the time. As we got older we use to battle for money, and at times my homies would even pay me to ghostwrite. Although at this time Pac was no longer my favorite rapper his influence in my bars was evident. I took a creative writing class, thinking it would help my rhymes get to the next level, and instead of writing music, I began to write about it. I was able to explain Pac and his message along with other rappers. My senior year marked the 10th anniversary of the legend. I wrote a paper on him and my teacher advised me to stay with writing, especially about Hip-Hop. My life did sort of go in another direction. I enlisted into the Army and lived my life, but when I came to the Fro and saw the love other writers shared for the art I couldn’t help but ask for an opportunity to join the fam. King Jerm, and everyone welcomed me with open arms and I hope it is because they can see in me what I see in them.

Is Tupac the greatest rapper in my opinion? No, he is not the best lyricist, nor was his flow the most innovative. What Tupac was though was a leader. He led this new generation of rappers to think about the opportunities to uplift communities as well as themselves. Tupac Shakur is the first person that was able to have me fall in love with Hip-Hop. For that I will always respect him.