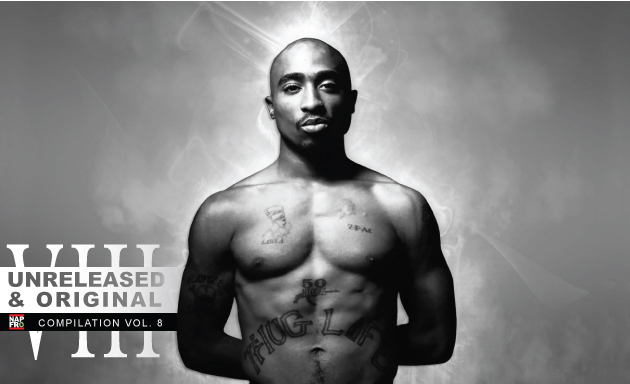 Before I start let me apologize for being late with this, a dude got a life. Plus I’ve been so busy with a lot of stuff but I did manage to squeeze in time to do this for the fans. So please enjoy and continue to support the site & Pac!
Here goes the next installment of the 2Pac series for those who weren’t old enough to remember Pac or never heard his music besides the remix bullshit they been putting out or just thought “Hit’Em Up” was the only song he made.
I made sure I put in the last unreleased song from One Nation which is called “Set It Off” on which Pac rapped third since everybody rapped about 4 to 6 bars each on the verse. I wish Pac would have had a longer verse though! I wish the One Nation Album would have got completed for the 97 released…Please stay tune in for Vol. 9 as well of more stuff.

I included the unreleased remix Johnny J did for “Until The End Of Time” which had to be made during Pac’s lifetime or a little bit after he died, not really sure. I know one thing for sure, it is fresh and one of my favorites. I probably like this one better than the original (which I love) with K-Ci & Jo Jo and the remix with RL.
Not to mention I went ahead and threw in the original “Thugz Mansion” with the unreleased unfinished verse he rapped on the second part. On “Breathin” original I included his unreleased 2nd verse as well for those who never heard this version. I love the Isley Brothers sample…once again you have to give Johnny J (RIP) his props on the beats, dude was a beast in his lifetime.
Those of you who had Thug Life Volume 1 CD remember “Bury Me A G?” Well I included the original solo version with 4 verses from Pac that never came out.
Also there is a 1992 version of “Changes” I put up and this sounds different from the 1998 version off of the Greatest Hits album. I forgot to put the original version of “Unconditional Love” but I guess I’ll do that next time. Its a little different including being uncensored. Something about the beat is a little different and certain stuff he says in the beginning is different. I guess that will go on the next one!
Check out “Everything They Owe” original (Produced by Johnny J). Pac is spitting on there. He may not be the most lyrical person but he can get deep with content & make you feel him. This version is way better than that bullshit remix on Until The End Of Time album… listen to that first verse on the remix and hear how off that shit is. That’s bad on Afeni & Suge part to release that song with it being off like that. Way Way Way Way off beat and very noticeable.
A visitor requested the original version of “Runnin” which was supposed to be on Thug Life so check it out in the tracklisting. On the next one I’ll put the other version of “Runnin” which was on One Million Strong with a different Pac verse. Em version is good but I love the One Million Strong version better out the 3 versions I have.
I included “Penitentiary Bound” (Unreleased Instrumental) [Produced By Johnny J]. I’m still waiting on the actual song to release really soon. So far I heard the Outlawz part and Prince Ital Joe (He does the hook on the actual song) but Pac verse hasn’t leaked yet.
I’m still waiting on the full CDQ of “Where U Been”, “Watch Ya Mouth”, “Penitentiary Bound”, “Ma Ma Ma”, “Put That Mash On”, “Animosity” and etc. to leak out. He’s the hardest working man in music period! Once again, I love the originals way better than the remix stuff they put out after his death from R U Still Down to Pac’s Life CDs.
RIP Pac, Stretch, Prince Ital Joe, Nate Dogg, Johnny J, and Kadafi.
Tracklisting:
1. Skandalousz (Demo) (feat. Nate Dogg) *Some of the instruments are different*
2. Breathin (Original Unreleased 2nd Verse)
3. Set It Off (Unreleased) (One Nation)
4. Everything They Owe (Original)
5. Penitentiary Bound (Unreleased Instrumental)
6. Until The End Of Time (Unreleased Johnny J Remix)
7. Never Call U Bitch Again (Original)
8. Never Be Peace (Original) (feat. Marvelous, Storm & Danny Boy)
9. Thugz Mansion (Original Unreleased 2nd Verse)
10. Fuck All Y’all (Original)
11. Thug Style (Original)
12. Bury Me A G (Original Solo Version)
13. Judgement Day (Original) (feat. Thug Life & Stretch)
14. Thug Life (Unreleased) (Dramacydal Solo with 2Pac talking)
15. Black Cotton (True Original) (feat. Mouse Man)
16. Fright Night (Original) (feat. Storm)
17. Runnin (Original) (feat. Dramacydal, Stretch & Notorious B.I.G.)
18. Changes (Original 1992 Version)
19. Dear Mama (Unreleased Unfinished Hook)
Download: 2Pac – Unreleased & Original (Compilation Vol. 8) [Mixtape]