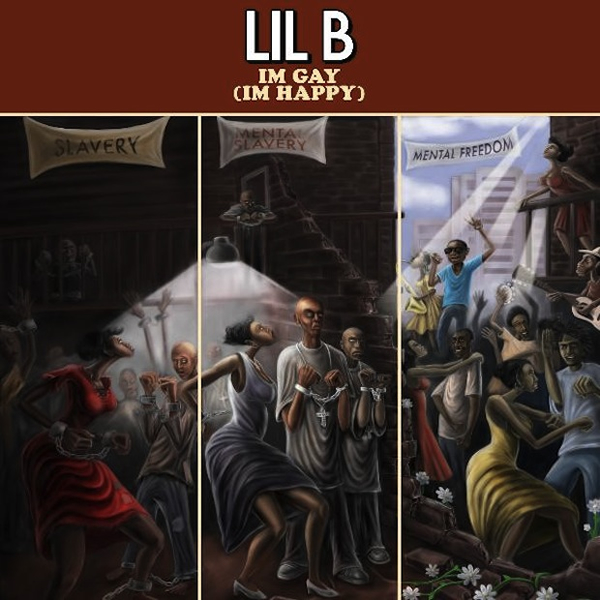 He’s been called many things: a pretty bitch, The BasedGod, and recently gay. With the title of his new album causing more controversy and publicity than his entire career has, Lil B definitely has a shot at success with this new album. It’s already gotten a personal co-sign and in-depth review from Lupe Fiasco (wow). But the question on everyone’s mind is, how do you go from making songs like “Look Like Jesus” and “Wonton Soup” to making actual music? And is the title more than just a gimmick? Well, let’s see what B has to offer.

Sidenote: I’m just going to say pause now so I don’t have to for the entire review. PAUSE.

Trapped in Prison
The beat comes in almost ominously and I didn’t really know what to think at first because its not what I’d expect to hear from Lil’ B. Then the lyrics started and up, and I’m shocked. Because they’re actually not terrible:

It’s more than Martin Luther King, fighting for a dream/Watch me go against everything that you believe/No disrespect trying to spark your dreams, everybody knows it’s easy to fail/But it’s harder to think, think twice/I’m nicer than grandma with a cup of ice tea.

Open Thunder Eternal Slumber
I don’t why exactly, but I’m kind of digging this beat; it sounds really atmospheric. I don’t really get the song though because it seems like B never stays on topic; he goes from rapping about not believing in Jesus cause he was white, getting raped by the system, and dealing with fame for almost three straight minutes touching on each topic briefly. He honestly sounds like he’s freestyling, especially with the stuttering and mumbling throughout the song. It’s an okay song if you don’t focus too much on what he’s actually saying.

Game
Produced by BigBoyTraks
This beat is very nice, but it sounds like a poor mans version of a Just Blaze/Don Cannon beat. This is most lyrical I’ve ever heard Lil’ B up to this point; he rides the beat decently well:

The song is pretty simple and he’s not really saying much again. But its the best I’ve heard thus far on the album.

Unchain Me
Produced by Clams Casino
I was skeptical about this beat at first, but I decided it’s hot as hell. However, Lil’ B really messed this song up. His voice doesn’t really go with this song and sticks out like a sore thumb. This is more of a laid-back kind of vibe track and he’s rapping very aggressively on it. Again, he tries to play social critic on here, but he comes off like an old man on the street corner trying to get attention. He doesn’t make any sense and is just mashing ideas together. SKIP.

Neva Stop Me
Produced by Talen Ted
I came to three realizations after this track was over:

Gon Be Okay
An Obama speech starts this one off with some soft piano sounds. Lil’ B comes on saying we made history, and its great we’ve come so far. The piano (Sampled from Joe Hisaishi’s “One Summer’s Day”) is beautiful on this track, but it’s just a constant loop with some violins thrown in for good measure. I can barely hear B’s lyrics because even though the song is EQ’d properly, the backing instrumental is so great it over powers his actually words. But at least from what I could tell his flow was on point. I’m so glad he didn’t ruin this track. In better hands this could’ve been great.

The Wilderness
Produced Rick Flame
I can’t really vibe with this beat, and it loops again and again. And Lil’ B never says anything interesting or enlightening, as usual:

I Hate Myself
Produced by Keyboard Kid
Looking at the length of this song being almost six minutes, I was hoping this wouldn’t be like the other songs on the album being straight freestyles. His flow is off on this track and the production is pretty bad too. SKIP!

Get It While It’s Good
Produced by Talen Ted
This song is terrible. SKIP.

I Seen That Light
Produced by BigBoyTraks
Lil’ B should thank BigBoyTraks for the production this song because it salvaged what little left of the album there is to salvage. Again, B isn’t saying anything on this track, but the production makes it decent enough.

My Last Chance
Produced by BigBoyTraks
At this point in the album, I’m not even going to bother talking about Lil’ B’s contributions on the songs, because he’s been using the same flow, same lyrical strings, and same topics. So only whether or not the production is decent enough is the deciding factor for the songs on this album. The production here is very well done, and it makes me wonder why B didn’t just get BigBoyTraks to do the whole album?

One Time (Remix)
Produced by Clams Casino
I never heard the original “One Time”, so I wouldn’t know whether or not this song is better than the original or not. The production is alright, but it sounds like a poor man’s version of “Go Crazy” by Young Jeezy. I’m just so happy I’m done at this point.

Bottom Line:
I think this album, despite the gigantic number of skips on the record, is a lot better than what we expected of Lil’ B. I mean this is probably his best material from a lyrical standpoint. But all of the songs on this album are poor at best and unlistenable at worst. All the Lil’ B fans are already calling this album classic, just pay them no mind. When you give your fans diarrhea, the moment you give them a solid turd, they’ll think it’s gold. Just let them have their moment, because at the end of the day, this album really is meant for them. This album did help me a lot though: This has been my first review at nappyafro.com in a long time, mainly because I became a rabid Charles Hamilton fan and didn’t want to listen to anything but CH. But Lil’ B is like a terrible version of CH, both musically and (coincidentally) in their personal lives as well. So this was the album I needed to kind of get over all that and get back to reviewing music. So thanks, Lil’ B. I still don’t like your album, though.