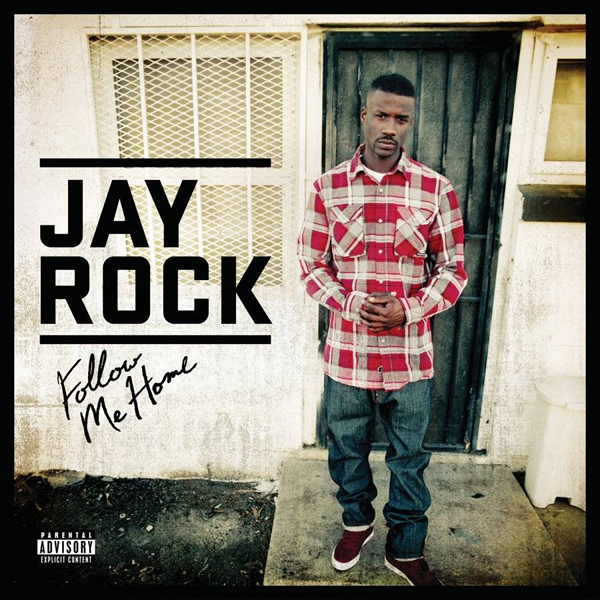 Jay Rock is a West Coast rapper who has been one of XXL’s Freshman, and one of the publications top 13 Most Street Emcee’s. He is apart of the Black Hippy group along with Kendrick Lamar, Schoolboy Q, and Ab-Soul. He is one of the new breed of West Coast Emcees who intend to take over the game. Lil B, Kendrick Lamar, and Tyler the Creator have all released albums not too long ago, and have gained some nice critical acclaim. Jay Rock is now releasing an album entitled Follow Me Home.

1. Intro (Skit)
Produced by Soundwave
The intro to the album starts off with a gang related drive by and follows up with a news reporter asking Jay Rock if he saw anything. Of course he denies witnessing anything, but also let’s us know that these types of crimes are no stranger to his environment. The intro really sets the rest of the album up for success.

2. Code Red
Produced by Phonix Beats
The intro to the album leads us perfectly into the first song of the album. This sounds like classic West Coast Hip-Hop. The beat instantly brought me back to the 90’s when the West was running the game. On this track Jay Rock speaks on his environment and the tragic things that are constantly present. He does a really good job from separating himself by identifying the issues without making it sound as though he condones these acts of violence and crime.

3. Bout That
Produced by Focus…
The lyrics on the next track are more aggressive than the prior. This go around he is talking about the things he has done to survive and the things that he is willing to do.

“I show no sympathy for no one, especially when I’m on one”.

The production is also much more aggressive.

4. No Joke
Featuring Ab-Soul; Produced by Willie B
The hood from the eyes of a hustler is the best way to explain this track. The production is laid back but the lyrics are extremely hostile. I actually put this song on repeat because the last verse is incredibly dope. Ab-Soul does a great job on the hook as well.

5. Hood Gone Love It
Featuring Kendrick Lamar; Produced by J.U.S.T.I.C.E. League
This song is one that I was really excited about because of the Kendrick Lamar feature. I’m going to give Kendrick his props, his versed demolished this instrumental. “You aint gotta like it, ’cause the hood goin to love it”. Jay isn’t worried about the commercial success. “Watch a young nigga show his ass out in public” speaks directly to this point.

6. Westside
Featuring Chris Brown; Produced by Tha Business
Man if Trey Songs isn’t available for a R&B collabo, I guess Chris is the guy to go get. I don’t like where this song is placed on the album. After you just suggest you aren’t trying to gain commercial success you do a song for the mainstream. The radio would keep this in rotation, but I wouldn’t.

7. Elbows
Produced by Phonix Beats
Another song that reminds me of classic West Coast Hip-Hop. This instrumental sounds like it would fit in perfectly with Dr. Dre’s 2001. This song is almost filler, but it is the perfect song to just ride around to. I can’t lie, this song has grown on me a lot.

8. Boomerang
Produced by Willie B
Skip!!! I really can’t stand this one. This is filler!!!!

9. All I Know Is
Produced by Willie B
Back to the aggressive music. The verses were nice, but at this point of the album I am hoping that Jay Rock shows off more diversity. “All I Know is: Guns, Drugs, Bitches, Money”; we already have an idea of who you are, but the ninth track should give us more.

10. I’m Thuggin’
Produced by Willie B
More of the same. The beat though reminds me of some old No Limit sounds with the horns in the background. Still he hasn’t spoken on much. “I don’t give a fuck like I’m castrated” was a tough line though.

11. Kill Or Be Killed
Featuring Tech N9ne & Krizz Kaliko; Produced by Willie B
This is the track I have been waiting for. This song speaks on the mind of young men stuck in a mind state that you have to keep the mentality that if you aren’t willing to killed you will meet your own demise. This is easily my favorite track off the album thus far. Tech Nine adds a nice verse on the end, yet Jay Rock shines a little brighter. The instrumental isn’t your typical West Coast sound, but it adds to the lyrics perfectly.

12. Just Like Me
Featuring J Black; Produced by Terrace Martin
This is another dope song. The beat has a great climatic sound. Reminiscent of Nas’ “One Mic” as this instrumental evolves and grows as each verse seems to mature. The story of this song is the idea of doing dirt (Gang banging & selling drugs) vs. the reality of it and the dangers that are very much real.

13. Say Wassup
Featuring Ab-Soul, Kendrick Lamar, & Schoolboy Q; Produced by Dae One
Black Hippy finally makes an appearance. The beat led me to believe something special was about to happen, but this was kind of lackluster.

14. They Be On It
Produced by Keith The Beast
Jay Rock has kind of reverted to the Money, Clothes, Hoes, Dope mentality, but after the last few tracks it feels like it can belong right here. The track is entreating and the production is good, but it isn’t saying much.

15. M.O.N.E.Y.
Featuring J. Black; Produced by Terrace Martin
When I saw the title of the track I assumed this would be a song about making paper. This track is more about the evils people commit for the love of money. This is highlight of the album. Jay Rock takes this hard based track and turns it into something really special.

“Why they say money is the root of evil, because when you got too much of it here comes the rude and evil”

16. Finest Hour
Featuring Rick Ross & BJ The Chicago Kid; Produced by J.U.S.T.I.C.E. League
This is a celebratory track. This is really about enjoying life as much as you can because it could all end at a moments notice. Ross is one of the best at flossing, so of course he is the perfect emcee to have featured on this song. He comes in and outshines Jay Rock.

17. Life’s A Gamble
Produced by Rob E
Here you find a Jay Rock that sounds paranoid. In the very first verse it sounds like he doesn’t trust a soul. The second verse sounds like he is scared of being caught with illegal narcotics, while the third verse is the reason why he is so paranoid. He is taking gambles to make money; Hustling.

18. All My Life
Featuring Lil’ Wayne & will.i.am; Produced by Cool & Dre
I wasn’t expecting this at all. This was released last year should’ve done better as a single. As dark as this album was at times it is weird to end it on such a happy note.

Bottom Line:
Jay Rock was courteous enough to take us to his home and I really enjoyed the trip. There were at times some stale moments in the way this album was presented. I think three songs in a row where you are just talking about how tough you are gets a little tiresome. But with songs like “Kill Or Be Killed”, and “Just Like Me”, the album shows Jay Rocks diversity. His voice has been compared to both Biggie and Shyne, to me he sounds a lot like Game. Not only that, but he is from California and is reppin the same thing. This may be Jay Rocks biggest hurdle to overcome. Still this is a solid album.