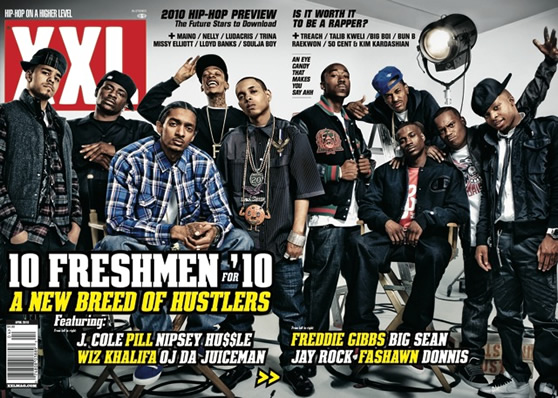 The cover to the XXL’s 10 Freshmen For ’10 April issue is finally hear. It seems like making the cover has become a big thing to the point where each rapper’s career will be look at even more and be compared their peers who also made the cover. Last year we threw some stats up for each Freshman, but this year XXL already has done a great job of that. You heard the freestyles, not read me and King Jerm’s thoughts.

PIll
Honestly, I think that P-I-Double-L has the potential to be the biggest star on this list (Yes, even over J. Cole). It’s funny; “Trap Goin’ Ham” may be his most notable song to date but if you listen to his mixtapes you now he’s is so much more. Now signed to Asylum, the world will see.
*King Jerm Says: If J. Cole wasn’t on the list, my vote would go to Pill. This is what Atlanta needs to rekindle that Outkast/Goodie Mob feel.

Wiz Khalifa
It took me a while to come around to Wiz but after his last few releases, a few tracks made it to my iPod. As far albums released, I think that he will take the same route as his homie Curren$y (Who made the list last year) and stay indie.
*King Jerm Says: I’m not going to sugarcoat this one, I can’t even roll with this one. Not my cup of tea at all.

Nipsey Hussle
People call him a new age Snoop Dogg. I say their wrong; he’s a new age Snoop who can rap better. Nipsey has talent and people thought enough to include him in the “We Are The World” remake…wait is that a good thing?
*King Jerm Says: This dude is reminds me of a mixture of Prodigy and Snoop.

Fashawn
I’m most happy for Fashawn to make this list. After releasing the slept on Boy Meets World, it’s good to see that the hard work paid off. He won’t kill ‘em with sales but he will with good music.
*King Jerm Says: Everyone has been talking about this guy like he is the reincarnation of Nas. Is that really a path you want to go down?

J. Cole
I’ve heard of J. Cole being describes as talented but boring. But when you listen to The Warm Up and remember he’s backed by Roc Nation, how can you not bet on this kid? I guess time will tell.
*King Jerm Says: My #1 Pick out of them all. Forget the Hov cosign, this dude can hold his own by his lonesome. AND he is from North Carolina!

Big Sean
G.O.O.D. Music’s young gun has the potential and steadily releases music that has him gaining popularity. But being with Kanye’s label, you can either end up as Common or Consequence.
*King Jerm Says: I liked his freestyle, reminds me of Ye, but the jury is still out on this guy.

Freddie Gibbs
As soon as I knew Pill was on this I knew Freddie Gibbs would be on the list. That’s not saying that Gangsta Gibbs doesn’t have talent. His mixtapes and cameos proves that he can make good music. Indiana stand up!
*King Jerm Says: I want Freddie to get shine, but not too much. If he goes mainstream he will never be the same. (see Pastor Troy and Master P for examples) His style is so RAW, and that is what I like about his music.

OJ Da Juiceman
Uh, the So Icey/Brick Squad affiliation has most of the world thinking that he may be the next Gucci Mane. But even Gucci has more talent that OJ. Hey, but maybe he can prove me wrong. Aye!
*King Jerm Says: New York has to got to be feeling real TIGHT about this. No NY freshman, but OJ is on the list? WOW.

Donnis
Donnis got a buzz of Diary Of An Atlanta Brave that lead him getting signed Atlantic. While he’s talented, the jury is still out for me. A lotta people would have rather seen XV or Yelawolf on this list instead. Time will tell if they were wrong.
*King Jerm Says: This guy does sound like a mixture of all the current rappers. I might start listening to this guy.

Jay Rock
I remember hearing about Jay Rock in 2006 but I guess since he hasn’t “broken through” he gets a position on this list. But hey, the kid can spit and I looking forward to seeing what the Watts native comes up with next.
*King Jerm Says: Haven’t heard his music..should I?