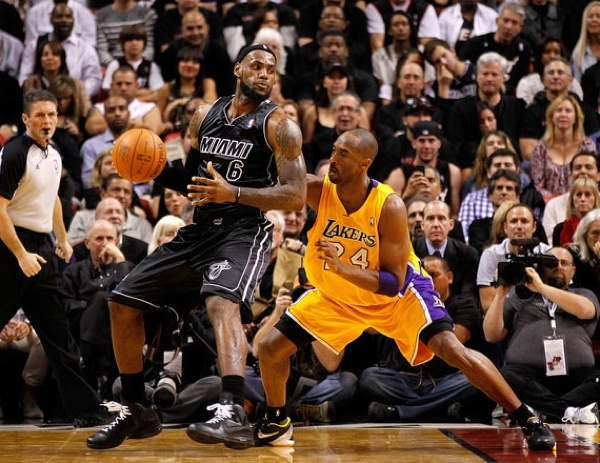 I initially wanted to do a post from the beginning of the season, and do a weekly post all surrounded by NBA action. Well that didn’t happen, because well life happens. Still, with the season approximately 50 percent of the way done, I think it is a great time to give y’all a small report on how each team is doing. With that being said, I will introduce you to 31 Flavorz, aka my Wife. This column was just as much her idea as mine.

Atlantic
• Boston Celtics
DuB: Boston is coming off of a year where the whole team dynamic was altered with the trade that sent Kendrick Perkins to OKC for nothing more than a talented player who doesn’t help with any of their needs (who they have lost for the season). Now so many teams have come out and are ready to play and Boston doesn’t seem like they can keep up. Grade: C
31 Flavorz: I’m still on the KG train, even though he looks old. I just can’t through in the towel yet. Grade: C
• New Jersey Nets
DuB: Name their starting five. Name 4 of their starters. Name 5 players on this team who would be covvetted by another team. This team is going nowhere (unless they pull off a trade for Dwight Howard). Grade :F
31 Flavorz: *Blank Stare*…… Grade: F
• New York Knicks
DuB: Although I am a fan of Jeremy Lin, and I aplaud the addition of J.R. Smith, this team has some serious issues. Some of it may be able to be fixed once Melo gets healthy. This team will be interesting once the entire team is at D’antoni’s use. Grade: C
31 Flavorz: Can’t wait to see Jeremy Lin and Carmelo play together, but so far they have sucked. Grade: F
• Philadelphia 76ers
DuB: I love this team. Although they don’t have a “Star” they fully believe they can beat anyone. They are deep and trust eachother. they won’t win much until they aquire or develop a great player, but I wouldn’t want to see them in the first round either. Grade B+
31 Flavorz: Andrea Iguidola can’t be a franchise player, he needs to go! Grade:C
• Toronto Raptors
DuB: I’m not a big fan of contracting NBA teams, but this one needs to go. They don’t defend or rebound and their offense sucks too. Grade: F
31 Flavorz: No Vince! why watch? Grade: F

Central
• Chicago Bulls
DuB: When I saw Derrick Rose was going to have a few games riding the pine, I thought they were going to be in trouble. They have gone out and won regardless of who they have had available. This is the one team in the East who may be able to challenge the Heat. Grade: A-
31 Flavorz: The Baby Bulls are showing glimpses of excitement and maturity. Grade: B+
• Cleveland Cavaliers
DuB: Kyrie Irving may be the best rookie, but being in Cleveland means he probably means he won’t win anything until he leaves. Grade: D-
31 Flavorz: No King James, no threat. Grade: F
• Detroit Pistons
DuB: The trade the Pistons made for Allen Iverson was the beginning of their downfall, and until they either get a legit team together they will only look like a JV team. Grade: F+
31 Flavorz: Who Cares? Grade: F
• Indiana Pacers
DuB: Picking up David West was a great move! With their depth and young guys developing, they may be one of the best teams in the East within two seasons. Grade: B
31 Flavorz: Good record, but I just don’t believe! Grade: C
• Milwaukee Bucks
DuB: Yawn Fest! Sometimes when you are a team that isn’t good, you can at least be considered on the cusp or exciting. Not these guys! If a player is getting traded to the Bucks, they will not be having fun for awhile. Grade F (No one fears the Deer)
31 Flavorz: Get the Buck out of here. Grade: F

Southeast
• Atlanta Hawks
DuB: Bad contracts can keep a team from getting better. The Hawks are a perfect example of this. Joe Johnson is a great player, but he makes more than D Wade and LeBron. This will keep them competitive, but they will never be a contender. Still with all of the injuries they find ways to win. Grade: B-
31 Flavorz: Josh Smith got game, but they can’t get rid of the injury bug. Grade:C
• Charlotte Bobcats
DuB: MJ, I love you, but you need to loose your job. This is the absolute worst roster in the NBA. Grade F-
31 Flavorz: Never been good! Grade: F
• Miami Heat
DuB: Although I have been a big LeBron critic, I have to admitt he has improved his game incredibly this year. This is my pick to win it all (if LeBron doesn’t shrink in the big moment). SW is a huge LBJ fan, but this team is finally as good as people thought they were last year. Grade: A+
31 Flavorz: Most overrated threesome to ever be assembled. Can they come through in the clutch? I don’t know. Regular season means nothing. Grade: B-
• Orlando Magic
DuB: Yeah there good, but until they figure out what happens with Dwight Howard, they can’t truly contend. Grade: C
31 Flavorz: Even with Dwight Howard having one foot out the door, they are a top team. Grade: C
• Washington Wizards
DuB: John Wall is the truth! The rest of this team are either old cats or young cats with only potential on their resume. Grade D-
31 Flavorz: Wizards with no Magic? A washed up MJ is still better than any player on this roster. Grade: F

Southwest
• Dallas Mavericks
DuB: The defending champs aren’t looking too invincible. Dirk looks old, Lamar looks confused, and without Tyson Chandler the middle looks wide open. Still I can’t count them out. Grade: C+
31 Flavorz: They ain’t what they were last year, but they working with what they got. Grade: B
• Houston Rockets
DuB: This team would be great if they had a player who could create his own shot, or create for others. Imagine OKC without Russel Westbrook and Kevin Durant. A great rebounding team with athletes, and hard hat players. Grade: C+
31 Flavorz: There rebuilding, but there winning. Grade C
• Memphis Grizzlies
DuB: I was worried that after last years surprise run they would fall off this year. It almost seemed like this was going to happen with all of the injuries, but surprisingly they have fought and stayed in striking distance of the playoffs so far. Rudy Gay is playing like an All star too. Grade: B+
31 Flavorz: Don’t watch them that much but their record deserves a decent grade. Grade C
• New Orleans Hornets
DuB: Chris Paul, my nigga gone! That is exactly what the fans of the Hornets are crying. This team is terrible at best. Grade: F
31 Flavorz: Paul gone so the Hornets lost their stinger, and give the commissioner the middle finger. Grade: F
• San Antonio Spurs
DuB: I hate how long the Spurs have been able to stay relevant in the West. Still I have to respect how well they are coached and the dedication their “Big 3” have. Grade: A-
31 Flavorz: Good veteran team, but I think by the end of the year they will be worn down. Grade: B-

Northwest
• Denver Nuggets
DuB: This is the West Coast version of the 76ers. They don’t really have a star player, but they do have a top ten player at every postion. Grade B
31 Flavorz: False Gold! Can’t win the gold or get close. Grade D+
• Minnesota Timberwolves
DuB: Ricky Rubio is one of my favorite rookies. Yes, Kyrie Irving is the best but Rubio is the most exciting. He and Kevin Love have this team in contention for a playoff spot. Grade: B+
31 Flavorz: Lets stay tuned! I Don’t watch this team.Still they don’t suck as bad as last year. Grade: B-
• Portland Trail Blazers
DuB: Lamarcus Aldridge is a beast, but imagine if the injuries didn’t happen to them. They would have the aforementioned Aldridge teamed up with Brandon Roy, and Greg Oden. That could be a championship team, but sadly enough it is not. If I could I would grade this team a U for unlucky. still they play hard and will probably make the playoffs. Grade: B
31 Flavorz: Too many injuries to give them more than a solid grade. Grade: C
• Oklahoma City Thunder
DuB: This is by all acounts the best team in the West. Still the fact that Russell Westbrook forgets about Durant at times scares me. He will have to grow as a player if they are to challenge the Heat for the title. Grade: A-
31 Flavorz: My boys right here, I’m hoping they win the West. Love watching them play. Grade A-
• Utah Jazz
DuB: They have shocked me and actually played welll so far. They are solid but not great. Grade: C
31 Flavorz: Are going to make it or not? Ain’t no Jazz in Utah! Grade: D-

Pacific
• Golden State Warriors
DuB: This roster is completely messed up. I don’t think that Ellis and Curry can play together at all. I hate to be the one to say this, but the Warriors really messed up letting Jeremy Lin go. If they kept Lin and traded Curry they could have corrected some of the rosters deficiancies. Grade: C-
31 Flavorz: Who do they have? Grade: F
• Los Angeles Clippers
DuB: If OKC doesn’t win the West, this team will. The addition of Chris Paul has done wonders for this team. This team has become very balanced and even with the loss of Chauncey Billups, this team is a real contender. Grade: A
31 Flavorz: I’m clip to Lobb city. Grade A-
• Los Angeles Lakers
DuB: How far the top dawg has fallen. The Lakers look old and tired. I don’t even know if Pau Gasol is a legitimate second option anymore. This team is on the downslope of their run. Grade: C-
31 Flavorz: Kobe is toxic, and before they move on they got to get rid of Kobe’s wack ass. Grade: D-
DuB Sideline- she is the biggest Laker hater I have ever met. She is still sour that in 01 AI got his ass kicked by the Lakers.
• Phoenix Suns
DuB: Please trade Steve Nash. This team is going nowhere fast, and Nash could possibly win somewhere else. Grade D
31 Flavorz: Having the best passing point guard who doesn’t work when he doesn’t have any one to pass it to. Grade: D
• Sacramento Kings
DuB: Plenty of young talent, but no real balance. They need some savvy veterans before they take the next step. Grade: C
31 Flavorz: Cant wait to see this team win again. Grade: D

Sidenote: These niggas keep talking NBA on the FROCAST when DuB obviously knows the NBA better than anyone else in Fro Nation.