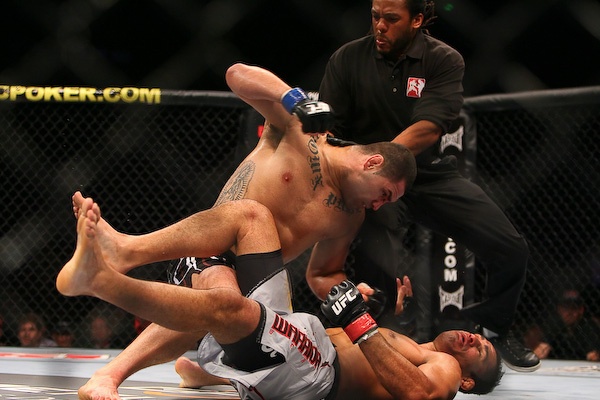 According to Lorenzo Fertitta, the next opponent for former champ Frank Mir is Cain Velasquez. This is a great match up that will possibly decide who will fight for the heavyweight championship after Junior Dos Santos and Alistair square off. I see this fight remaining on the feet. Well at least Cain will remain in his feet. I say this because even if Mir intends to grapple at any point, Cain will not enter his guard. In the case that Frank does pull guard, I think Velasquez will drop bombs similar to how he did against Rothwell and Kongo. Cain will return to his roots in which he takes his opponent to the ground and attacks while remaining in a standing position. He threw Rothwell around like a rag doll like this.

Frank Mir is extremely dangerous on the ground, especially on his back. He is the first person to ever submit Antonio Nogeuira and he did it in disgusting fashion. I will never forget the look on Big Nog’s face as he looked at his mangled arm as if it weren’t his own. For this reason I wouldn’t be surprised if Cain backed away if Frank pulls guard. With Cain being the best wrestler in the division, he should be able to control Frank on the ground. Regardless, Mir is too skilled in jiu-jitsu to take that risk. Simply put, if Frank can submit Big Nog, he can submit Cain.

With his elite wrestling skills, Cain has the ability to keep this fight standing and I think he will. Although Velasquez was finished by technical knock out by the new champion, Junior Dos Santos, I don’t think any less of Cain’s stand up ability. That fight was a ‘toss up’ and the chances of that punch landing were the same. Cain has the advantage on the feet but I won’t discount Mir’s chances. Mir has some amazing knock outs on his resume.

I think Cain might have the speed to out point him and possibly finish him but I’m expecting a close fight.