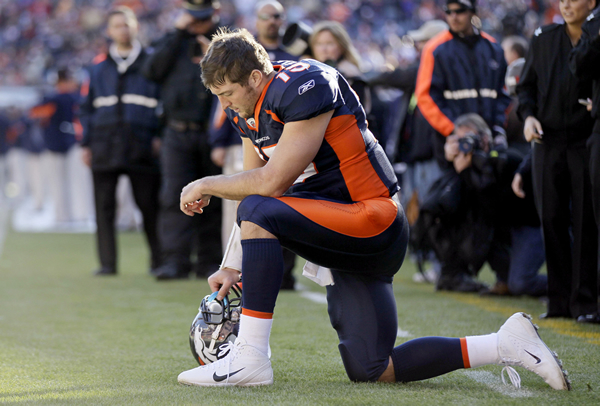 Tebowmania took the sporting world over (Helped by ESPN) winning 7 of his 11 starts 6 being comeback wins and led the Denver Broncos to the post season. Still what were glossed over by his fairytale season are decisions to come for the Broncos. Theses upcoming weeks will determine the true intent of what V.P. of Football of Operations and head coach John Fox have for this offense.

After leading the team to the playoffs Elway said Tim Tebow has earned the starting job going into training camp. What Elway said was all well in good but adjusting the personnel is just as about important as an endorsement from the front office. Coming in from Florida and now in the NFL no one was questioning his intangibles or heart or dedication, the problem was how he would transition from a spread offense to a pro-style offense. Half of the argument was correct as more as more elements from college offenses are being integrated to the pros. For example in 2011 40.9% of all offensive snaps were in the shotgun compared to 37.6% in 2010 and a surprising 19.5% five years ago. As with the continuing evolution of football that alone will help but a fill commitment to Tebow the Broncos will have to do what every other team has to.

First, you have to look to the Broncos saying, is Tim their quarterback and do you believe he can lead you to and win a Super Bowl because if he can then you have to put him in a position to succeed. How you go by doing that is you have to put the type of personnel around him that maximizes his talents. In his first four start with the Broncos using a base 21 or 12 personnel (21=2 running backs 1 tight end, 12= 1 running back and 2 tight ends) he completed 45% of his passes and threw for 131 YPG; extremely pedestrian numbers. He struggled and so goes Tebow so went there offense as the mainstays of the spread like the zone read, option, and bootlegs weren’t used as John Fox chose to stick with what he knew. After, those four games offensive coordinator Mike McCoy scrapped what he began using more spread sets with 11 personnel (1 running back, 1 tight end) and 10 personnel (1 running back, no tight end) with these parts on the field Tebow thrived compared to how he did before in completing 48% of his passes and 165 YPG (Still his numbers are bad but he had nowhere to go but up). 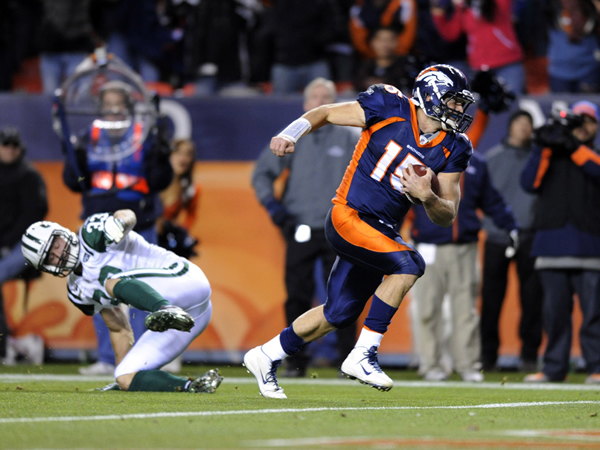 Next, you have to revamp the offense first by overhauling the personnel. Tom Brady can’t run the Packers offense with his personnel and likewise Aaron Rodgers can’t with the Patriots. To run the offense Tebow ran at Florida, Denver would have to draft the same type of multi-purpose athletes Florida had when Tebow was there. Since Denver doesn’t have the Pouncey twins they would have to draft at least three more linemen to go with tackles Ryan Clady & Orlando Franklin.

Do I think Tim Tebow is the future of the Denver Broncos? No, besides all the mechanical issues and him struggling to drop back from under center and handing the ball off, and understanding simple progression, what I’ve seen time and time again in the NFL, college, and high school whatever new coach comes in he is going to want his type of players because he would rather lose with his guys rather than someone else’s. The ideal situation and reality for a head coach you are married to your guy. Examples: Rex Ryan & Mark Sanchez, Mike Smith & Matt Ryan, John Harbaugh & Joe Flacco, and Aaron Rodgers & Mike McCarthy. These are examples of what you want to get to a Super Bowl. The other side of the coin though is that you could have a shotgun wedding with the two always never works out and usually gets pretty ugly by then the team will choose who they want more or get rid of both. Examples of this are Josh McDaniels & Jay Cutler, Ken Whisenhut & Matt Leinart, Jack Del Rio & Blaine Gabbert, and the worst case Jeff Fischer & Vince Young. Besides that situation any G.M. or in this case John Elway who doesn’t believe in Tim Tebow as a long term starter.

However, there is still hope someone else in the NFL sees something that they believe they can mold. For example new Jaguars owner Shahid Khan said that if he had bought the team earlier, he would have hired someone to make sure they drafted Tim Tebow.