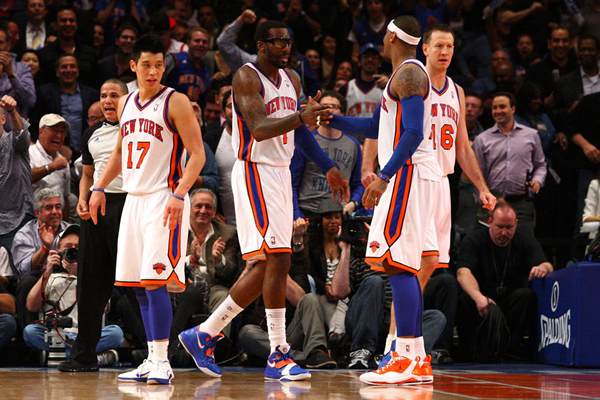 Ever since the New York Knicks got rid of coach Mike D’Antoni, they seemed to have righted the ship. The Interm Coach, Mike Woodson (who will probably become the long-term coach unless Phil Jackson has legitimate interest in coaching the Knicks) has them playing hard, and playing defense. Still, even with a 6-1 record since the coaching change, the Knicks are still in serious trouble.

It seems like the Knicks should be one of the best teams in the East, if not the entire league. You have one of the best players in the NBA in Carmelo Anthony, and he has a scoring machine frontline partner in Amare Stoudemire. Around them you have a great defensive center in Tyson Chandler, who is oft credited as the man who helped Dallas attain a backbone, and great guards in Ian Shumpert, J.R. Smith, Landry Fields, Baron Davis, and of course Jeremy Lyn. The bench for the Knicks have three of those guards coming off of it, and a collection of smart forwards who defend, and can play multiple positions. Talent wise there should only be three teams that can compete with them, The Heat, The Lakers, and The Thunder. So what’s wrong with the Knicks?

Some would say it’s their point guard play. Yes, Jeremy Lin has come back to reality after his initial record breaking performance, but that should have been expected. Remember, he was doing the brunt of his damage without the teams two best players. If you are a point guard and you are forced to take 25 shots a game to keep your team competitive then you need more help. Once you get said help, your shots should be reduced, that’s just smart play. Lin’s biggest weakness is how turnover prone he is. It doesn’t bother me though, at least not as much as the Knicks biggest issues. 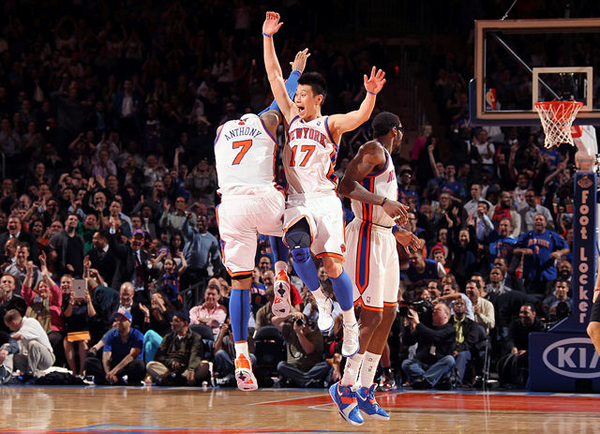 The Knicks biggest issues are it’s “Stars”. I love both Amare Stoudemire and Carmelo Anthony, but for me not to be honest after being critical of players like LeBron James would be completely irresponsible as a writer. Both of these guys are super talented, but I’m starting to wonder if they have the leadership quality they need to be a teams Alpha dogs. Both Melo, and Amare have been to the Western Conference Finals, and come close to getting to the finals. Melo with the Nuggets, and Amare with the Suns. Both had great point guards, Chauncey Billups, and Steve Nash, but more importantly these two were leaders.

Chauncey Billups was traded to the Denver Nuggets from Detroit for Allen Iverson. He was traded to Denver not because he was a more talented player than AI, but because the Nuggets, as talented as they were, needed a leader in that locker room. After he was acqired the Nuggets shocked everyone and eventually lost to the Champions in the Western Conference finals.

Steve Nash was picked up in free agency by the Phoenix Suns, in hopes that he would be a nice complementary piece for the Suns’ young talent. Funny enough, he had two back to back MVP seasons, something that even Phoenix didn’t expect. With Nash as his floor general Amare Stoudemire had maybe his best years as a pro averaging about 26 ppg and 8 rpg.

Still what Melo and Stat are missing seems to be the desire. This is maybe the best oppurtunity these two have ever had. The roster around them should allow for them to be more successful. Yet, when the offense isn’t going well they seem to disapear. They become uninterested. They just become bodies on the court.

The greats are able to get their team out of those funks. Look at what Chris Paul has done for the Clippers this year. If you watch a game when Lob City is struggling, Chris Paul’s hustle intesifies. He gets his team out of those slumps because he wants to win.

Does Melo or Amare have that quality? I don’t know! If they can get to the post season they will have a chance to prove it. Last time the league had a shortened season the Knicks were able to make it to the NBA Finals. Trust me no one wants to see the Knicks in the Playoffs, not even The Heat.

Melo and Amare are better than what they have shown this season. They wanted to show people what they can do, that was the whole reason for going to New York, well we are waiting.