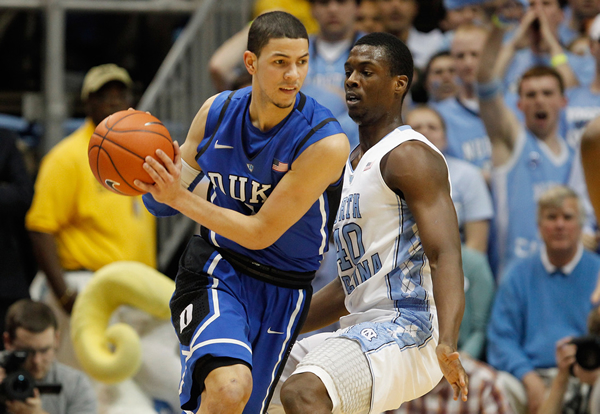 The NCAA tournament is over. The Kentucky Wildcats won. I won the Tourney Challenge. I am not one to brag but I just wanted to announce it again. I also have the biggest sports brain on the website. I go to sleep to SportsCenter. I wake up to SportsCenter and I listen to ESPN radio in the car. I wonder what Travis Best is doing nowadays? But now the tournament is over I am going to give the 5 most hyped players entering this year’s draft. All these players are not top 10 picks but they do not belong in the NBA draft altogether. Once they enter the league they will just get lost in the shuffle like Josh Selby. Let us start this list, people.

Harrison Barnes was a top college recruit from Iowa though. I mean who was his competition? Wrestling players that did not make the team? There was no color in that above video if you know what I mean. Barnes is too timid. He has some talent but does not demand the ball from the players around him. You cannot change a player’s personality. He has not had that moment where spectators say “that was an NBA move”. He can’t create his own shot. The college swingmen before him could and still do. You know them as Melo and the Durantula. Well, that is if you are cool.

This kid has had his NBA move moments. You see it there above. His father is a former NBA All-Star (Okay, just once.) and current Boston Celtics coach. I just do not see little Rivers being a star player in the NBA. I said the same about Stephen Curry. I would not bet on me being wrong twice though. I think I have a better chance of being right this time since Rivers attended Duke University. Rivers cannot make free throws either. That is a problem if you are going to drive to the basket. Rajon Rondo cannot make free throws but he can give you twenty assists on any given night. Rivers is a streaky shooter and I see his streak ending with Duke.

Lillard is just trying to get in while the getting is good. He was the leading scorer in the NCAA most of the season. (He was beat out by Reggie Hamilton from Oakland University at end of season.) All of his highlights are against teams like Southern Utah and Sacramento State. He became invisible against California. He had 14 points but that was while shooting 4 for 17 from the field. Height is always major in the NBA and he does not have it. His card says he is 6’2” but we all know you can lie about just like on your driver’s license. The best case scenario for him he will be a smaller Marcus Thornton off the bench. It probably will not happen though.

He might have the height to be a solid center but he does not have the strength. If he had Dejuan Blair’s toughness, he would be a top prospect. He shies away from contact. It is not as bad as Blaine Gabbert but he still gets out positioned on both sides of the ball. This will not make it good for him in the NBA.

Yes, he can block a shot or two with his 7’4” wingspan. But he is thin and needs to eat a Clif bar. I know they said the same about Kevin Durant but he does not have half of Durant’s range. Henson does not have a face up game and cannot make a free throw. That is a problem for most big men but they are not as fragile. (i.e. Dwight Howard) Howard is just fragile emotionally not physically. Henson has to develop an outside shot unless he will become Daniel Orton.

Conclusion:
I did not plan that 4 out of 5 be Duke and UNC players. That is just the thoughts that came up. I am sorry to all Blue Devils and Tar Heel fans. You know that your team does not produce good pro players. That is what John Calipari does. Roy Williams and Coach K just make nice guys with no personality.