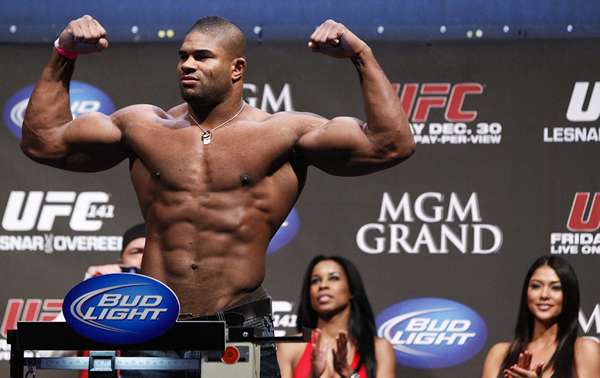 Creating the second highly anticipated Nevada State Athletic Commission hearing this year, Alistair Overeem failed his random urine test with a testosterone to epitestosterone ratio 14 times that of a healthy adult male. His ratio, 14:1, is absurdly out of proportion with the average man’s 1:1 ratio. Athletes are given a leeway of 6:1 in Nevada and 4:1 in most other states, ratios at which Overeem practically and Chael Sonnen literally scoff at. Kid Nate from Bloody Elbow gives a great explanation of the relationship between testosterone and epitestosterone and how it relates to steroid abuse:

Epitestosterone is an inactive analogue to testosterone that is produced in the testes simultaneously with testosterone, but critically is not impacted by exogenous administrations of testosterone. That is, when you’re juicing you just add T but not E.

Overeem’s testosterone level is three points less than Sonnen’s was when he failed a urine test in 2010, and Sonnen is fighting for the middleweight championship this summer. Therefore, Overeem’s longterm future isn’t necessarily in jeopardy. It’s the near future that’s at risk. He was supposed to challenge the heavyweight champion Junior Dos Santos in one of the most anticipated matches in the history of the sport. That will be put on hold until his hearing on April 24th, 2012. The biggest victims in this situation are the fans who possibly have been robbed of one of the greatest features of striking the sport has produced.

Those who have accused Overeem of steroid use over the last several years can finally say “I told you so” as his absurdly high ratio essentially confirms their allegations.

According to Bleacher Report, Overeem has now filed for a license to compete. This is significant because he could be denied and therefore suspended for a year from competition if they deem his excuse to be insufficient. The fact that he filed an application possibly means that he’s confident in the excuse he’ll present on April 24th. 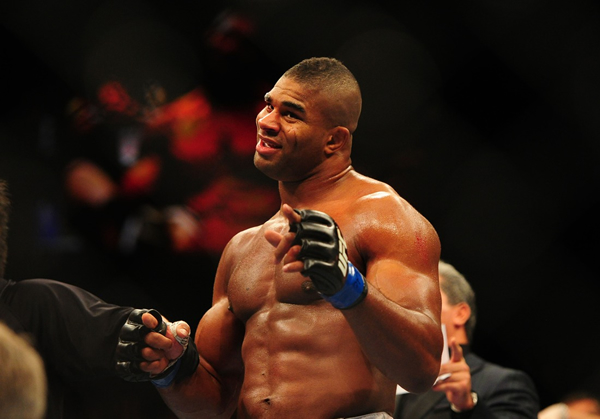 This unfortunate situation throws the heavyweight division and UFC 146 into temporary disarray as everyone speculates who will challenge the champion on May 26th in Las Vegas. The most obvious pick would be Frank Mir who’s on a three fight win streak. But UFC President, Dana White, squashed that idea when he stated that the Mir versus Velasquez fight, the co-main event, will remain intact. That leaves Werdum and several other fighters who are undeserving of a title fight. Werdum is the most likely of the bunch because of his six wins out of his last 8 fights, his two most recent losses ironically were against Dos Santos, and Overeem. While it’s not the most ideal situation for a championship defense, it may be the most plausible.

Another possibility that has been suggested by fans and journalists alike is the prospect of Dan Henderson facing Dos Santos. Henderson has been in line for either the middleweight or the light-heavyweight titles which has forced him to the sidelines for several months after his exhilarating match against former champion Mauricio Rua. He’s 41 years old and is most likely a few fights away from retirement, which is why he’s waiting for a championship opportunity.

One may wonder how a 41 year old fighter can compete with current top level athletes. His use of Testosterone Replacement Therapy is the most likely reason and the legality of its use in sports is a topic for another day.

Despite his age and his lack of a resume in the heavyweight division, Henderson has become one of the most popular picks to challenge the number one heavyweight, along with Werdum and, laughably, Fedor (don’t even start). But someone even more laughable, regarding merit, has been nominated for a shot at gold. Mark Hunt, after his reentrance into the UFC with a legal technicality, built some momentum leading to his technical knock out of Cheick Kongo in just over two minutes at UFC 144. While a great finishing win over a kick boxer such as Kongo is respectable, he’s still two or three top ten wins away from the privilege of confronting a champion. This would be a true underdog story if Hunt were to enter the ring with the young champ. It most likely would also be a career ending story since the most likely result would be a lopsided demolition of the veteran.

Although all avenues seem to have been explored, there’s always the chance of the unexpected. Overeem may have a justifiable reason for his testosterone ratio being so high. There’s the possibility that his B sample of urine will test negative but as of now, he hasn’t requested it to be tested. Maybe he will use Sonnen’s route and claim to be utilizing TRT and to have failed to file the proper paperwork. We’ll find out on April 24th at his NSAC hearing.