As If Hip-Hop Pioneered Misogyny 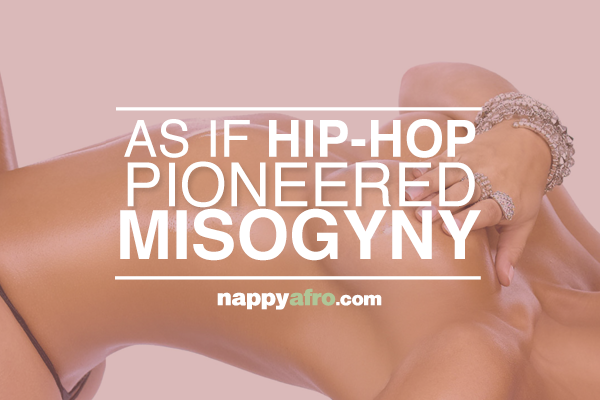 To understand the present, we need to know how we got here – so excuse the long text.

“I love rap music… I love it. But I’m tired of defending it”

Sounds familiar? No, I’m not talking about Chris Rock on this one. This is something of a more sinister nature. For far too long has rap music taken the fall for a number of society’s problems. Violence, drug-dealing, drug abuse, prostitution, pimping, misogyny, materialism and the list may go on. I’m not going to talk about all these – well, maybe I will but one at a time.

Short history lesson: Misogyny can be traced all the way back to ancient Greece with the myth of Pandora, the first woman, who opened a mysterious urn out of curiosity and unleashed all the evils unto the world. Now, with this myth comes an assumption that before the creation of women, humans already existed as a peaceful bunch who served as the gods’ companions. By presenting the first woman in this light, the Greeks created the woman as an antithesis to the male (thesis), who needed to be controlled and subdued, forming a dualistic philosophical foundation for our views on reality in which a woman (like Pandora) is held responsible for the ills of the world. Greek misogyny, is therefore based on the fear of what a woman might do if she is allowed to, hence the need to subdue this creature.

Then ancient Rome. A Roman woman in ancient Rome was expected to be educated just enough for her to understand her husband’s opinions and orders. Anything more than this was off-putting and dangerous and a woman would sometimes have to go lengths to mask or hide her intelligence or cleverness. Roman men would be terribly embarrassed by women more educated and clever than themselves (sounds familiar?). Decimus Iuvenalis, a Roman poet better known as Juvenal wrote this:

Really annoying is the woman who, as soon as she takes her place on the dining couch, praises Virgil excuses Dido’s suicide, compares and ranks in critical order the various poets and weighs Virgil and Homer on a pair of scales. Grammar teachers surrender, professors of rhetoric are defeated, the entire group of guests is silent; neither a lawyer nor an auctioneer nor even another woman will get a word in. So loud and shrill are her words that you might think pots were being banged together and bells were being rung… Like a philosopher she defines ethics. If she wants to appear so learned and eloquent, she should shorten her tunic to mid-calf (the attire for men at the time)!

This satirical poem goes on, but this should suffice for the sake of argument. Juvenal, in this piece, in essence emphasizes that such behavior is manly and that such a woman is unnatural and unwomanly. To put it plain and simple: the average Roman man likes his women pretty and dumb(er than him).

Moving on to religion. In the Jewish religion (a story which is also adopted in Christianity) God created the first man Adam, an autonomous man who lived a happy life in divine communion in the Garden of Eden before the creation of Eve, who was created from Adam’s rib because God thought he needed a companion. Shortly after the creation of Eve, she is tempted by a Serpent to eat a forbidden fruit which she also fed to Adam. This resulted in the Fall of Man and all the evil and pain and catastrophe and death being ‘released’. All this, seemingly because of the creation of this creature who was duped by a serpent and ‘dragged’ her companion with her. Just like the case of Pandora, the woman is seen to be at fault, having been introduced and having destroyed the balance present before her in the peaceful status quo.

These views can be followed all the way to the contemporary world. Take a look at the 1960’s ads for a number of products in America that includes, but not limited to, the Hoover company’s vacuums, Van Heusen ties, Kellogg’s pep vitamins, Drummond sweaters, Palmolive soaps, Lysol and so many more (google ‘horribly sexist vintage ads’).

Now, what does all this have to do with anything you ask? It has everything to do with it. Everything. From ancient philosophical foundations of a dualistic view of reality which viewed women as the ‘others’, as creatures that unleashed untold evils unto the world, to the idea that women had to be simple-minded to be ‘womanly’ and everything in between that. Millennia of having such views perpetrated surely helps cement an idea into modern society at an almost subconscious level that women are ‘inferior’. And not just into rap music but society in general. All of these misogynistic practices predate the existence of Hip-Hop music, by far.

So why is misogyny today almost completely attributed to rap music? It makes as much sense as saying that it rained because you got wet. Effects do not precede causes. People constantly point out the ‘powerful’ influence of Hip-Hop on culture and have therefore further supported this view that Hip-Hop is the perpetrator of these misogynistic values and ideals in our society. We see misogyny in our culture as a reflection of the values perpetrated in rap music as if rap music is a phenomenon that occurs independently of socio-economic, political and social factors that shape our societies. We got it all misconstrued. What we should look at is how the social values in our culture shape us, our views on things (women in this case) and music in general, not just rap music. Now, am I defending misogyny in Hip-Hop? No, or to put it in scientific terms: Hell no! Perpetrators of these values in Hip-Hop should be held accountable for their misogyny, but so should everyone that perpetrates and corroborates them.

Misogyny is a product of millennia of objectification and denigration of women, and NOT decades of Hip-Hop music. The music just reflects these values.