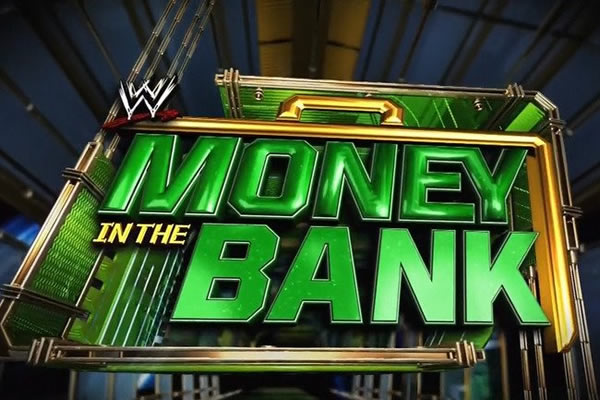 The Royal Rumble is probably my favorite pay-per-view because at the end of the night it has a definite challenger for title (via the Royal Rumble winner). I guess that’s the reason I like the Money In The Bank pay-per-view; at the end of the night you get two definite challengers for title. But now that I think about, it maybe the time after the Money In The Bank (MITB) pay-per-view that has the excitement; the cash in.

Either way, the 2012 Money In The Bank pay-per-view could be pretty exciting. CM Punk vs. Daniel Bryan, a MITB match with only former WWE champions (Also Cena’s first MITB), another MITB match with a new upcoming stars, plus more. And of course the homie Saule Wright (The other resident wrestling fan on the staff) is here with me to breakdown what went down with the 2012 Money In The Bank pay-per-view. – B-Easy 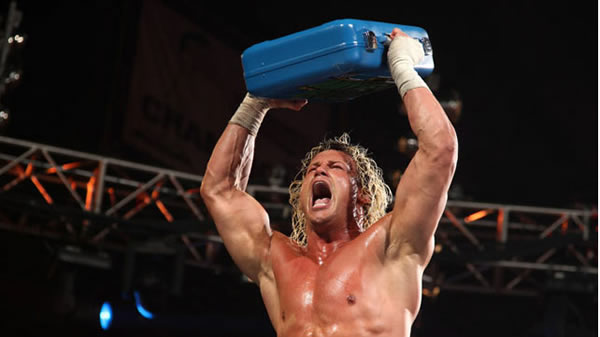 B-Easy: There were a few missed spots here, but it got much better towards the end even though it didn’t have as many big moments like past MITB matches (I think it’s a new rule to that Sin Cara gets powerbomb’d through a ladder every Money In The Bank PPV). I said before this match that the only people I would accept winning is Cody Rhodes or Dolph Ziggler. Dolph won so I’m cool with this (And looking at the crowd, they were to).

Saule Wright: Snore. I’m all for new talent, but Sandow and Tensai being in this match made no damn sense. I root for everyone else…well, except Sin Cara who is a botchfest waiting to happen. It’s not his fault, he ends up having to wait for the slower guys in WWE to keep up. I’m just over him too, save him for the little kids though, just get him off my TV. Ziggler is the shit and needs the belt, the end. WWE gets it right for once. 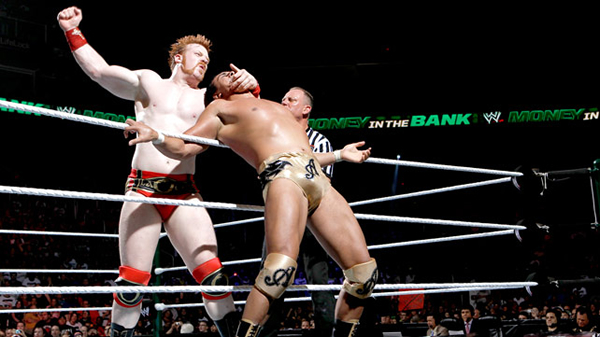 B-Easy: Who got more cars than Birdman & Jay Leno combined? Alberto Del Rio. And that’s one of the reasons I wanted him to win tonight. The other reason is that I just thought it was time for a change… or maybe Sheamus would win and Dolph Ziggler would cash in quick like Kane did in 2010. As for the match, to me it felt like we’ve seen Del Rio & Sheamus wrestle so many times it wasn’t really special. Not a bad match though with Del Rio being the aggressor. A Brogue Kick from Sheamus continues his 100+ day reign as World Champion.

But wait…Ziggler actually did come down to the ring to cash in the briefcase but with some interference by Del Rio, Ricardo, & a Brogue Kick, he didn’t get to technically cash in.

Saule Wright: Snore. Sheamus is a boring ass champ. Trips is keeping his boy on top, but he’s a better heel and he’s better without the belt. PLUS I’m tired of ADR jobbing much like I’m tired of Ziggler jobbing…including post match with the briefcase. smh 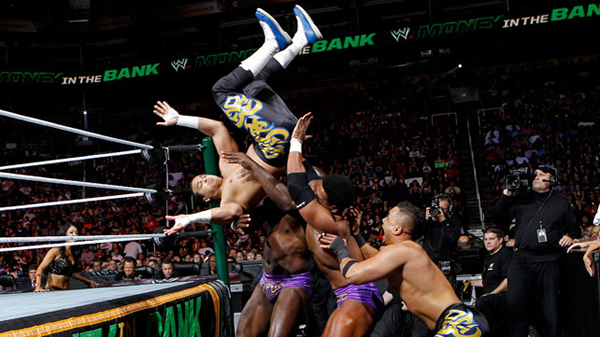 B-Easy: I hate when WWE throws in unannounced matches at PPV’s; it feels like a Monday Night Raw move. Plus, why have a Tag Team Championship match on YouTube for free on the preshow and have this one on the actual Money In The Bank pay-per-view. I took a bathroom break for most of this one but I did see A.W. pick Darren Young’s afro (He also made a racist joke involving Taco bell that I hate to admit that I laughed at). Primo & Epico surprisingly win.

Saule Wright: The crowd laughed at that joke too…smh. I’ve stated how I feel about Cryme Time 2.0 on the FROCAST. Oddly enough, Primo and Epico are probably the best tag team they have…just have no mouthpiece and that fake ass Diva they bring with them is horrible. They’re trying to build the division back up so I’m waiting to see what ends up shaking out. 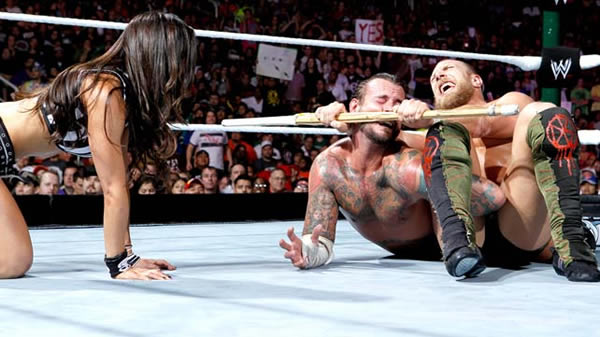 B-Easy: This is the third pay-per-view straight where CM Punk & Daniel Bryan were involved in the co-main event. I say that not to complain, but who would have thought these two would be headlining in the WWE like this right? A no DQ stipulation was added on Sunday but I thought the match already was no DQ. In the beginning this match reminded me of the one at Over The Limit but they did more stuff with weapons and of course the addition of AJ as guest referee. This match was more about storytelling and on that side they delivered. It may be time to move on from this storyline though. CM Punk won and continues his massive 239 day reign as WWE Champ. I see him and Cena meeting at Summerslam. Maybe

Saule Wright: As MUCH as I enjoy this feud, I’m in the minority with AJ adding anything to it. I’m not entertained. It’s gone on too long and hopefully they are done with that whole thing. I’d like to see them do a ironman match or Hell in the Cell or something vintage. They could work an hour like the old days…probably 2 of like 5 on a 75 man roster that can do that. 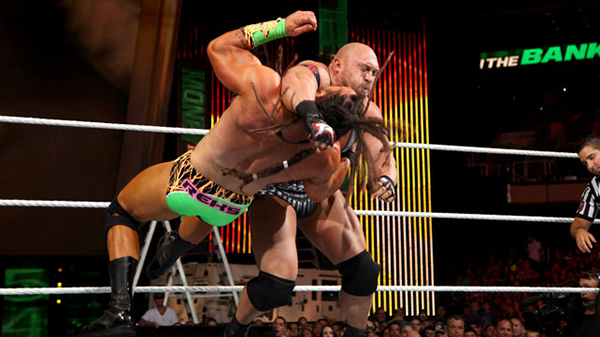 B-Easy: A Ryback sighting? A Curt Hawkins & Tyler Reks sighting on a pay-per-view? You’d think this would be a quick match but Hawkins & Reks actually contolled most of the match. Goldberg wouldn’t have let that shit happen (Speaking of which, it seems the Goldberg chants weren’t as bad this time; more “Feed Me More” chants though). Ryback won. Of course. Now put him up aginst some real compitention.

Saule Wright: WTF is the endgame for Ryback? Are we really going to have him rewrite the books for winstreak (and I can see Vince doing that because he owns WCW shit too, and yes, he’s that fucking petty) only to have him win the title and then drop it? Does he face Lesnar at the next Mania? Maybe Cena? I don’t know but it’s old fast. This is his first series of matches with actual WWE talent I think. The rest have been locals so are we really shocked he hasn’t lost? Fuck this gimmick. He should have come back as Sheffield and just beat folks ass in regular matches against regular talent. By the way, that entire “Nexus” of talent went completely to shit. Hennig and Slater are jobbing their asses off. Husky is now in FCW as a new character, Otunga is actually the shining star of the group (right now). Darren Young is getting a shot, Tarver got cut (shouldn’t have been there anyway), and Justin Gabriel seems to be lost in WWE Kreatives own confusion. SMH at that whole Nexus thing ending like this….nothing to show for it. 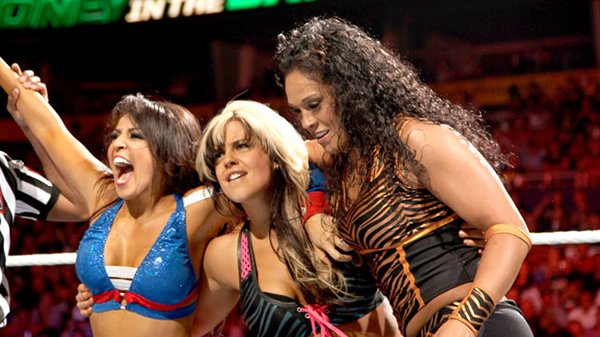 B-Easy: Did they just really throw in a six-women tag match? I’m hating but for a few moments there I thought Kharma was gonna come out and destory everybody but no luck. Guess she may really be done with the WWE. Layla, Kaitlyn & Tamina Snuka won. Okay.

Saule Wright: No Kharma, no fucks given. Layla still sexy tho. 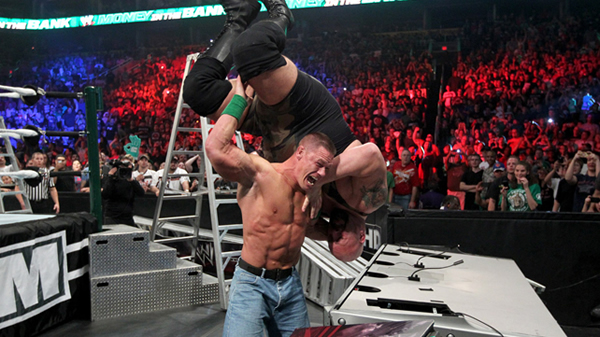 B-Easy: I’m happy they put Miz in this match; they needed more than four wrestlers here. My early pick was Cena and then for him to cash the briefcase in at a official match at Summerslam (I actually wanted Miz to win).

Early on they broke out the big spots with Cena hitting an Attitude Adjustment on Big Show through the announcer table (Crazy). The rest of participants all pilled ladders on Big Show taking him out of the match for a while (When Show did come back he brought back out the giant ladder from his last Money In The Back match).

For the wrestlers involved here (No real high flyers), the match was way better than I thought and it may have been the better MITB match of the night. And yes, Cena did win.

Saule Wright: When you end up booking such a major match with 4 muh’fuckas, we have a problem. It actually ended up being a decent match so there’s that, but there were no shockers outside of Miz return. We all knew Cena would win and he did. They owed him for the epic jobbing he’d been doing at PPV’s.