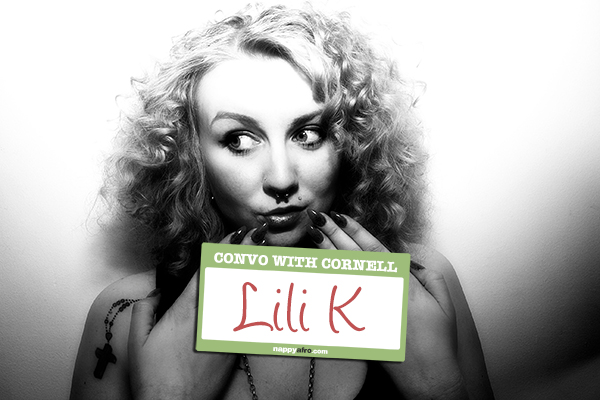 Lili K asked me about a month ago to post some new music she was working on. I enjoyed her music so much I thought I take it a step further. So here we are with a new installment of Convo Eith Cornell.

What did your parents do while you were growing up?

Lili K: My mom is the antique business. Pretty much she raised me by herself. She always has been in music and everything too.

Such as performing or just listening to good music?

How was it working with Thelonius Martin?

Cool. It kinda happened a little bit randomly. I actually had to shoot a video of him because I do like photography and videos on the side. But we go to school together. We both go to Columbia and I had to shoot a video for a class I was in with him. After the video, we were just at his place. And he was like, “Oh, you are here. Let me play you some beats.” So we went through some of his stuff and I ended up liking a few of them. I took them back to the crib with me and then wrote to the one that became “Come In”.

How quickly have you written a song before?

It depends on the song. Some of them take about twenty minutes. That will be about the shortest. Some of them take up to a week to complete. A lot of them do happen in one sitting. I think “Come In” took about half and hour or something like that.

Has a song ever taken longer than a week to write?

I have some songs still that I have written but never actually recorded or put them out like that. But I don’t know if I am going to change anything to them. I don’t think so. A lot of times I will write something in one sitting and then go back and tweak a little bit later.

Do you sing in the shower possibly?

What are some common themes to your music?

Mainly, love and relationships stuff. I feel that is a go-to topic for most vocalists particularly like soul singers. That was a real common theme. With the latest single I released “Curtain Call”, it is definitely deeper. It is not about love at all. It is kinda about internal conflict and dealing with struggles of morality. You are trying to become successful in life and you need to face decisions. But they might not be the most ethical. That is a topic I recently wrote about. There is also some topic on this upcoming project about the struggle of an upcoming artist. Being faced with the whole mainstream music thing and being tempted to give in that. Just because of the possible success that become of it and maintaining true to your art.

Do you ever feel like you are discriminated against?

Definitely. I used to go to jam sessions in Chicago when I first moved here. Not only because I am white but also because I am young. A lot of the older vocalists would look at me like “she doesn’t know what she is doing.” Then I would sing and it would be a different story. That is kinda a general consensus of my life. People don’t take me seriously when I say I am a soul or jazz singer. Then they hear me sing and it kinda makes sense to them after that. It definitely something I need to prove better than talk about. Which is the case for all singers I think. But I definitely feel there is definitely more doubt when somebody hears me I do soul or jazz. As opposed to somebody that is black, who says I do soul or jazz.

How do you feel being compared to artists such as Amy Winehouse and Adele?

Obviously, it is a huge compliment because they are extremely talented. But I also think we are only being compared because we are white. I get compared to Teena Marie constantly. Every where I go “oh girl, you are like Teena Marie.” I am like “no, I’m not. She’s wonderful but we sound absolutely nothing alike”. Our music is not similar whatsoever. Just because we are both white soul singers does not mean we are one in the same. It is so funny to me. I got posted on a blog when I released “Come In”. One of the comments was something like “she is the next Teena Marie” or something like that. Then there was like a thread of comments underneath it of people going back and forth about who’s better between Teena Marie and me. I really just wanted to comment, “you guys, and we’re so different!” If they are talented, I am not necessarily offended by it. I just don’t think it’s accurate what so ever.

What artist of the past do you think is underappreciated or often overlooked?

Rachelle Ferrell is one of my favorites. She is probably my favorite vocalist besides Ella Fitzgerald. She is a jazz vocalist primarily but my God, she’s amazing. She is probably just not very known because she doesn’t do mainstream music. But she is phenomenal. I don’t know anything about her personally. I just know about her music because I love it. That is one. There is an artist named Rudy Currence who has been underground for a little while now. I think he is signed to Ludacris’ label or something like that. But he’s not known yet and he’s amazingly talented. I remember back in high school when he was still like a super indie artist. I found him on YouTube and he is ridiculous. It does not make sense to me that he is not big yet. He is definitely unappreciated and more people should know about him. 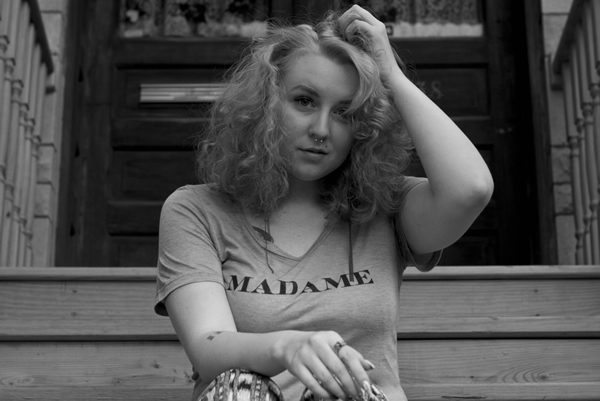 What are you working on now?

Well, right now I am actually getting ready to release my second project with Peter Cottontail. He produced my first EP that I released in July of 2011. It was called Prelude To Hello. I just released the first single off this next project. The single is called “Curtain Call” and the project is called Metal Petals. It is a five song EP also is two remixes from the last project. So it is seven songs total and it is like an electro, soul, hip-hop driven EP. We definitely expanded our poll of influences for this project. It is a little bit more experimental, electronic but still with that neo-soul, hip-hop feel to it that we have tried to maintain in our music.

Are you a sports fan at all?

It is not going to make sense. But I am from Milwaukee but I live in Chicago. I lived in Chicago when I was little as well. When I was little, I got to see Michael Jordan and Scottie Pippen so I was always a Bulls fan ever since I was four. I didn’t get into football until I lived in Milwaukee, which is Wisconsin, which made me a Packers fan. So I am a Bulls fan and Packers fan which kinda contradicts itself. I am into football and basketball.

Are you still mad about the Fail Mary?

You know I am just trying not to concern myself with it so much right now. But I can just throw it in all the Bears fan’s faces that we beat them earlier this season. So I am just going to stick with that for a while.