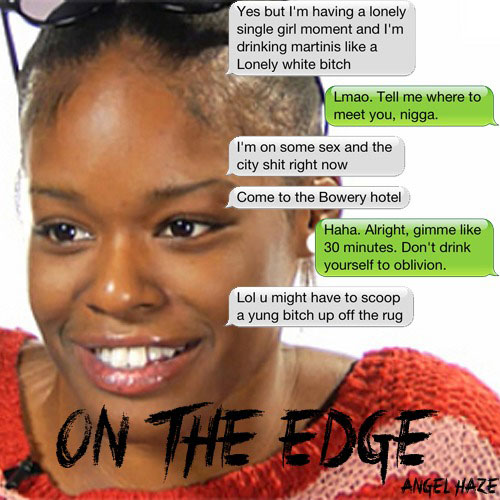 That was quick. Earlier today Angel Haze & Azealia Banks traded shots on Twitter about, uh, I’m really not sure (There was talk about sleeping with each other so that was kinda cool). But now the “beef” goes to another level and we get a diss song by Haze titled “On The Edge”. And I like it; especially the shit talking Angel does and that it has a Biggie sample. It’s not “Either” level but it proves my theory that all women secretly hate each other. I’m all for female MC beef though (Girl fights on wax and such). Azealia is already not impressed.

Sidenote #1: Funny. I like that we didn’t even acknowledge the Cassidy & Meek beef but I post this.

Sidenote #2: Some behind the scenes stuff here at nappyafro. Me & Saule debated on doing a “Best Female MC” category for the 2012 nappyafro Awards. Saule wanted to do it but I don’t know if this shit helps or hurts his case.