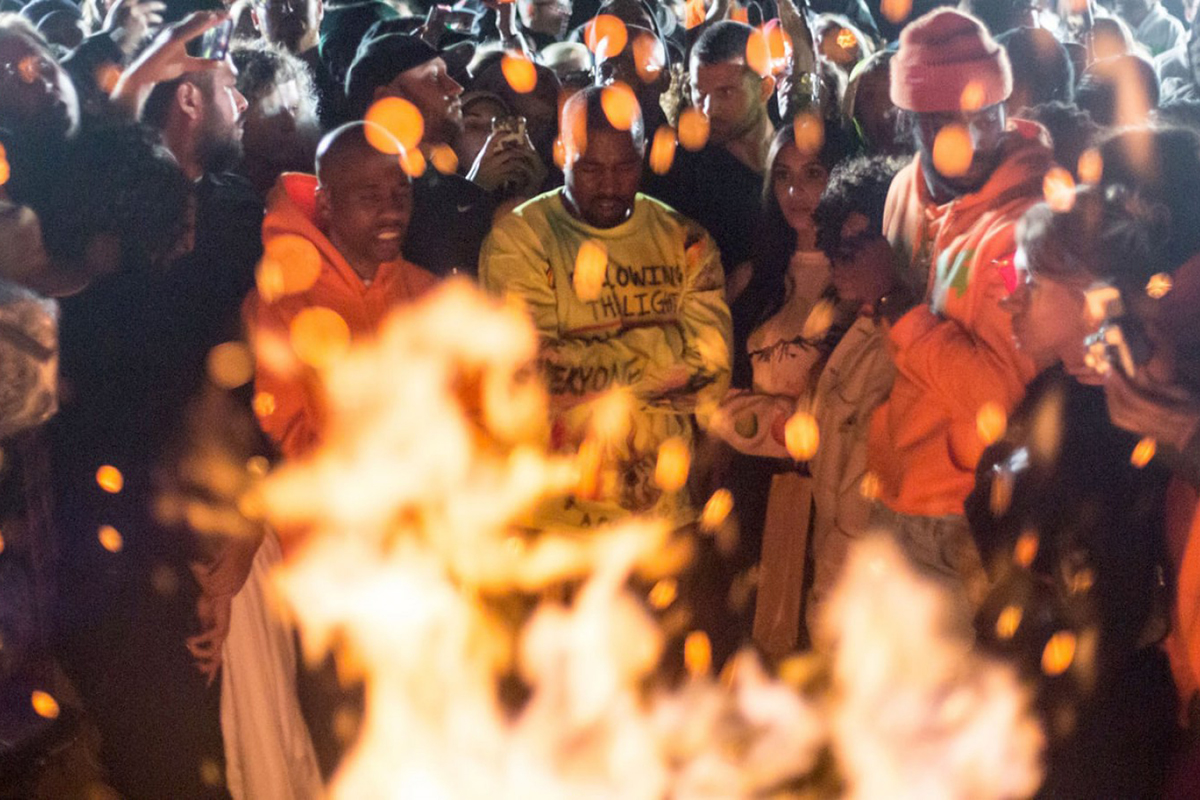 I am just going to be completely honest here… I did not want to listen to this album at first.

These last few weeks have been nothing but frustrating with how to deal with where Kanye West is right now in life. From his declared admiration for President Cheeto, to his free thinking campaign, to him finding a like-minded connection with people who represent the antithesis of everything we believed he stood for until now. At this moment, I have had enough. I had enough of his antics, I had enough of Ye doing things just for the sake of doing them, I had enough of his public outbursts, I had enough of his cries for attention whether for better or for worse. I had enough of having to defend a person I do not know, all because I feel that I have the right to put as much faith in Kanye to be a decent fucking human being for once, just because I felt the masses misunderstand him.

Being a music listener, the separation of the art from the artist is always difficult. I have a hard time recalling the number of times that I have defended listening to Black Metal because the difference in religious beliefs are overwhelming to others. However, as I have noticed over the last couple of weeks, the things that Kanye does….mean JACK SHIT to his fans. The same way people like to throw a blanket over Drake’s mess to fan the flames, that is what they do with Kanye’s antics. The way J. Cole fans will defend his albums as being the most ground-breaking thing to happen to mankind, they put Kanye’s creative genius so fucking high on a pedestal, if his ego grew any bigger, he would have an aneurysm and Kris Jenner would have an entire season of Keeping Up With the Kardashians, documenting the whole damn thing.

Oh!…..Kanye has an album out right?

I wish I could tell you that I know exactly what we are going to get, but I can’t unfortunately. Especially after that troll track “Lift Yourself” aka “scoopity-woop-gate” and “Ye vs. The People” which ended up as a last minute, half-baked, clean-up job after the backlash he received in his endorsement of President Spray-Tan and other right-wing pundits that I will not give myself the time of day to name. I’m going to go into this album with a clean slate (although he doesn’t really deserve one) and just listen to it with open ears and an open mind. Can Kanye redeem himself…artistically at least? Let’s find out!

1. I Thought About Killing You
Produced by Kanye West & Mike Dean
It begins with a melodic backdrop while Ye waxes poetic about his thought process. It is at this moment we begin to realize that Kanye is opening up about his mental health. Contemplating suicidal thoughts, homicidal thoughts, while the pitch-shifted vocals, I suppose are to differentiate him and his inner self.

It is a good start to an album that I don’t know what direction it is going to head into.

2. Yikes
Produced by Kanye West, Pi’erre Bourne, Mike Dean, & Apex Martin
If there is any song on this album that might have “single” potential, it is this one here. He talks about being under the influence of psychedelic drugs and covers a lot of ground as far as content. From the TMZ fiasco to Russell Simmons getting “Me Too’d”, even telling a great line about the “ghosts of Prince & MJ warning him”.

It is becoming apparent that Kanye knows exactly what he is and what he is doing, when he refers to his bipolar disorder as a superpower. With the platform and power that he has, the things that he says and does, is that a good thing or a bad thing?

Ty Dolla $ign and Jeremih’s back and forth exchange in the chorus is flat out corny. He goes into his infatuation for the opposite sex and the content is contrary to ’05 Kanye, where in these days, I guess he will leave yo’ ass for a white girl. It’s “Father Stretch My Hands” all over again. It is a song where there’s too many cringe lines throughout the song that it takes away from any possibilities of me taking the song for what it is and enjoying it either way.

4. Wouldn’t Leave
Featuring Jeremih, PARTYNEXTDOOR, & Ty Dolla $ign; Produced by Kanye West & Mike Dean
As the song begins, at first I immediately thought that it is Young Thug, but I found out later….it was PARTYNEXTDOOR….yawn.

Outside of that, this song is an ode to women who have stayed by their man’s side even when they are fucking up. I get a gospel vibe from this song and Kanye’s singing…I don’t hate it…that counts for something right? He doesn’t really say that the things he’s said (“slavery is a choice”) was right or wrong but more or less describing the outcome of his decisions and actions and pondering the consequences of what it will do to his marriage.

5. No Mistakes
Featuring Charlie Wilson & Kid Cudi; Produced by Kanye West, Che Pope, & Mike Dean
This is a Graduation-era type of production to me. Charlie Wilson and Kid Cudi’s harmonies fit well together. Lyrically, Ye goes into depth on his life since being hospitalized in 2016, from being in debt, drugs, to being dragged through the media and public eye, even though he should be used to it by now. He even takes a light jab at Drake. Let that light skinned nigga live!!!

6. Ghost Town
Featuring 070 Shake & Kid Cudi; Produced by Kanye West, Mike Dean, Francis and the Lights, & Benny Blanco
It is a song that really does nothing for me, just because of how I just been away from Kid Cudi’s work over the last several years and I am just not that in to Kanye as a singer. Despite all of the shortcomings, I can respect the content he goes into depth with, alluding to self-harm.

Hand on a stove to see if I still bleed

Some will look at that as a metaphor to nothing hurting you anymore and becoming numb to the pain. I’m not too keen on this 070 Shake gal, but her vocals are very haunting in the outro of the song.

7. Violent Crimes
Featuring 070 Shake, Nicki Minaj, & Ty Dolla $ign; Produced by Kanye West
Would it be wrong if I thought 070 Shake was Dej Loaf on the initial listen?

With numerous listens, I began to think “Daughters” from Nas. The song plays off the moment that men encounter when they bring a child into the world. Especially if it is a daughter, it begins to alter the way that men treat women and think about women. You learn more, you grow more, your traits in character shift and I can sympathize with Kanye wanting more for his daughters, especially with how him and his wife are perceived in the public eye. I like this track.

Now, if you have made it to this point in my review, first off, thank you. Secondly, you will notice that I didn’t give a clear answer to whether or not I like the song or I don’t like the song, with the exception of “All Mine”. Honestly, this album is something that I cannot rate as separate tracks and calculate a score. The number of times I have listened to this in conjunction with his antics and his comments over the last few weeks, I have a very difficult time, just taking this as another Kanye record or another musical work that I listen to for the day. After all, we are talking about a man, who has a bipolar disorder. A man who encounters different emotions, different highs and lows. I believe this album is the result of one of those highs and maybe one of those lows and with everything that has happened since the “rollout” began, took it upon himself to cover it all in one fell swoop.

Now, while I do not believe this album is trash, it is definitely not one of his greatest works. Yet I have a feeling that Ye is the result of a man trying to figure it all out in real-time. At this moment, we are listening to a man who is becoming aware that he does not have all the answers (Sway) and is learning as he goes. This album is just one gigantic random thought, with no intention of it being understood or able to comprehend for the casual listener and a headache for the most loyal of stans that just wish the old Kanye would return to form.

We are never getting the old Kanye back…not now…not ever….and knowing Mr. Kardashian-West….he could care less….I’ll blame it on the bi-bi-bi-bi-bipolar.

I hope you get all the help you can get Kanye, but with your celebrity now eclipsing the music and the celebrity having an effect on how I and many others look at you, Call it unfair, though right now, it’s difficult to separate the art right now….hell, I can’t be bothered to care at this point.

I guess I am just rambling now. That’s how frustrating this album was. So, I’m going to break usual nappyafro.com review rules. My rating for “Ye” is….