About six months ago, Joey Bada$$ released his debut mixtape 1999. The tape rapidly became one of the most critically acclaimed rap records of the year. It seems like 1999 is every rap nerd’s dream come true: Joey’s a Brooklyn rapper resurrecting that classic New York sound, he spits over beats by Dilla and DOOM, and he’s part of an expansive collective of like-minded rappers, producers, and artists (Known as the Pro Era crew).

PEEP: The aPROcalypse is the group’s debut mixtape. Its release was shadowed by the tragic death of 19-year-old Pro Era member Capital STEEZ (Real name Jamal Dewar) who passed away days after the tape came out. STEEZ released a mixtape of his own in 2012 entitled AmeriKKKan Korruption. He raps over beats by Madlib, DJ Premier, and MF DOOM on the tape and I highly recommend giving it a listen.

I’m excited to hear more from the other Pro Era rappers on this album and it will be interesting to hear how they navigate the usual challenges of the group album. Aside from early Wu-Tang Clan records, group albums very rarely come across as cohesive and they tend to be overlong. Hopefully Pro Era can dodge these problems.

1. Like Water
Performed by Capital STEEZ, Joey Bada$$, & CJ Fly; Produced by Statik Selektah
The tape starts off with a piano-based beat courtesy of Statik Selektah who scratches in vocal samples from Common and Nas, a couple of guys who seem to have sonically influenced the members of Pro Era. More than those two rappers, the artists that Pro Era most reminds me of are A Tribe Called Quest. Lyrically, Q-Tip and Phife were amazingly talented, but their rhymes were relatable and never boring. They talked about race, the music industry, and crime, but they also talked about girls and partying. At their best, Pro Era do the same thing. CJ Fly spits punch lines with a rapid-fire elastic flow on this song, “You don’t smoke -ism, I’ll introduce you, not a buddah abuser, feel like a Bad Boy when I take two puffs.” He appears on seven tracks on the tape, which is tied with STEEZ for the second most (Joey appears on 12 tacks).

2. Run Or Fly
Performed by Joey Bada$$, Dirty Sanchez, CJ Fly, & Capital STEEZ; Produced by Lee Bannon
Dirty Sanchez might not have the greatest rap name (Having a bad name didn’t stop ODB from becoming a legend though) but he spits confidently and flows effortlessly over a great Lee Bannon beat on “Run Or Fly”. After two tracks, it seems like this album is going to be both laid-back and lyrically impressive. This is a rare combination. Usually, laid back and hazy beats accompany repetitive weed rap (Curren$y makes good music, but he really only talks about three or four different things).

3. Wrecord Out
Performed by Nyck Caution, Joey Bada$$, & CJ Fly; Produced by Chuck Strangers
Chuck Strangers is Pro Era’s in-house producer and he excels at making beats with classic-sounding samples and hard-hitting drums. Nyck Caution, Joey, and CJ Fly aren’t too introspective here, and mostly stay away from the third-eye talk. Instead they take the opportunity to do some bragging and flex their wordplay skills.

4. F A Rap Critic
Performed by Chuck Strangers, Kirk Knight, & Joey Bada$$; Produced by Statik Selektah
Statik Selektah’s beat on “F A Rap Critic” lifts a Method Man line for the hook and is full of lush strings and a slick bass line. The song features the first of Chuck Stranger’s two verses on the tape and we hear from Kirk Knight for the first time. On this track and on “Like Water,” Statik Selektah’s beats mesh very well with the Pro Era throwback sound. Going forward, it will be interesting to see if any Pro Era members collaborate with producers with different or more modern sounds.

5. The Renaissance
Performed by A La $ole & Joey Bada$$; Produced by Statik Selektah
A La $ole absolutely demolishes this track and he does it with an energetic delivery that is totally different from, but still complimentary to Joey’s typical style. Joey, similar to Jay-Z, is almost perpetually locked-in and rarely seems to fly off the handle. However, on this track, he feeds off of A La $ole’s fired-up vibe and goes in:

Five finger shoplift, hot list when I drop this
Over the Metropolis
Only place you be is where yo metro feeds
Nigga, stop it, I’m in the cockpit, with the pilot
Money I pile it, stylin’ Impalas
God emcees spitting Rikers Islands

6. Florists
Performed by Kirk Knight; Produced by Kirk Knight
Kirk Knight produces and spits solo on “Florists” which might be my favorite track thus far on PEEP: The aPROcalypse. The beat samples a Madlib track and Knight’s flow (especially the first half of his verse) reminds me of something that MF DOOM would spit. “Florists” ends with a sample collage of rappers shouting out Brooklyn.

7. Interlude 47
Performed by Capital STEEZ, Joey Bada$$, CJ Fly, & Kirk Knight; Produced Statik Selektah
On “Interlude 47” four members of the Pro Era crew talk about getting with girls over the tape’s final Statik Selektah beat. I’m really surprised how much CJ Fly sounds like Wale on this track, especially because he raps nothing like him anywhere else on the tape. 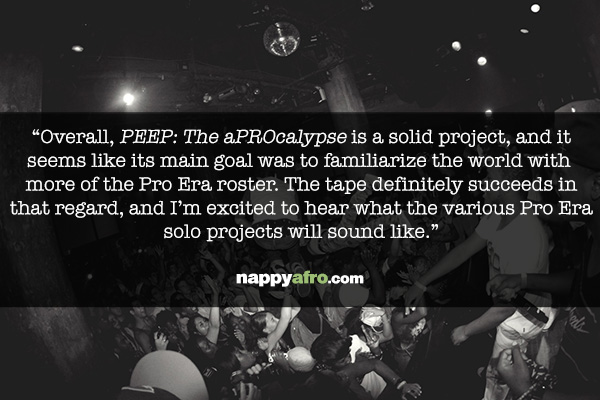 8. Resurrection of Real
Performed by A La $ole & Nyck Caution; Produced by Tre Eiht Special
A La $ole is back over another Tre Eiht Special instrumental, who’s beat here would fit in next to vintage RZA production. After another great verse, $ole is really standing out on this tape, and Nyck Caution’s verse comes out of the gate rapid-fire and doesn’t let up.

9. Vinyls
Performed by Dessy Hinds, Capital STEEZ, & Nyck Caution; Produced by The Entre Producers
As good as every rapper in Pro Era is (I haven’t heard a weak verse yet), this mixtape is suffering from a lack of storytelling. Similar to the Sean Price album I reviewed a couple of months ago, the flows and punch lines on this mixtape are unquestionably solid. But to really connect with listeners, you need to tell stories and give them something cinematic to visualize.

10. School High
Performed by Joey Bada$$, Dyemond Lewis, Kirk Knight, & Nyck Caution; Produced by brandUn DeShay
It’s the album’s smoker’s anthem, and as the title says, it’s about going to class while baked so naturally no one comes across sounding too inspired, it’s a pretty low-stakes affair. Nyck Caution does finish the song off with an impressive verse though.

11. Overseas
Performed by Joey Bada$$, & CJ Fly; Produced by Hans Solo and Jonas Cook
Joey Bada$$’ collaborated with CJ Fly on the 1999 stand-out “Hardknock”. The subject matter on “Overseas” isn’t as deep as on that track, but the two young emcees display a similar level of good chemistry. Along with a second Joey Bada$$ tape, CJ Fly’s debut project is allegedly in the works. I’m really interested to see how these young rappers are going to evolve over the next few years on their solo projects.

12. Natural
Performed by Dessy Hinds & Nyck Caution; Produced by Marvel
Even though this album uses beats from a handful of different producers, the sound of the album has remained consistent throughout. Even though it was released in the dead of winter, this would be the perfect album to ride around to with the windows down during the summer.

13. K.I.N.G.S.
Performed by Joey Bada$$, & Capital STEEZ; Produced by Thelonius Martin
Similar to how Wu-Tang always peppered their lyrics with Five Percenter references, the members of Pro Era regularly rap about their third eye vision and opening up their chakras. “K.I.N.G.S.” is especially focused on this philosophy, and both Joey and STEEZ deliver on-point verses on the subject. Joey’s first couple of bars especially are extremely well written:

My days numbered to infinity, when I close my eyes
I see the trinity, mind, body, & soul holds the energy
But they don’t know the inner G, I try to keep serenity
But enemies, always try to end me and my entity

14. Start to Finish
Performed by Joey Bada$$ and Rokamouth; Produced by Chuck Strangers
Hopefully in 2013, rappers outside of Pro Era will start asking Chuck Strangers for beats. It would be great if the Pro Era sound was able to spread through hip-hop similar to how the Lex Luger sound exploded after Waka became popular. That Luger influence has currently manifested itself in the form of the Chicago drill scene, which produced the other highly-hyped teenage rapper of 2012, Chief Keef. These two young rappers couldn’t be more different. Keef takes the violence in the city around him, and funnels it into his music. Joey on the other hand, raps about how he needs to change his life, so that he can succeed and build a family.

15. Last Cypher
Performed by CJ Fly, Dyemond Lewis, A La $ole, Dessy Hinds, Nyck Caution, Kirk Knight, Rokamouth, Joey Bada$$, and Capital STEEZ; Produced by brandUn DeShay
The greatest thing about giant posse cuts like this is debating who had the best verse, so I’m going to rank my top-three performances on this track:

17. Lawns
Performed by Chuck Strangers, Joey Bada$$, & Kwame; Produced by Lee Bannon
This is probably the weakest track on the album, but it doesn’t sound like it’s supposed to be taken that seriously. After the final verse ends in a misspoken line, Chuck Strangers sings a few goofy lines and the tape ends in some yelling.

Bottom Line:
Overall, PEEP: The aPROcalypse is a solid project, and it seems like its main goal was to familiarize the world with more of the Pro Era roster. The tape definitely succeeds in that regard, and I’m excited to hear what the various Pro Era solo projects will sound like. A La $ole especially emerged as a rapper I’d like to hear more from. The mixtape is not as focused or as solid lyrically as 1999, but the beat selection is consistent throughout and the album’s best tracks merit repeat listens.