Has Hip-Hop Devolved Into Pro-Wrestling? 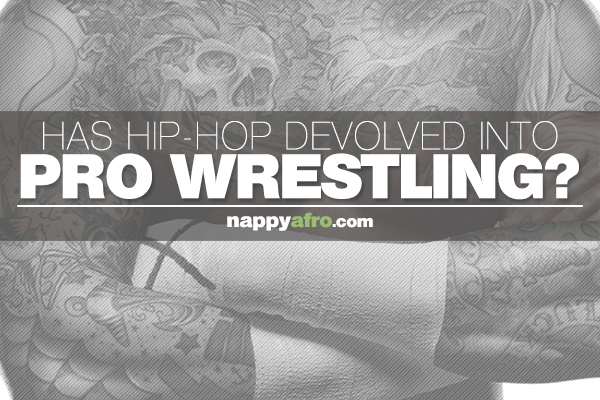 Hip-Hop has changed drastically since its inception. Before it gained mainstream dominance in the music industry, it was originally just an accessory to house parties, a diversion meant to keep things fresh. This evolved into competition between rappers, each of whom claimed they were the best. And as it spread throughout the United States it eventually gained it’s own niche in the music industry, growing larger and larger until it took over the industry and changed it forever. What started as just one stylistic element of a greater culture quickly and unexpectedly moved to the forefront of music. It gained acceptance on radio, in stores, and at the Grammy awards.

And yet, like everything else, it was only a matter of time before the business executives behind the front desks got their hands on it and worked to distort it into the commercial package that makes the most money for everyone involved. The set formula has, of course, changed with the zeitgeist, but as time has continued on, we’ve seen Hip-Hop being packaged in prettier and prettier packages. Today’s Hip-Hop seems to be a glossier version of things we’ve seen before, shined up in a marketable package for everyone to enjoy and then sold back to us for .99 cents a song.

Ubiquitous cameras and the internet have forced the genre into a strange place by increasing the chasm between the real world and the images that are being sold to us and put into our heads. Where before you took a rapper at face-value and judged him only on his skills and how much you enjoyed his/her music, you now have a way to measure if what they’re saying is true or not, and often we’re finding that it isn’t. It takes suspension of disbelief to a level we haven’t yet seen. Think the Roxanne Wars, but on a genre level scale.

It’s no secret that rappers stretch the truth. Everyone knows 2pac went to an art school and was best friends with Jada Pinkett-Smith before he became a rapper. We know that Biggie wasn’t as big a drug dealer as he proclaimed in his music. With any artistic craft, the truth is often stretched intentionally to express emotions or a point rather than just accuracy for accuracy’s sake. Every rapper is a storyteller, whether they are Nas rapping in “I Gave You Power” or Trinidad James in “All Gold Everything”. Rappers are each selling their own particular image to the public, and it’s always just been entertainment. Jay-Z summed it up best in “Ignorant Shit”:

So don’t believe everything your earlobe catches/It’s mostly backwards/Unless it happens to be as accurate as me/And everything said in song you happen to see/Then, actually believe half of what you see/None of what you hear, even if it’s spat by me/And with that said, I will kill niggas dead…

Jay-Z knows all about how much of Hip-Hop is fabricated. In 2011, Lil’ Wayne threw shots his way, threatening to kidnap his wife and “take him out”. But Jay just shrugged it off. “That’s sport, that’s music. Nothing is going to change.” Later that same year, he responded with a subliminal of his own on “Mr. Nice Watch”.

But how far can entertainment push the limit? Since “Ignorant Shit” was released in 2007 (but actually recorded much earlier than that), Hip-Hop has pushed it’s levels of grandiosity further than ever. Within this same genre, we have a former child star spewing death threats over Top 40 hits and a former CO bragging about his imaginary drug dealing days under an alias he stole from someone else. We have beefs that start, last a couple songs and then fizzle out (or possibly lead to bottles being thrown in clubs) and then mentions to the press and on twitter of altercations and the threat of pressing charges against guilty parties before retracting it. And all of this conveniently two weeks away from this year’s Grammy Awards.

Rick Ross in particular has charted out a career that has left me positively dumbfounded since the entire CO incident. What exactly was Ross’ response to this news coming out? Did he ever address it publicly? Twice, actually. The first time he denied it, and the second time he admitted it was him. But his next move was genius: he acted like nothing happened. Instead of scaling back, he doubled down harder than ever, and people just moved on. Simple as that.

Drake’s career is also a noteworthy example. He started as a backpack rapper, signed a deal with YMCMB, and changed his whole style. He went from admitting back in ’07 in the song “Closer” that violent references are necessary to be successful (“When you hollerin’ at labels and they silencing you back/cause you fail to thoroughly discuss some violence in your track”) to his circa 2011 rap persona, which got him a Top 20 single in “Headlines” doing exactly what his ’07 self wouldn’t (“You gon’ hype me up and make me catch a body like that/No, don’t do it…”). His excuse is that it “happened over time”, but I could care less about the fact that it happened. I’m more interested in the why, which seems obvious to me. It’s all for entertainment. And why not? He can get away with it, right?

However, real life always conflicts with the imaginary, and it usually isn’t pretty. Rick Ross’ recent touring woes and drive-by shooting incident make that much very clear. But it also unintentionally adds to his authenticity. How many post-shooting records are we going to get that highlights the incident, along with boast here and a threat there?

It reminds me very much of Professional Wrestling. You know the moves are scripted and much of their histories are fabricated. And yet your eyes are glued to the screen. The only thing that matters in the music industry is how marketable you are and will your face look good on posters. And that same mentally has slowly worked it’s way into Hip-Hop, and now it’s too late. As much as people say they want a resurgence, they want a return of real Hip-Hop and truth and authenticity to the genre, they still consume the same commercial product that we as fans consume. There is no returning to the old ways, because the record companies have figured out the formula that works. That’s that. Unless you fit the bill, later. Good luck on the underground circuit.

But why? Why is that we keep watching, keep calling ourselves fans despite the obvious strings being pulling in the background? Because you’re willing to allow the part of your mind that would normally say, “Hey, isn’t that not really true?” to be shut off for the sake of entertainment. It’s all in the name of fun and enjoyment, so we can play something that accurately reflects our mood and puts us in a space we want to be in. But it’ll cost you .99 cents for 3-4 minutes, sometimes less.

There will of course be the shout from the peanut gallery: “Where have you been? It’s always been like this!” To that I would whole-heartedly agree. Beefs have never been expected to spill out into real-life, a la the East Coast/West Coast Feud. Image has always been everything in the music industry. And artists have always stretched the truth. But I would argue back that in order to be a listener in this day and age, you’re required to suspend your belief much more than you would’ve had to in the past. And the reason for that is, it’s impossible to hide anything anymore. Once you’ve entered the spotlight, we’re going to know everything about your real past, no matter how much you try to hide it, no matter how much you deny it.

But at the same time, it has not affected our enjoyment of the music much, because our capacity for suspending that belief has also increased. When it comes down to it, we aren’t buying accuracy or factual evidence. We’re buying a product. That’s what every rapper currently working in the industry is making and selling back to the public. And the most successful know that all you have to do is give the people what they want, and they’ll buy it.