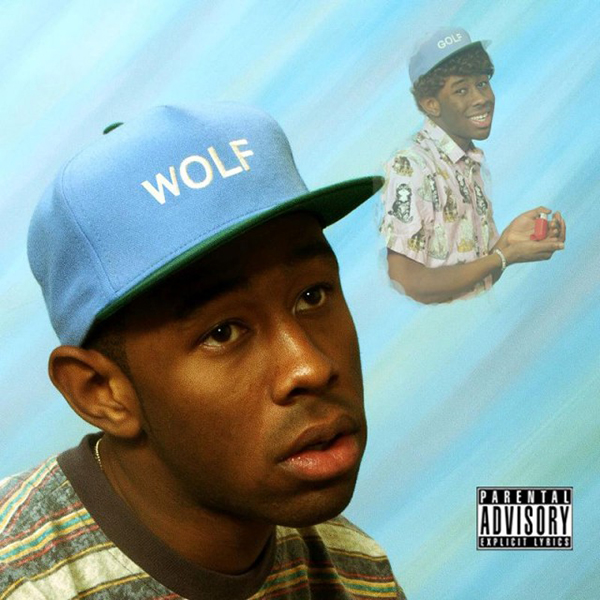 Halfway through the album on my first listen, a thought popped in my head. I am actually listening to an album from Tyler, The Creator. This is the same weird skater dude that does more antics for attention than putting focus on his music. In the last two years, I have heard about how he and the rest of Odd Future are really talented. Except for Franck Ocean and The Internet (Syd tha Kid & Matt Martians), I really paid them no attention. While I have enjoyed Wolf Haley’s production in the past, I have always thought his rhymes were really simple and featured no factual subject matter; just made up stories for shock value: rape, murder, etc. Surprisingly, I actually find myself enjoying a large number of tracks from his album, Wolf.

By the end of the instrumental of the album opener, listeners are introduced to the character of the new kid at summer camp by the name of Wolf. Throughout the album, there are several skits at the end of songs that tell us about Wolf’s interactions with his new peers. Interesting enough, the main subject of most of the songs is Tyler himself. There are a lot of tracks with great storytelling from his own personal experience except for “48”, where he portrays a drug dealer with a conscience, which is still worth a listen for the commentary from Nas. “Colossus”, is an amusing story about Tyler being cornered at an amusement park by overzealous fans, but the best tracks are when he is emotionally open on songs like “Answer” where he wants his long lost Dad to answer if he ever calls, and “Lone” which tells the story of Tyler’s last interaction with his grandmother before losing her to cancer. On this album, which he solely produced, there are songs where the production is the main showcase. The three songs in the form one, “Party Isn’t Over/Campfire/Bimmer” featuring Lætitia Sadier & Frank Ocean and “Treehome 95” featuring Coco O. and Erykah Badu feature little to no rapping from the Odd Future Wolf Gang Kill Them All leader.

Honestly, I am really amazed at how much I like the songs on this album. For some reason, I keep going back to “Tamale”. The song sounds like a remixed version of Bauuer’s “Harlem Shake” and features an incredible voice screaming “Tamale” and “Golf Wang” repeatedly. After some research, I found out the singer’s name is Tallulah Belle Willis, Bruce Willis & Demi Moore’s daughter. With that said, there are some songs that I really do not see myself listening to everyday. “Jamba” and “Slater” are just forgettable fillers. “Pigs” is dark in tone and subject matter as it tells the tale of a bullied kid that finds a group of victims like him and gets revenge on the popular kids in school with the force of their hidden accessories under their trench coats. “Trashwang” is a boring cypher track after hearing the verses on “Parking Lot” with Casey Veggies & Mike G and the Earl Sweatshirt & Domo Genesis collaboration “Rusty” with a great verse from Tyler with the line that made me laugh the hardest, “I’m harder than DJ Khlaed playing the quiet game”. This album would get a four star rating if a couple of songs were cut but overall it is a great listen and I finally understand when people say, “Tyler, The Creator is talented”.