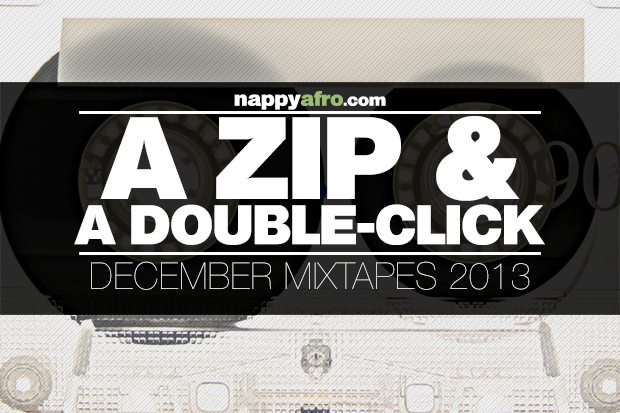 Welcome to the final A Zip & A Double-Click column of 2013. The mixtape game stayed strong this year, young artists like Chance The Rapper and Migos used tapes to launch promising careers, producers like Mike Will and DJ Mustard used tapes to establish their brands, and major label artists like Pusha-T and Big K.R.I.T. are still using mixtapes to hold over fans between albums. I had a great time keeping up with all of these trends for this column and I’m looking forward to doing it all over again in 2014. Before I get into December’s best tapes, I’d like to give you a quick rundown of my personal top tapes of 2013. Also be sure to check out the 2013 nappyafro Awards: Mixtapes of the Year list.

My Ten Favorite Mixtapes of 2013 (a.k.a.You Should Download These Tapes Immediately):

1. Chance The Rapper – Acid Rap
This is the best mixtape, album, anything of 2013. Chance The Rapper is quickly ascending rap’s ranks off the strength of this tape and if his next project is as good as Acid Rap, it won’t be long before he takes his place among the game’s elite.

2. Deniro Farrar – The Patriarch
This is the most slept-on project of the year. Deniro Farrar makes unforgiving, dark, and unbelievably honest music. Most rappers sound like they’re struggling to come up with new things to rap about, Farrar sounds like he has so much on his mind that he can barely fit it all into his bars.

3. Run The Jewels – Run the Jewels
Killer Mike and El-P have told us to expect a Run the Jewels sequel in 2014 and I can’t wait. El’s production brilliantly splits the difference between punishing and psychedelic. The two rappers use this project as a contest who see who can dream up the most insane threatening lyrics.

4. Pusha-T – Wrath of Caine
Before he released one of the best albums of the year, Pusha Ton let loose one of the year’s best mixtapes. I think it’s incredible that some of these tracks missed the cut for My Name Is My Name. “Millions” is easily one of the hardest tracks I heard all year.

5. Alexander Spit – Mansions 2
Even great producers can make beat tapes and they’ll just sound incomplete because they don’t have anyone rapping on them. It’s extremely rare to hear an instrumental project that stands up on its own and Mansions 2 is definitely one of them. This is Dilla-level production.

6. !llmind – Happy B-Day J D!lla
Speaking of Dilla, !llmind cooked up four bangers to remember the Detroit-bred legend on his birthday and these beats do a lot to honor Jay Dee’s legacy. You’ll fully understand the quality of these tracks if you take a ride around town with this tape pouring out of your speakers.

8. J. Cole – Truly Yours
Cole’s Born Sinner is nappyafro’s album of the year. And before he dropped that project, he geared fans up with a pair of free EP’s. This first of those EP’s blends storytelling with beautiful organic beats for a brief but exceptional project.

9. Deniro Farrar – The Patriarch II
Not satisfied with having just one of the best mixtapes of 2013, Farrar came back with more of what made The Patriarch so great. If you’re in the mood for insightful storytelling, gorgeous beats, and gifted flows you’re going to want to download The Patriarch II.

10. Vic Mensa – Innanetape
New music has been exploding out of Chicago this year. The city is full of gifted singers, rappers, instrumentalists and producers, and Vic Mensa used Innanetape to establish himself as one of the most talented artists of this new generation.

One more thing before I get into December’s mixtapes. This month, two projects resurfaced that are a few years old by a rap group called Instrumentality. One of this group’s members is a young Chance The Rapper and while he understandably doesn’t sound as good as he does on Acid Rap, these tapes are still worth checking out. You can get them here and here.