The Best Moments of The nappyafro Forums 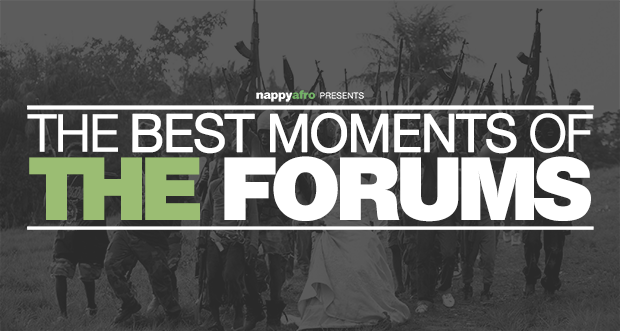 All good things must come to an end and we’re sadly announcing that we’re closing up The Forums. The reason for ending The Forums? It’s a few things: Cutting resources and lack of participation are the probably the biggest reasons. Towards the end, it was mostly just me posting stuff there so we just replaced all The Forums stuff on the main site with the official nappyafro Tumblr (It’s pretty cool so you should probably check that out. Also, sexy women).

But hey, this is more of a grand closing thing so as we’re closing a chapter in the nappyafro history book, let’s look at the greatest moments of The nappyafro Forums.

Thanks to all the members that signed up (all 731 of you) and to the people who just signed up, uh, I’m sorry (There’s always the main site and our social media spots).

Sidenote: The Forums aren’t immediately closing. It’ll probably be around until April but we are taking all of it’s references off the main site (Mostly located at bottom of the main site). So it’s still there. For now.