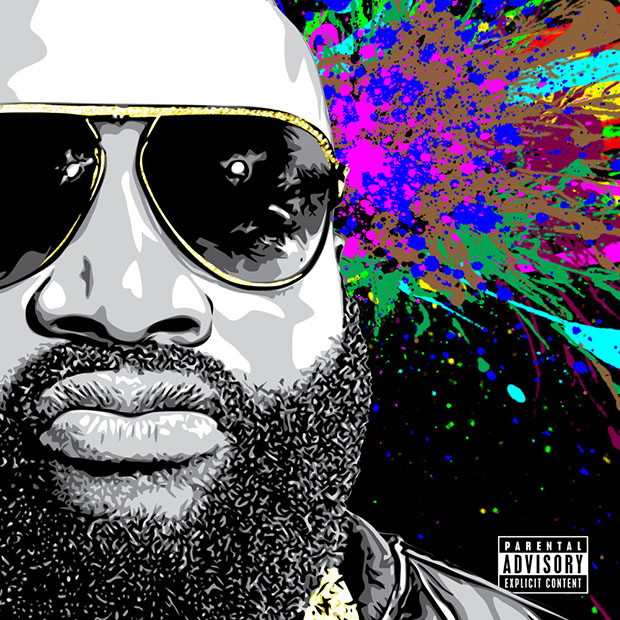 Rick Ross has had one hell of a career. This guy has seen it all and done it all. The BAWSE Rick Ross (not to be mistaken with drug lord Freeway Ricky Ross) is the founder of the Untouchable Maybach Empire, which includes Hip-Hop’s megaphone Meek Mill, the boy who might as well be a sensitive lightskinned negro Wale, Stalley, Omarion, open coke-head Gunplay, and French Montana. (we’ll see him later).

The BAWSE Rozay has survived a lot throughout his career. Once a picture of him as a correctional officer popped up everyone saw him as a fraud. He survived a war with then beef king 50 Cent. Last year he was shot at in his car, and had some medical issues. Somehow he walked through it all and built a stable empire with successful artists behind him. His last album was “ehhhh” (Eminem voice), but he swore that Mastermind is on a different level. We gonna see. UGH!

1. Intro
This is a different way to kick off the album. It starts with his “Maybach Music” female intro, originally heard in “Maybach Music” featuring Jay-Z. It turns into a static type compilation of all of his hits and clips of some of his verses. Ross has always been able to start an album off aight.

2. Rich Is Gangsta
Produced by Black Metaphor
This is one of those smooth, soulful joints. You gotta smoke to this beat. This is for the boys who feel like 1 mil after they get the tax return. Ross takes time to reflect on…being rich. There really isn’t too much here. It’s kinda a reflective joint. I ain’t too mad at it, there isn’t too many bars here for you cats who love the lyrical miracles. “If you love hip-hop, bust them shots.” To the point bars from the BAWSE.

Please hold while I locate your information. Your checking account available balance is $92,153,183.28. This reflects the most current information available on your account.

Ross decides to remind us AGAIN how much richer he is than everyone else. Thanks a lot for that nonsense Ross. This is the beginning of me questionin’ this man’s past life. Hell, last time I checked he was a C.O…but he’s richer than me, so I can’t say nothin’. This is a change of pace from “Rich Is Gangsta”. It’s a setup for the rest of the album. Jake One has had better joints here than this production.

4. Shots Fired
Now THIS is a hell of a setup for the controversial joint about to come next. Listen closely to the cool news clips about when he was shot at. Its cool…NOW…THIS IS WHEN IT GETS REAL…

5. Nobody
Featuring French Montana & Diddy; Produced by Diddy, Stevie J, DJ Enuff, & Jiv Poss
WOW….WOOOOOOOOW. WHAT THE HELL. THE DISRESPECT IN THIS JOINT IS UNACCEPTABLE…to an extent. SKIP THIS PART OF THE REVIEW IF YOU DON’T KNOW “You’re Nobody (Til’ Somebody Kills You)” by the late great Frank White. C’MON SON…FRENCH MONTANA? OUT OF ALL THE PEOPLE? This joint don’t move you like the original, not at all. I can’t believe Ms. Wallace was down with this. I’m not COMPLETELY upset, but the first time this HURT my SOUL. NO..NOOOO..I don’t know how to feel…next man..

R.I.P to THE Notorious B.I.G. Speaking of…

6. The Devil Is A Lie
Featuring Jay-Z; Produced by Major Seven & K.E. On The Track
NOW THIS IS WHAT I BEEN LOOKIN’ FOR. THIS IS THE TYPE OF MAGIC THAT’S SUPPOSED TO HAPPEN. I don’t know who Major Seven is..but he and K.E. made MAGIC on this beat. This sounds like I’m ridin’ on a white horse on the way to a coliseum wearin’ a robe made of dead lions.

Now I’m black Jesus turn water to wine
And all I had to do was turn the stove up
Beast Coast, winnin’ at life, nigga, cheat code
The hatin’ is flagrant, hit your free throws
The devil try to hit me with the RICO, them black people
Devil want these niggas hate they own kind
Gotta be illuminati if a nigga shine
Oh we can’t be a nigga if a nigga rich?
Oh we gotta be the devil that’s some nigga shit
You seen what I did to the stop and frisk
Brooklyn on the Barney’s like we own the bitch

The ALL TIME GREAT Jay-Z decides to bless this track with some BARS. Ross was cool..but Jay came and addressed Satanic rumors, and conspiracy theories. Who lost their rhymin’ skills?

7. Mafia Music III
Featuring feat. Sizzla & Mavado; Produced by Bink!
Not too sure what’s happening here. This is the albums first “skippable” joint. Joint kinda wack. You are lying if you say you understand this without Rap Genius. This reminds me of Wayne’s “Mo’ Fire” joint from Tha Carter II, only with no fire to it…*yawns*..NEXT…

8. War Ready
Featuring Jeezy; Produced by Mike Will Made It & A+
It’s great to see that Rick Ross and Jeezy have finally settled the petty ass beef they had over God knows what. Salute. If you’re a fan of ear-splitting bass then this is for you. This joint sounds like a bunch of gorillas beatin’ on their chests. Mike Will is an expert at this type of joint. Jeezy decides to come in and chew this beat up. Ross really moved out the way like Dywane Wade did for LeBron James. The hell is happening on this hook though? Either way this is kinda tight, i’m feelin’ it. VINTAGE JEEZY.

Box Chevy hit the block, run the whole 50 shots
You just poppin’ ’til you know you can’t pop ’em no more
We done came through the block in so many colored drops
And these mothafuckas think you can’t drop ’em no more
All right, a nigga put some change on your head
Damn right, fuck around, clear my safe out
I got a few digi scales and a couple Denzels
And you mothafuckin’ right, this a safe house
Give me the K and a shovel, I’ll bury that nigga
Be his pallbearer, so I can carry that nigga
What you gonna hit him with, the Glock or the chop?
Look I wouldn’t give a fuck if they were sharin’ that nigga

9. What A Shame
Featuring French Montana; Produced by Reefa & Stats
SHAME ON A NIGGA WHO TRIED TO RUN GAME ON A NIGGA, WU BUCK WILD WITH THA TRIGGA! …wait..this ain’t the classic Wu-Tang joint? WAIT..French Montana again? WAIT…he’s jackin’ a famous Hip-Hop hook? I’m not mad at the beat, but he’s REALLY tryin’ to piss off Hip-Hop heads on this album. AYO…the pace on this album keeps switchin’. HAAAAAAANH. I’m sick of French, but this beat is NASTY. NASTY. Ross comes with somethin’ to address the haters here. He reminds us that niggas are jealous of his cash (..again). Don’t skip this joint. 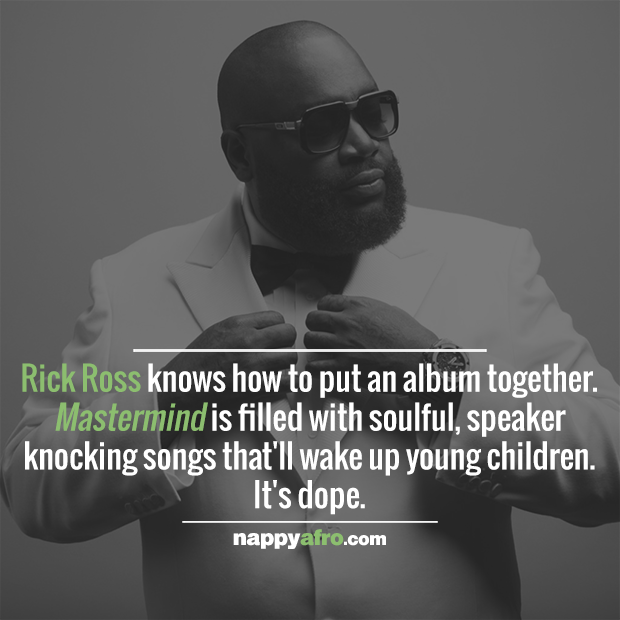 10. Supreme
Produced by Scott Storch
Nah y’all this ain’t the real Katt Williams. This is Drake’s impersonation from Saturday Night Live. This is some REAL grown man music. This is some real BAWSE type ish. YO..this is great, Storch made a banger..Scott Storch man..it’s been a while. This man had quite a few hot joints in the early and mid 2000’s, and was forgotten cause he did a whole bunch of dumb things. This made me wanna 2-Step in a 3 piece suit. DON’T SKIP THIS.

11. Blk & Wht
Produced by D-Rich
This is some some smooth gangsta type music. Yo..this is the drug talk we were lookin’ for. Bop your head as you visualize everything this man says here. This guy mentions his Wingstop ownership all the time tho, this nigga loves chicken. Plenty of metaphors for cocaine here. This is the type of joint I gotta ride to on the highway.

12. Dope Bitch (Skit)
These are the type of hoes that the average broke bros cant stand. This was a long ass skit listening to females talk about the stuff they like about being rich, and how a rich dude should be with money. This was annoying so I changed it after the first minute. *YAWN*.

13. In Vein
Featuring The Weeknd; Produced by The Weeknd & DaHeala
This is somethin’ for the ladies who enjoyed The Weeknd’s mixtapes. I personally dig the joints that the crackhead has made..I can ride with this. A lot of Abel’s joints are sex joints, but this is just extremely chill music. You may fool around and fall asleep. This really ain’t even about the raps de Rozay. I can vibe to it, hmmm..

14. Sanctified
Featuring Big Sean & Kanye West; Produced by Kanye West, Mike Dean, & DJ Mustard
NOW THIS IS A PROBLEM. The Betty Wright sample? OOOOOOOOOH LAWD. The most surprising thing here? Big Sean didn’t mess nothin’ up here. NOW LET’S TALK ABOUT KANYE. Y’ALL GONNA LEARN TO RESPECT YEEZUS. He really decides to attack this joint with no mercy. I felt like doin’ the Cripwalk lightly through some church aisles when I heard this joint. WOW.

And wash my sins in the blood of Jesus
People sayin’, “Ye we need another Yeezus” (Ross grunt)
Lames try to tell me, “Cut the wilin’ out, out”
But who the fuck is you reachin’
Pass me 30 bottles, champagne procession
That’s that Holy water, sanctified refreshments
God sent me a message, said I’m too aggressive
Really!? Me!? Too aggressive!?

This is VINTAGE Kanye. He spazzes out on this song and Rick Ross did some justice too.

15. Walkin’ On Air
Featuring Meek Mill; Produced by D-Rich
How y’all feel about your speakers? This is the Rick Ross we’ve come to know. There’s bars here but the beat is generic. The beat doesn’t really matter here, but Meek Mill actually comes in and bodies the beat. I ain’t upset with this at all. You gotta turn the volume down a little on Meek’s verse though. Gangsta joint right here.

16. Thug Cry
Featuring Lil’ Wayne; Produced by J.U.S.T.I.C.E League
THIS IS THE WAYNE I REMEMBER. THIS IS THE DUDE THAT USED TO BLACK OUT ON SONGS. THIS AIN’T THAT GUITAR WIELDING ALIEN VS. PREDATOR LOOKIN’ BASTARD THAT WE’VE COME TO KNOW. I hope he shows up on Tha Carter V. WOW. AND there’s a “93 Til Infinity” sample in here? OOOOOH. This is Ross at his most introspective. Oh man, I fool with this joint. But WAYNE..this is what we’d come to expect from dude a long time ago.

Well let me light one for my problems
Smokin’ on that loud, pumpin’ up that volume
Get it crackin’ like an eggshell in this motherfucker make omelettes
Get a bad bitch that posts up like comments
They don’t know what I been through, don’t know what I’m goin’ through
As long as I get through that’s what I look forward to
Richer than a bitch but still I can’t afford to
Let these niggas play with me; need to be remorseful

This is an amazing way to close out the album. Ross with a reflection on his career as the beat drops out..

Bottom Line:
Mastermind is leaps and bounds better than God Forgives, I Don’t. There’s no argument. I was thoroughly impressed with the beat selection, and some bars (even though dude decided to cross a few lines..). The guest features for the most part didn’t slack, and Rick Ross stepped up at all of the right places. Rick Ross knows how to put an album together. Mastermind is filled with soulful, speaker knocking songs that’ll wake up young children. It’s dope.