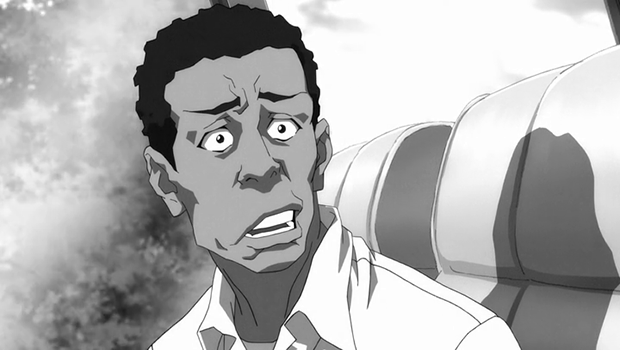 I’ll admit that I was high on the last few episodes of The Boondocks, but now I’m back to “meh” status with this week’s episode, “Freedom Ride or Die”. It’s the PBS documentary-style retelling of Robert Freeman’s participation with the Freedom Riders, the civil rights activists who rode interstate buses into the segregated southern United States back in the 1960’s.

“Freedom Ride or Die” does have it’s moments like Robert using a belt to fight a crowd racists and Uncle Ruckus’ part in the whole ordeal. But the subject matter and corresponding jokes felt like it would have been better as a flashback than a whole episode. Shout out to Sturdy Harris though.

Sidenote: I didn’t watch this episode when it originally aired on Adult Swim, but the version I later watched didn’t bleep out any curse words. Don’t tell me that Adult Swim is letting f-bombs go on cable television.