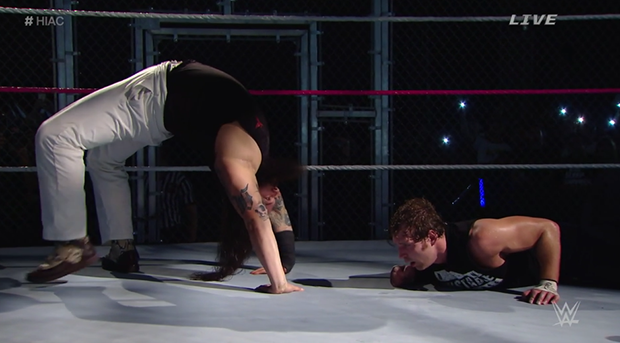 The 2014 edition of WWE Hell In A Cell got a lot of hate before it took place on Sunday for a few reasons. From the fact that the WWE World Heavyweight Championship wouldn’t be defended or that it’s title holder, Brock Lesnar, probably wouldn’t be in attendance to even what Hell in a Cell match would actually be the “Main Event”.

Now that it’s over, I have the same feeling I have for a lot of recent WWE pay-per-views (Or whatever you call them these days): It wasn’t that bad. Yeah, there were certified bathroom breaks but there were also good moments too.

But the most talked about match of the night was easily the second Hell in a Cell match featuring Seth Rollins versus Dean Ambrose. They didn’t do anything like Mick Foley famously falling from top of the cell (Although the match did start on top of the cell) but they did do a double Shawn Michaels fall from the side of the cell (Among other crazy spots). Which brings us to the GIF of the Night:

The end of the match saw Ambrose setting up the revenge Curb Stomp on Rollins (Cement bricks included). The lights turn off to the sounds of Bray Wyatt speaking in tongues. The lights come back on. Hologram lantern? Bray attacks Ambrose. Rollins get the pin.